“All of existence shall be mine.” 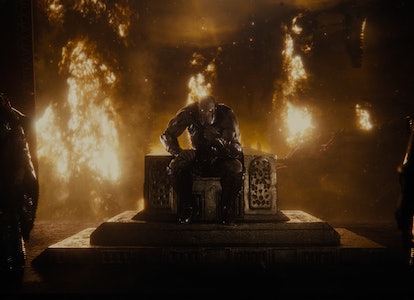 Darkseid creates some high stakes in Zack Snyder’s Justice League, now streaming on HBO Max, promising to conquer all of life and bend it to his will. But can he really accomplish such a feat? Or is it simply villainous pontification?

While the DCEU is just beginning to explore the concepts established in Jack Kirby’s 1970s DC Comics epic, New Gods, it turns out that conquering all existence is very much in play for Darkseid. But to achieve that he needs the Anti-Life Equation.

Wait ... the Anti-what? Ahead, we dig into one of the most dangerous pieces of DC Comics canon.

What is the Anti-Life Equation?

Name-dropped several times throughout Zack Snyder’s Justice League, the Anti-Life Equation is, at its core, the solution to dominating all sentient lifeforms by eliminating free will.

Initially designed by legendary comic book creator Jack Kirby, the Anti-Life Equation has been featured in various ways throughout DC’s vast history and multiverse, appearing as drawings, words, subconscious desires, a deity, and even emails.

In Grant Morrison’s 2005 series Seven Soldiers: Mister Miracle, the equation is described as:

In Zack Snyder’s Justice League, Darkseid’s disgraced general, Steppenwolf, comes to realize that the Equation’s location, lost to Darkseid thousands of years ago, is on Earth. As if the death of Superman wasn’t enough to draw the attention of the Lord of Apokolips, the secret of Anti-Life is the excuse he needs to bring his entire armada to Earth, hence the post-apocalyptic Knightmare timeline that haunts Bruce Wayne’s dreams.

That’s right: Anti-Life helps explain the Knightmare. For those wondering what the deal with evil Superman is in Batman’s nightmares, it’s likely not the Man of Steel as we know him. If under the spell of the Anti-Life Equation, Clark Kent has been removed from Superman’s consciousness and replaced entirely by Darkseid’s will, essentially making him one of the universe’s most powerful weapons.

Why the Anti-Life Equation is so dangerous

Darkseid’s Anti-Life Equation can be viewed as a parasite, not entirely different from the Cordyceps fungus from the video game series, The Last of Us. Cordyceps attacks a sentient host and replaces its tissue, eventually controlling the mind of the host.

Where the Cordyceps fungus results in a physical change, the Anti-Life is purely emotional, making it impossible to know whether the person standing next to you, a former ally, a friend, or even a lover, has been taken over by Darkseid’s will. When truly examined, the Anti-Life Equation appears to have less in common with natural science and more to do with political science.

While there doesn’t appear to be any public record of Jack Kirby explaining the inspiration for the Anti-Life Equation, he was a staunch opponent of fascism, if his iconic cover of 1941’s Captain America Comics #1 where Cap punches Hitler in the jaw, didn’t make that clear enough. Darkseid is the ultimate fascist, subjecting people to his rule not simply through violence, but through his message.

As conceived by Kirby, Darkseid’s message was initially spread by Glorious Godfrey, the comics creator’s take on evangelist Billy Graham, and someone who could compare to any number of high-profile MAGA supporters today. In fact, MAGA boasts strong parallels with the Anti-Life Equation, and is surely worth examining if the DCEU continues exploring the concept.

So, what chance does the Justice League stand in the face of Anti-Life? Luckily, there’s one thing that stands in the way.

What can defeat the Anti-Life Equation?

This equation contains all colors of the Emotional Spectrum, which is used to delineate the various Lantern Corps beyond just the Green Lanterns. Mastery over rage, greed, fear, will, hope, compassion, and love create life, embodied by the White Lanterns, who have the ability to counteract Anti-Life. It may help explain why the Lanterns weren’t yet introduced in Zack Snyder’s Justice League, instead saved for a future battle.

Undoubtedly if Snyder gets the opportunity to complete the arc he had planned for Justice League, there will be a lot more Anti-Life to be explored on the cinematic side of DC’s storytelling. Hopefully, with the heroes and villains united, there will be enough strength to create a Life Equation to stand in its wake.