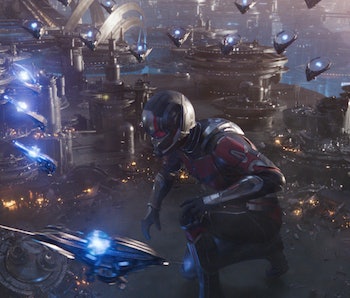 Marvel can’t stop what-iffing. From the Multiverse of Madness to Loki, and now, the Quantum Realm in the upcoming film, Ant-Man and the Wasp: Quantumania, the myriad of realities in the Marvel Cinematic Universe seems endless.

Recently, the writer of the film, Jeff Loveness, told Empire that the Quantum Realm itself is “Jodorowsky’s Dune within Marvel.” While this hyperbole might make a certain amount of sense, this nerdy cinematic sci-fi deep cut feels cringe, even if it ends up being awesome. Here’s why.

Jodorowsky’s Dune is two things: An eye-opening, well-researched 2013 documentary from Frank Pavich, and also, a never-filmed version of Dune, which was attempted by Alejandro Jodorowsky in the mid-1970s. This version of Dune didn’t even film one single frame and has long been described in reverent tones by cinephiles as a kind of holy grail of movies that were never made. Getting into the specifics of Jodorowsky’s Dune requires a lot of patience and time, but Pavich’s documentary is a good place to start. (In my forthcoming book about the entire history of Dune, I spend nearly 7,000 words on Jodorowsky’s Dune, because there’s a lot to cover. )

But, if you’ve somehow never heard of it, here’s everything you need to know about Jodorowsky’s Dune in one sentence: An avant-garde filmmaker tried to make a 14-hour movie version of Dune, which would have been wildly unfaithful to the Frank Herbert novel. It was filled with of all sorts of disturbing sexual imagery, maybe would have starred Mick Jagger, and accidentally recruited talent — Dan O’Bannon, Mœbius, Chris Foss, and H.R. Giger — who later helped create Alien in 1979.

What does Ant-Man 3 have to do with Dune?

The short answer to this question is: nothing. As far as we know, Ant-Man and the Wasp: Quantumania, has nothing to do with Dune, and the comments from Jeff Loveness were designed to elicit an aesthetic tease. This tease might also indicate the movie is awesome, which is surely what Loveness intended. And yet, the comparison is strange. The substance of Jodorowsky’s unfilmed version of Dune is unknowable, because the movie never happened, meaning, if anyone is comparing an actual movie (like Ant-Man 3) to Jodorowsky’s Dune, that comparison is probably about aesthetics only, which doesn’t tell us that much.

Because Jodorowsky’s Dune — the unmade film, not the documentary — made use of three massively talented concept artists (the aforementioned Mœbius, Foss, and Giger), the visuals for this hypothetical film are objectively stunning and arresting. In the recent explosion of A.I. art, even more visuals for Jodorowsky’s Dune have been created, which has even led, hilariously, to a bunch of beautiful A.I. art, for “Jodorowsky’s Tron,” which, of course, never existed. (Tron has even less to do with Dune than Ant-Man.)

In his op-ed for the New York Times about A.I. art and “Jodorowsky’s Tron,” Jodorowsky’s Dune documentarian Frank Pavich calls the result of these images “a kind of turbocharged pastiche.” This is probably the best description of A.I. art about nonexistent sci-fi movies, but it also helps to describe the shorthand Loveness seemed to evoke when comparing certain aspects of Ant-Man 3 to Jodorowsky’s Dune.

Seemingly, for Loveness “the Quantum Realm,” is all about an artistically gonzo version of Marvel. But, here’s where all of this gets a little strange and unsettling. As an aesthetic comment, comparing something — like a Marvel movie — to Jodorowsky’s Dune is fine. But, there’s also something disingenuous about branding a faux version of the Jodorowsky aesthetic as a ready-made point of reference that film nerds can suddenly use to describe anything. In Russian Doll, it's funny when Nadia uses “Jodorowsky’s Dune” as a secret backroom password. It’s less cute when a screenwriter on a franchise Marvel movie does it. It’s a reductive fake category for a complex historical event. And, the reality is, the allusion to the Jodorowsky aesthetic has nothing to do with anything because there is no actual movie version of Jodorowsky’s Dune.

Furthermore, whether it’s a comment from Loveness about the trippy feeling of the Quantum Realm, or A.I. art about “Jodorowsky’s Tron,” the big detail getting left out of this is simple. The sci-fi aesthetic being referenced here is actually the result of art and ideas created by Dan O’Bannon, Mœbius, Chris Foss, and H.R. Giger, too. Yes, Jodorowsky brought them together to help make his (failed) version of Dune, but, if we’re referring to the overall surrealist feeling of what we can imagine about Jodorowsky’s Dune, those other artists need a little bit of credit.

If the Quantum Realm is a kind of funhouse mirror for Marvel, it should also remind us of Marvel a little bit too. Jodorowsky’s take on Dune was poised to be notoriously unfaithful to the source material. Is that what we hope Ant-Man 3 is to the rest of Marvel? Unfaithful and transgressive?

In fairness, that’s probably not what Loveness meant. But, the connotations of comparing something to Jodorowsky’s Dune implies much more than just trippy sci-fi art. At least in this universe, anyway.

Ant-Man and the Wasp: Quantumania hits theaters on February 17, 2023.