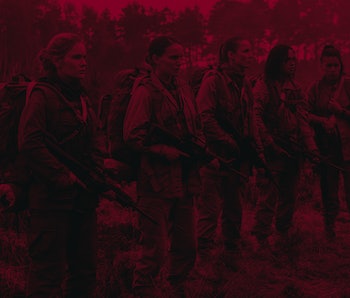 Bestselling author Jeff VanderMeer is best known for the Southern Reach trilogy, which includes the award-winning first volume, Annihilation, later adapted to screen in what would become the must-watch sci-fi thriller of 2018. He joins Inverse Happy Hour to do a special reading from his latest novel, Dead Astronauts (a part of his Borne series), and take us on a deep dive into his next epic fantasy, A Peculiar Peril, out July 7.

“I just wanted a rollicking kind of adventure that was fun but also plot-wise was probably a little more traditional or intricately plotted in terms of ... characters and pieces coming together,” he tells Inverse.

During the Q&A, VanderMeer shares how Annihilation's visual motifs bear a similar quality to Alex Garland's newest show, Devs; what the process was like for turning the Borne series into a show coming to AMC; and the nocturnal cameras he has set up around his house to capture the wildlife creeping by in the dead of night.

He also has a handful of book recommendations, including Brodeck's Report for something “strange and surreal” and Vernon Subutex's offbeat Despentes as a “pretty amazing dissection of French society” — all of which he promises will reward readers.

Below are the Inverse Happy Hour editorial highlights:

On the ending of Annihilation in the movie vs. the book— “The main thing for me is that I’m just an imperfect witness to the movie because, you know, we visited the set — the book is very different from the script — and then we saw a rough cut where I believe, for example, the bear scene wasn’t actually voiced by the actor. So it was just some dude going, ’help me.’ And then the music wasn’t fully in place for the last scene, and let me tell you, the music really makes a huge difference in how you can pace that thing. Because you couldn’t go on that long with the whole mimic thing if you didn’t have the music. I really don’t think you could get away with it.”

“So, you know, if I have any regrets, it’s just going through the process and realizing that a lot of the environmental stuff had been stripped out, but at the same time, it’s because of the Annihilation movie that tons more copies sold, which got the environmental message across and gave me a lot more opportunities to do other shows and movies.”

On his next book, A Peculiar Peril— “It’s the misadventures of Jonathan Lambshead, and there are a few different things going on. It’s kind of an epic fantasy but also set mostly on war on this alternate Earth where magic’s very wild and an alternate-Earth Aleister Crowley is running a Franco Germanic empire with a disembodied head of Napoleon as his military advisor. And Napoleon’s still having a thing about his height. He insists on being at the top of this pneumatic column that towers over everyone. And Charlemagne’s a character resurrected as a giant month and they’re talking marmots.”

“Why in Narnia did the talking animals overthrow a fascist white witch only to accept a constitutional monarchy?”

And it answers the question of, in part, you know, why in Narnia did the talking animals overthrow a fascist white witch only to accept a constitutional monarchy? I never really understood why they did that, why they didn’t just kick all the bastards out. So in part, this series, which has a lot of intrigue and a lot of armies aligning but also some very personal stuff as Jonathan, this 15-year-old, tries to navigate this world which he discovers through a door in his grandfather’s mansion.”

“So it has, like, that kind of traditional setup. And then it gets kind of, like, there’s a lot of humor, even a lot of slapstick humor in it. And a lot of the villains turn out to have hidden depths and turn out to not be exactly as you might expect.”

A huge thanks to Vandermeer for joining us!