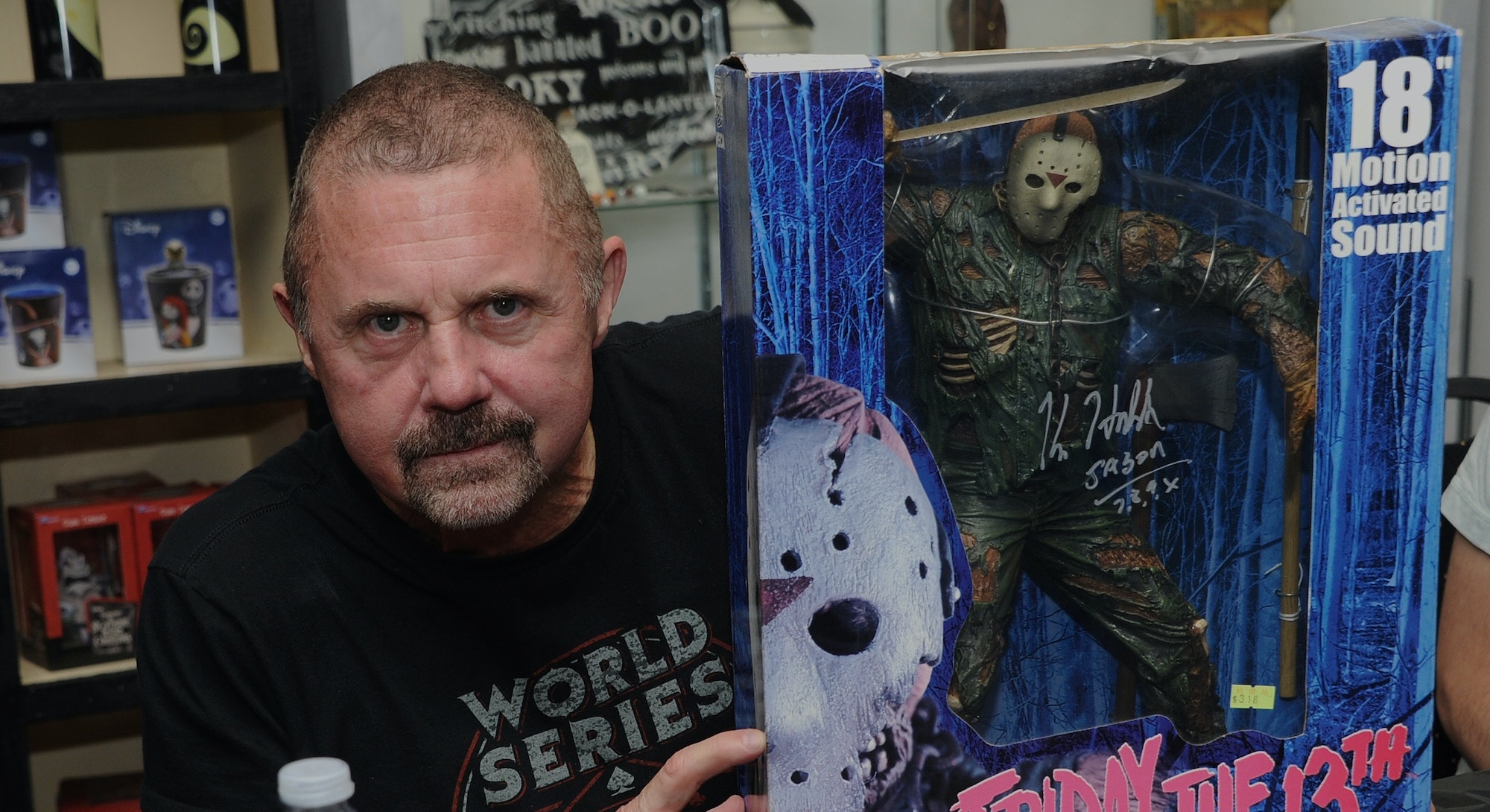 Of the eight different actors who have played Jason Voorhees on film, Kane Hodder is the closest thing we have to the one true Jason.

Hodder first joined the franchise in 1988’s Friday the 13th Part VII: The New Blood as the seventh actor to play the knife-wielding mass murderer. At the time, he thought he was just the latest in a long line of succession, but Hodder went on to own the role for three more movies.

“When I first was signing autographs, I used to put ‘Jason #7’ because that’s all I was at the time,” Hodder tells Inverse. “Once I was told I was doing Jason takes Manhattan, I dropped the seven, but I would assume that's a more valuable autograph because I only did it for like 11 months.”

Hodder’s run with the iconic hockey mask took Jason from Manhattan to Hell (sort of) before sending a cryogenically frozen Jason into outer space in the year 2455 — only for him to wake up and slaughter a bunch of futuristic teenagers.

Released 20 years ago in April 2002, Jason X marked the end of Hodder’s record-setting run, which notably doesn’t include Freddy vs. Jason (2003) despite earlier promises from the studio. According to Hodder, New Line Cinema promised him the role and even showed him a script, only for director Ronny Yu to cast someone else.

“They told me, here’s your script, we’re finally doing this,” Hodder says. “Then they hired a director and he wanted to do something else and they were okay with it. I always thought that was kind of shitty to do. Don’t tell somebody they're doing it and then fucking fire them, you know? It was just very disappointing.”

“Some people were born to play murderously violent.”

Despite the setback, Hodder’s career isn’t showing any signs of slowing down. After playing Jason, Leatherface, and even Freddy Krueger (or at least, Freddy’s clawed hand at the end of Jason Goes to Hell), Hodder launched his own horror franchise with Hatchet and has over a dozen projects currently in the works, according to IMDb.

Despite being one of the busiest mass murderers in Hollywood, Hodder took the time to speak with Inverse on the 20th anniversary of Jason X (his final time behind the mask — for now). I asked my friend Tom Herrmann, a scary movie obsessive who runs the Astoria Horror Club in Queens, NY to interview Hodder to mark their occasion. Check out their interview below.

Tom Herrmann: Let’s start at the beginning. How did you first get cast as Jason?

Kane Hodder: I had been working in stunts for about 10 or 11 years and one movie I worked on was Prison with Viggo Mortensen. John Carl Buechler did the makeup effects and he asked me, “I have to have somebody in a big prosthetic makeup, are you interested?” I hadn’t really done a big makeup so I said yes. I played a character called Forsythe.

“Some people are natural performers when it comes to wearing shitloads of makeup.”

According to Buechler, some people are natural performers when it comes to wearing shitloads of makeup. He had been doing this a long time and was impressed with my enthusiasm. It is not easy. You can hardly see. You can’t speak. You can’t breathe very well.

The following year, Buechler was hired to direct Friday the 13th Part 7 and he said immediately, “I know the guy that I want for Jason.” I played the character and also was a stunt coordinator and did some of the big stunts myself as well. And you know, the rest is kind of history for lack of a better term.

What sets you apart from all the other actors who played Jason?

When I was officially hired, I went back and rewatched all the previous movies, and I said, “What can I add to this character that hasn’t been done before?” I’d look in the mirror and if I wasn’t moving, I didn’t look threatening because there were no facial expressions, no voice. That’s where I came up with the kind of the heaving chest because even though he’s motionless he still looks like he’s about to explode. I thought, if it looks scary to me, it’s probably going to work with the audience.

“You would have loved the earlier cuts where some of the really violent stuff was still in.”

Other fans say they love how I turn my head first in the direction I’m gonna go, and then my body turns and goes. The first time somebody told me that, I didn’t know it, which is a testament to doing something that feels natural. I don’t know if it sounds fucked up to say, but I think some people were born to play murderously violent.

What was the initial reaction to your version of Jason?

The response was so good even though every single scene in the movie was cut to almost nothing by the ratings board. It was just the worst possible timing where they wouldn’t leave hardly anything in the film and they still give it an R rating. So so much of the film was cut and it was still popular. I just always wish people could have seen what we really shot. If you thought the final product was decent, you would have loved the earlier cuts where some of the really violent stuff was still in.

Jumping ahead to Jason X, what did you think when you found out the plot of the movie?

I was like, “Oh my god, are fans gonna like this, or is it too much?” You know, Jason in space? I was a little concerned it might be hokey or something. But my ultimate feeling was that the setting doesn’t matter as long as Jason is the same. Jason’s still going to do the same stuff just in a different location. I tried to make it feel like the Jason fans expect and I think that pretty much came out.

“I was a little concerned it might be hokey.”

You know, Part 7 was, I think, a seven-week shoot. Part 8 was eight weeks. Jason Goes to Hell was like six weeks. And then Jason X was 12 weeks. So we had a bigger budget and far more time to really focus on scenes that people felt were important.

What was your favorite part of shooting Jason X?

It was certainly comfortable because we shot the whole film on a soundstage, even stuff that appeared to be outdoors.

Jason X was also the easiest because it was just the headpiece and then a little bit on the body. Part 7 was full-body latex and Part 8 was a wetsuit on top of latex. Jason Goes to Hell, of course, was a full-body also. For Part 7, if my call time was 6 pm, I’d have to be in the makeup chair at 2:30. It took three-and-a-half hours to put that stuff on every day. That gets pretty tiring, but it makes it easy to bring the anger when it’s necessary.

Is there a chance that you would come back to a sequel in the future?

I would certainly welcome playing the character again. It was a huge shock when I didn’t play Jason in Freddy vs. Jason, and not just because I expected it. Even though I did four films in a row, I still wouldn’t assume that I’m doing the next one.

“She hands me the Freddy vs. Jason script and says, we’re finally doing this.”

But I was called into New Line Cinema with an executive, Stokely Chaffin, just her and I in her office. And she hands me the Freddy vs. Jason script and says we’re finally doing this. We had been talking about it since Jason Goes to Hell because of Freddy’s hand coming out of the ground and grabbing the masking, remember that right? That was my hand.

Yes, you’re the only person to play both Freddy and Jason.

Right. So when they told me, here’s your script, we’re finally doing this, that’s when I go, “Okay, I’m doing it.” Then they hired a director and he wanted to do something else and they were okay with it. I always thought that was kind of shitty to do. Don’t tell somebody they’re doing it and then fucking fire them, you know? It was just very disappointing.

We’re almost out of time, but I want to thank you for taking the time to talk to me.

Yeah, I just appreciate that you wanted to talk about it because it is a good memory, not just the franchise but that film, in particular. It was a lot of fun. Not being rushed on the set is a nice feeling for an actor. “We’re running out of light. We got to do this stunt now.” That kind of stuff is not what you want to hear if it jeopardizes safety. So I just appreciate you even doing a piece on this movie because it is one of my favorites.