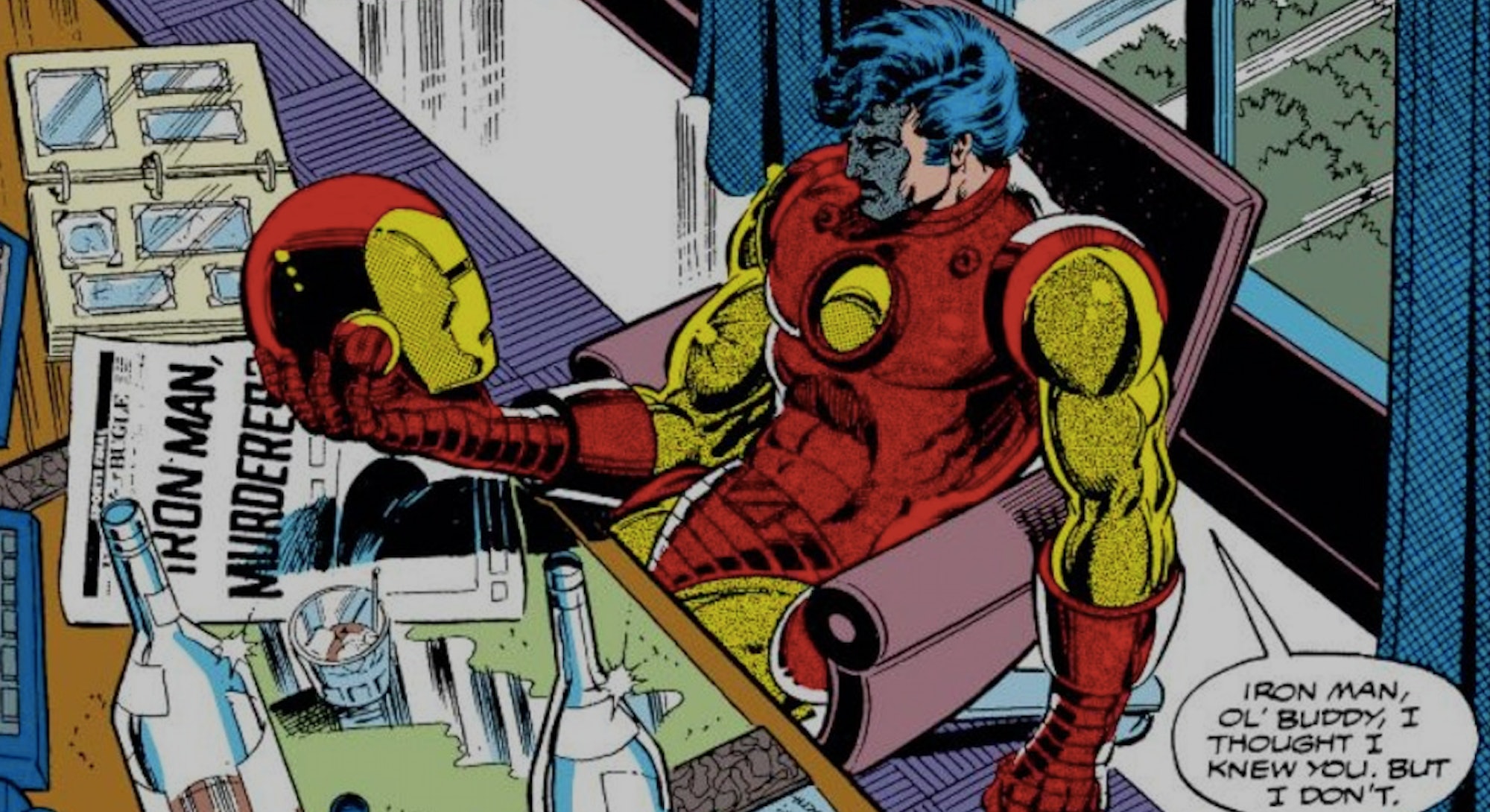 When comics readers think of Tony Stark, they think of him as a brilliant inventor, an Avenger, and... an alcoholic.

That last factor has become such an integral part of the character’s identity many would believe it was there from the beginning. But it wasn’t until March 1979’s The Invincible Iron Man #120 that writers David Michelinie and Bob Layton — and artists John Romita Jr. and Carmine Infantino — took Stark down that particular rabbit hole of vulnerability.

From issues #120 to #128, later collected and known by the title of the last comic of the run, “Demon in a Bottle,” Tony Stark showed just how human he really was as he struggled against an adversary more powerful than any costumed villain.

Iron Man: Demon in a Bottle

Most readers likely recall the end of the story arc. Even the cover stands out: Romita Jr.’s famous art features Tony Stark sporting a five o’clock shadow, dripping in sweat, and staring at his reflection in a mirror as a bottle and the Iron Man helmet rest on the table in front of him. However, the beginning of this story was a little less memorable.

The story opens with Iron Man and Namor teaming up against Roxxon Oil, an evil petroleum conglomerate in the Marvel universe. Suddenly, Iron Man’s armor malfunctions, sending him crashing to the ground mid-flight. After running diagnostics, Stark doesn’t find anything wrong.

Subsequent issues find him facing off against Whiplash, Blizzard, and Melter without any tech problems. But everything changes when Iron Man is invited to a ceremony in honor of a foreign ambassador. His armor malfunctions again, causing him to fire a repulsor blast at the ambassador and leaving him dead.

From there, things quickly spiral out of control. Stark is forced to give up his armor and resign from the Avengers. He even loses his majority share in Stark International. While his superhero status keeps him out of jail, he’s lost the trust of the public, his friends, and his colleagues.

Eventually, we learn that the armor malfunction was caused by longtime rival Justin Hammer in a bid to gain control of Stark’s company. But even after stopping Hammer’s plot, Tony can’t undo the damage that’s been done. Instead, he increases his alcohol consumption.

In Iron Man #125, Tony Stark goes on a bender. In issue #127, he yells at his trusted butler Jarvis, saying, “You’re just a butler, Jarvis, a servant! And in the future, I’ll thank you to remember your place.” Jarvis resigns after the incident but returns two issues later once Tony apologizes.

From a modern lens, Tony’s alcoholism plays a bit like an after-school special in which Tony’s abuse quickly turns to addiction and then sobriety. While the cover of #128 suggests a darker struggle akin, the interior issue is pretty tame. By the end of “Demon in a Bottle,” Tony is sober and hopeful thanks to the support of Jarvis and his then-girlfriend, Bethany Cabe.

While the issue seemed resolved, Tony’s struggle with alcoholism became a reoccurring problem, which gave it a layer of veracity the original storyline didn’t quite have. He doesn’t stop being an alcoholic. He instead learns to live sober.

By Iron Man #167, Stark was drinking heavily again amidst an Obadiah Stane takeover. As a result, he gives up the mantle of Iron Man to his friend James Rhodes. Tony eventually recovered, though not before almost freezing in a blizzard in Iron Man #182.

By the mid-‘90s Tony was actively going to Alcoholics Anonymous, and later became a sponsor for Carol Danvers. His alcoholism was retconned so “Demon in a Bottle” wasn’t the start of his problem. Instead, it ran in his family and began when he was a child.

By the beginning of the 21st century, Tony had been sober for years, a fact that Scarlet Witch preyed on during Avengers Dissambled (2004) in which she manipulated Stark’s mind to make him feel and act inebriated, which immediately concerned his fellow Avengers.

Soon afterward, Tony Stark would make his biggest leap yet, and his problems with alcohol would go with him.

Tony Stark in the MCU

It seemed like a sure bet that when it came time for Iron Man to make his film debut, his alcoholism would be a key part of his character, especially with the casting of Robert Downey Jr. who had experienced his own battle with addiction.

Jon Favreau’s Iron Man (2008) opened the door for his alcoholism, depicting him as a frequent social drinker. Iron Man 2 (2010) went further, specifically in a scene where a depressed Tony Stark has a few too many at his birthday party, puts on his Iron Man suit, and trashes his own house while it's still full of partygoers.

Stark had issues with alcohol and responsibility, certainly, but he wasn’t a full-blown alcoholic. As the MCU progressed onward, it became clear that particular addiction would never make its way on screen.

Following Disney’s purchase and distribution of Marvel Studios films, Tony’s alcohol consumption lessened. What we saw instead was an addiction to technology as a means to confront a fear of powerlessness. He used his skills as an inventor to co-create Ultron from his technology and built increasingly elaborate suits.

Downey Jr. portrayed Stark as having a personality that was highly addictive, and a desire to exert control when he felt his personal life was out of his control. Even without alcohol, Downey Jr. was still able to explore the vulnerability of the character through that lens.

In Avengers: Endgame, when Stark returns to Earth and confronts Steve Rogers (Chris Evans), he plays the scene like a drunkard. It’s a moment audiences remember because it caught them so off guard to see their hero brought this low, even without substance abuse. Stark’s personal journey in that film: to retreat into the woods, start a family, make amends with Rogers, and bond with his own father, have all the tenets of a recovering alcoholic trying to make peace with who he is.

While we never got a straight adaptation of “Demon in a Bottle” like fans hoped for when the Iron Man franchise began, we still got an exploration of similar character traits through a character whose armor hides his own insecurities. The MCU’s Tony Stark has always invited audiences to empathize with his struggle, and hopefully, we can all carry that empathy with us into the real world too.