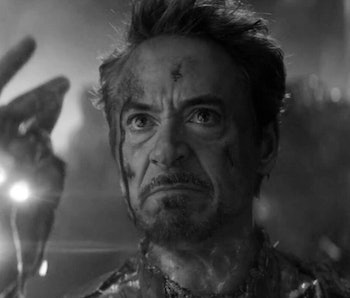 Avengers: Endgame’s time-travel mechanics have been hotly contested by Marvel fans these past two years. The climactic Marvel movie left many questions remained unanswered — including the specifics of how Steve Rogers got his happy ending with Peggy Carter — and presented plenty of plot holes for future films to tangle with.

Or did it? One new Endgame theory speculates that the film could use one of its most massive moments to wipe the slate clean of not only Thanos but also its finale’s biggest complications.

The Theory — As advanced by TikTok user @dreadpiratedad, this fan theory speculates that, in the heat of his heroic sacrifice, Tony Stark used the Infinity Stones to erase Thanos and his army – and then simply kept going, smoothing out any lingering wrinkles in time the film had created earlier.

Paradoxes possibly created in Endgame include the future Nebula killing her past self, and Steve erasing the same branch timeline once home to the Thanos Tony later snapped into dust. But Tony’s snap could provide solutions to practically every such paradox created in Endgame.

The Brilliance of Tony Stark — Avengers: Endgame makes it explicitly clear that no one in the film — Bruce Banner (Mark Ruffalo) included — understood time travel as well as Tony. The genius inventor would likely be aware of any timeline issues that could have stemmed from the events of Endgame and could feasibly know what he’d need to do in order to prevent them sabotaging the victory he and the other Avengers had fought so hard to secure.

Since wielding all six Infinity Stones at once gives their user near-limitless power, Tony could have used the stones to set right every timeline established in Endgame. As the theory (which can be viewed in full below) points out, Tony would have been thinking most of his daughter, Morgan, and working to ensure no lasting paradoxes would result from his bold time heist.

That said there’s no telling how much Tony knew about Loki’s theft of the Tesseract during said time heist. Fans will remember he’d taken a pretty hard hit from the 2012-era Hulk just moments prior to Loki’s escape. So it’s possible fixing that particular mistake could have slipped Tony’s mind — especially since he and Steve found another way to secure the Tesseract.

The Inverse Analysis — There’s no avoiding that the simplicity of the solution laid out above might come as a disappointment to Marvel fans out there hoping for a more complicated explanation for Endgame’s unresolved time-travel threads.

That said, it’s reasonable to speculate that Tony Stark could have used the Infinity Stones to do more than wipe out Thanos in the finale of Avengers: Endgame. With such power at his fingertips, moving to bring timelines back into alignment would be in keeping with the character’s intellect. (It also offers Marvel an easy way to clear its narrative slate before Phase 4 of the Marvel Cinematic Universe.)