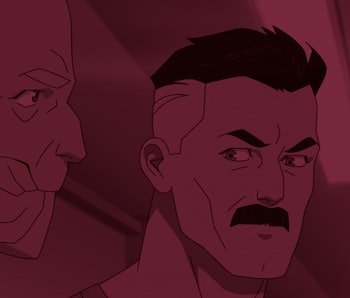 Amazon's animated series Invincible is already one of the darkest superhero shows around, but a preview of Episode 6 reveals how it gets even darker.

Omni-Man: Did Darkblood crack yet?

Cecil: You know him, he barely talks when he wants to.

Omni-Man: Let me stake a swing. I’ll make him talk.

Cecil: As fascinating as it would be to see an unmovable force meet an unmovable object, I prefer to keep these things in-house.

Seems like a pretty straightforward conversation, but there’s one problem. In Invincible Episode 5, Cecil and his colleagues used some sort of demonic spell to banish Darkblood to hell because he was asking too many questions. Apparently, Omni-Man still thinks the detective is walking the Earth, and Cecil has no issue keeping the truth to himself.

This isn’t out of character for Cecil, whose entire thing is being a shady government operative. He’s also highly suspicious of Omni-Man, who was the only survivor of an attack that wiped out the Guardians of the Globe (basically Invincible’s Avengers). As the audience, we already know Omni-Man was the one who killed them, though we don’t know why.

Starting to get confused? Us too. Behind its technicolor animation, Invincible is quickly becoming one of the twistiest superhero stories around. With Episode 6, you can add one more secret to the already heaping pile — and it probably won’t be the last.

Invincible is streaming on Amazon Prime.