“It's hard to deliver a jaw-dropping amazing twist every week.” 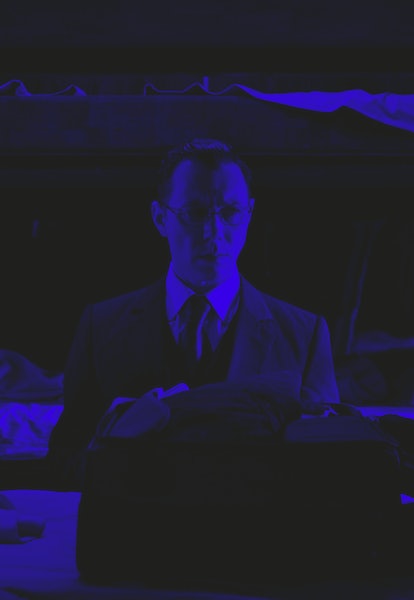 The best shows come from the harshest rules.

Usually, these “rules” are part of the show’s structure. Every episode of How I Met Your Mother is part of some future anecdote given by the protagonist. 24 is bound to real-time storytelling. But in the case of Inside No. 9, a cult favorite British anthology series now streaming on British import streaming service BritBox, the rule is simple: every episode takes place in a “Number Nine” be it a house, a hotel floor, or a train car.

So it may come as a surprise that, according to co-creator Reece Shearsmith, the show’s calling card is actually one of the last things considered in writing.

“People often stop me and say, ‘I've got one for you, do a number nine bus.’ But what's the story? The number nine is the easy part, but the story is everything.” Shearsmith tells Inverse.

If anything, the rules of Inside No. 9 have become a nuisance six seasons on, and not just because people keep telling him to set his show on public transportation.

“It often does become annoying, we're hobbled by this overarching idea that we'll always stay quite claustrophobic,” Shearsmith says. “Episodes have moved around rooms in a house sometimes, and that felt luxurious. Other times we've been completely trapped in a tiny room or a wardrobe.”

“The number nine is the easy part, but the story is everything”

That “wardrobe” episode is the show’s pilot, entitled “Sardines,” which depicts a group of acquaintances getting to know each other far more than they’d like over a game of Sardines at an engagement party. It’s the perfect summation of what this increasingly difficult to explain show can be.

“Sardines began as a very simple idea: a very light story, a comedy of manners. We thought it would be fun to have this game where we knew that you could just introduce a new character every two minutes.” Shearsmith says.

But something was missing from the script.

“It didn't quite catch fire dramatically until we injected something else that's driving the engine underneath,” Shearsmith continues. “So we thought of this thing of this terrible past of this one particular man. And it was with only very small tweaks in the script that it was suddenly there.”

Those small tweaks added a simple scene to the end of the episode. Once everyone is crammed in the wardrobe, a hand is seen turning the key and locking them in. As those inside realize the consequences of their actions, the most unassuming character is shown dousing the wardrobe with lighter fluid. The credits roll as ignites a lighter.

“We were going to do a musical”

These twists became No. 9’s calling card. Sometimes, it’s just a cruelly ironic moment. Occasionally, it’s an epilogue that shows the villain getting their just desserts. Often, it’s a twist that changes everything we’ve learned about the characters over the past half-hour.

“It's hard to deliver a jaw-dropping amazing twist every week that turns everything on its head,” Shearsmith says. “It’s become a tyranny, the idea of the twist.”

Tyranny or not, you can expect to see something unexpected at the end of every episode, even if it’s confirmation of the supernatural or sci-fi vibes rippling through an episode. Then, there’s stories like “Sardines,” where the twist changes the way you see every character and immediately makes you scramble to rewatch and pick up on clues you missed.

Every episode of Inside No. 9 has a Twilight Zone feel where anything seems possible. Yes, sometimes the stories are terrestrial, but other times it’s revealed a character is secretly a vampire, or a prank séance has real ghostly appearances. Even if an episode doesn’t directly have a science-fiction slant, it’s always a looming possibility that makes you suspect everything and everyone.

In case the restrictive setting and obligatory twist weren’t enough of a challenge, Shearsmith and his co-creator, Steve Pemberton, go out of their way to find new ways to tell a story. In the series’ second-ever episode, “A Quiet Night In,” the two play art thieves who attempt, hilariously, to steal a priceless painting from an ultra-posh house without alerting the owner. The episode is an homage to silent films, relying on nonverbal communication and physical humor, a masterclass in careful exposition and simple comedy.

Over the course of six seasons, these ideas get more and more ambitious. After episodes shown through security cameras, as a director’s commentary, and even a live episode that “goes horribly wrong,” Shearsmith and Pemberton outdid themselves with “Zanzibar,” a love letter to Shakespearean comedy told entirely in iambic pentameter and using all the classic comedy-of-errors tropes.

“It’s become a tyranny, the idea of the twist.”

“The idea behind Zanzibar began as just, Let’s do a farce episode, but just the comings and goings in the corridor,” Shearsmith says. “We thought that's great, but the tropes and the stories were a little bit obvious and almost classic. And we thought the way to unlock being allowed to do this is if it's Shakespearian. Sometimes the constraints and the form are enjoyable to really lay on thick.”

In the series’ latest season, “Wuthering Heist” follows along in this grand tradition, combining the genres of heist movies and the Renaissance art of Commedia Dell’Arte, which both involve masks. The fourth-wall-breaking character Columbina references the inherent pretentiousness of the combo, saying it “sounds like something a drama teacher would have a wank to. But hey, it’s series six, you’ve got to allow for a certain artistic exhaustion.”

But if there’s artistic exhaustion, it’s not evident yet. Shearsmith teases an equally ambitious episode that never made it to the final line-up, but not because it wasn’t good enough.

“We were going to do a musical,” he says. “We had a whole one written and were told, ‘It's going to be so expensive to record your voices and then do the click track and the singing.’ And so it just became impossible to do it in the time we had. We might try and go back to doing that.”

In Season 6, the most fascinating episode is “Simon Says,” which is best summed up as, What if a Game of Thrones fan blackmailed George R. R. Martin into writing a better final season? The episode speaks to both toxic fan culture and the complex relationship between creator and fan. It’s also a bit of meta-commentary on the show itself.

“I know what it's like to watch something and think, I wish they'd stop now because I feel like it’s not as good as it used to be,” Shearsmith says. “We would hate to feel that it's a shadow of its former self, so we're very aware of trying to keep the quality good and keep the stories up.”

Now in its sixth season, Inside No. 9 continues to exceed its own extremely high standards, with Shearsmith and Pemberton leading a rotating cast of legendary British actors, from Gemma Whelan (Game of Thrones’ Yara Greyjoy) to Fionn Whitehead (star of Black Mirror: Bandersnatch) and Fiona Shaw (Harry Potter’s Aunt Petunia.)

It’s a sleeper cult hit that constantly jumps from theatrical, to supernatural, to comedic, and back again, and there’s no better time to step into number nine. You never know what you’ll find, but it definitely won’t be what you expect.

The first steps Inside No. 9

If you’re a newcomer to No. 9, it can be difficult to know where to start. After all, it’s an anthology show, so there’s no set continuity. At our request, Shearsmith picks out his essential four episodes for new fans eager to dive in:

Season 1, Episode 1, “Sardines” — “‘Sardines’ is a great one because it's very ‘single act play’ and dark and funny and very ensemble.”

Season 4, Episode 2, “Bernie Clifton's Dressing Room” — “It’s just Steve and I. We did that because we'd never, up until that point, done one that was just us two. So we wanted to do one that was just about us responding and acting with each other.”

All six seasons of Inside No. 9 are now streaming on BritBox.