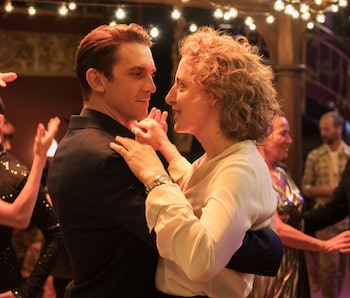 Watching Maria Schrader’s I’m Your Man for the first time, I found myself struck by just how sad I felt.

On paper, that’s an odd thing to say about I’m Your Man, which follows the awkward and turbulent relationship that develops between a woman and her android companion. The film has all the ingredients and trappings of a contemporary sci-fi romance, with dashes of farcical humor scattered throughout that accentuate its rom-com sensibilities.

And yet, while I watched the film’s two leads lie in a meadow together reminiscing about a meet-cute that never happened, I became overwhelmed by a sense of loneliness. The film’s second half only further crystallized that feeling, as I watched director Maria Schrader use her idiosyncratic central pair to explore the frustratingly unremarkable agony of loneliness, as well as society’s surprising need for it.

I’m Your Man is one of the most strangely charming and beguiling films of the year, and perhaps the single loneliest romance movie we’ve seen since Spike Jonze’s Her.

A woman walks into a bar and finds a man waiting for her at a nearby table. He immediately flatters her with comments while she quizzes him with lines from famous poems and complex math equations. Moments later, while they’re twirling together on the bar’s dance floor, his head begins to twitch involuntarily, and his words repeat in an endless, broken loop. His handlers quickly arrive to lift and escort him out of the room.

The man, Tom (Dan Stevens), is an android companion designed specifically for the woman, Alma (Maren Eggert), whose task is to observe him for three weeks to determine if Tom and the rest of his kind should be made available to the public. Their meeting at the bar, in other words, is merely the first step in an experiment that has the potential to reshape the entire world.

And as an introduction to the film’s sci-fi premise, Alma and Tom’s glitchy first date not only does a lot to set up I’m Your Man’s story but also to put us in the same reticent, disoriented headspace as Alma. It’s a state she spends much of the film occupying, as the disconnect she feels towards the world around her eventually gives way to a longing for honest, fulfilling human connection.

Coming off her work on the acclaimed Netflix mini-series, Unorthodox, Schrader brings a steady, unintrusive hand to I’m Your Man. The film maintains a sense of intimacy between the viewer and Eggert’s Alma that would have been difficult to achieve had the director opted for a more overly stylized approach. Her decision to keep things fairly simple visually, in turn, makes the select few moments when she changes things up land that more efficiently. For example, when she uses handheld POV shots during Tom and Alma’s awkward first dance, the filmmaker helps communicate her protagonist’s growing confusion and disorientation.

Schrader’s commitment to the film’s subtle visual style only leaves more room open for I’m Your Man’s two leads to shine. And shine, they do.

For her part, Eggert brings a wounded longing to Alma that only grows more transparent and more palpable the more time we spend with her. Ultimately, however, it’s Dan Stevens who makes the biggest impression in I’m Your Man. The actor, who has emerged as one of the most exciting and compelling screen actors working today, uses every tool he has to bring Tom to life.

Physically, Stevens moves in a stilted, robotic manner — achieving an awkward grace that makes Tom’s artificial nature constantly, unavoidably clear. Where most actors might have tried to make Tom appear as human as possible, Stevens does the opposite, and in doing so, he gives the character an innocent obliviousness that makes it easy to fall in love with him. His constantly wide open, piercing blue eyes only further help in that regard, making Tom’s curiosity and desire to connect with Alma apparent in every frame he’s in.

Unfortunately, the film’s script fails to be as consistently engaging as its lead performers, particularly its uneven second act. I’m Your Man’s closing third does a lot to help bring everything together again, though, as Alma’s innermost pain is laid bare and her battle with loneliness reaches its inevitable conclusion. While the film’s final act may not be all that revolutionary or surprising either, the sincerity and thoughtfulness with which Schrader communicates it is nonetheless commendable and moving.

Unlike many of the other human-AI romances we’ve seen in recent years (ex. Her, Blade Runner 2049), I’m Your Man isn’t interested in the power of connection so much as the role loneliness serves in motivating us to search for it in the first place. It’s a refreshing thematic spin on somewhat familiar material, one that acknowledges both the pain and importance of loneliness.

After all, what is it that drives us to connect with each other, if not a desire to escape our feelings of isolation? In that way, maybe it’s our loneliness, Schrader argues in I’m Your Man, that, paradoxically, keeps us together.

And like waiting, eyes closed and hopeful, for the one you love to lean down and kiss you, the search for human connection is a risk that may very well never pay off for some of us, but that doesn’t mean we should open our eyes.