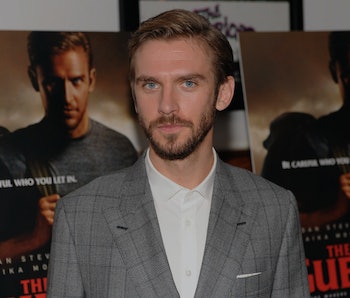 Naming a new actor as James Bond is a rite of passage that comes along only once in a decade or so. The current Bond, Daniel Craig, accepted the coveted role of Ian Fleming’s debonair spy at a time when the filmmakers were overhauling the 50-year-old franchise. Gone were cheesy gadgets, winking nods, and eye roll-worthy puns. Casino Royale and Craig revamped the smooth Bond into a violent bruiser with a legitimate license to kill. Three more films and billions of dollars later, it looks like Craig is giving up the shaken vodka martinis and Aston Martins, raising the obvious one question. Who should be the next 007? We say Stevens. Dan Stevens.

It’s an appropriate time to reboot the reboot. Spectre returns Bond to the cheeky spy gimmicks that Craig’s tenure seemed ordained to write off 10 years ago, and Craig doesn’t seem too keen on returning again. When asked if he was up for another go as 007, he told Time, “At this moment, no. I have a life and I’ve got to get on with it a bit.” Not the most ringing endorsement for Bond fans, but then, fans were clucking over who should be the next Bond moments after Craig was announced as the character in 2005. He got the reputation for being “James Bland” before he even appeared onscreen, and an unofficial website called DanielCraigIsNotBond.com is maintained to this day.

With Craig out, people are floating names like Tom Hardy and Damian Lewis. Hardy is far too much of a bruiser — even more so than Craig — to fit in the role. Would Bane really be all that believable as a British superspy? Lewis is an even more perplexing choice, mostly because he’s the most boring possibility, but also because he’s already too far into his 40s to realistically take over the role. If he went by a tenure similar to Craig’s decade-long stint then we’d have a 54-year-old criss-crossing the globe for espionage and casual spy-sex. The last thing the franchise needs is a [Roger Moore-type situation](http://jamesbond.wikia.com/wiki/JamesBond(Roger_Moore) in which the actor playing Bond is older than the love interest’s mother.

Idris Elba is perhaps the most intriguing choice to be the next man up — to its lasting credit, the very idea has already pissed off reactionaries and racists. But in a franchise normally unwilling to try new things, it seems doubly unlikely for Elba to become the new Bond. He’s older even than Lewis; at 43 now, Elba would be fully 15 years older at the time of the next Bond movie’s release than OG Bond Sean Connery was when Dr No premiered.

Then there’s Stevens. You may remember the still fresh-faced actor from his three seasons on PBS’ stuff-shirt drama Downton Abbey. He played the doughy, repressed lawyer Matthew Crawley, who, through Britain’s antiquated familial lineage, suddenly became the refined aristocratic heir to the titular estate before (spoiler alert) dying tragically after accepting his newfound place among the British gentry.

His exit caused a stir among fans, but, like Craig exiting Bond, Stevens wanted to move on to different acting opportunities onscreen and off. Though he’s appeared in stage plays and in movie parts here and there, nothing has been more high-profile for Stevens since his Downton exit. Yet the best and most unorthodox role he’s taken since then is in director Adam Wingard’s unfortunately little-seen campy horror-thriller The Guest. And it proves why he can and should be the next Bond.

His turn as a (spoiler alert) jacked-up Manchurian Candidate-esque soldier whose programmed special ops training is turned on after he shacks up with the family of a fallen war comrade was Stevens beyond Downton. Here, his former soldier character David Collins was sexy, suave, threatening, powerful. He was for all intents and purposes the bad guy, but it’s an electric performance that not many people know about, and one that isn’t too far off from the types of traits inherent in the James Bond character.

A suave ass-kicking soldier crossed with an English burgher? Sounds like a successor to Craig. Too young, you say? He’d still be older than the 30-year old George Lazenby was when he took over the role for On Her Majesty’s Secret Service. But is he too unconventional against Fleming’s original version of Bond? Well, so was Craig when he was cast, and let’s not forget Fleming’s original description of Bond included details glossed over in the movies like a three-inch scar on his right cheek.

At this point, James Bond is a symbol, and he can be anyone the filmmakers want him to be. This is the genius of Bond, which can be perpetually changed to meet the needs of the contemporary cultural landscape. The fresh take on the character we need now lies in Stevens, the type of young actor whose star can rise with his talent by giving him a shot like this.