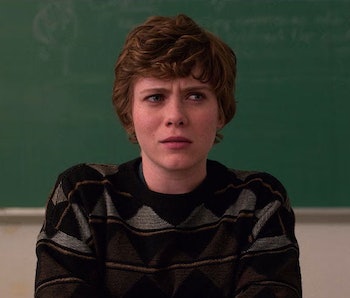 This article about Season 2 of the comedy I Am Not Okay With This was originally published on March 4, 2020 and updated on July 23, 2021 following the cancellation of the series. Read on for the original article, with some new changes to reflect the latest updates on this topic.

Starring IT cast alums Sophia Lillis and Wyatt Oleff, I Am Not Okay With This, became Netflix's latest hit shortly after its Netflix premiere on February 26, 2020. But with just a handful of short episodes, you've probably already binged through the entire first season. So what's the deal with I Am Not Okay With This Season 2?

The series from the producers of Stranger Things and the creator of Netflix's The End of the F***ing World is based on a graphic novel by Charles Forsman (who also wrote F***king World). It stars Lillis as Sydney Novak, a jaded high school sophomore living in a small Pennsylvania town. Still dealing with the emotional impact of her father's death, her best friend drifting away from her, and a possible new love interest, Sydney's world is turned upside down when she realizes objects can move when she's feeling overwhelmingly stressed or angry.

It's not just puberty. Sydney got superpowers.

Unfortunately, we won’t be watching the adventures of Sydney any longer, as I Am Not Okay With This was canceled after one season. Here’s everything we know about that.

Has I Am Not Okay With This been renewed for Season 2?

I Am Not Okay With This will not return for Season 2. Initially, the series was renewed in summer 2020. But only a couple of months later, Netflix announced it would be canceling Season 2 of the show.

Why was I Am Not Okay with This canceled by Netflix?

According to our interview with I Am Not Okay With This producer Shawn Levy, Netflix has a unique metric to help gauge which shows are worth renewing for another season: completion rates.

"Eyeballs count to Netflix, but what really counts tremendously alongside tonnage is completion," Levy told Inverse back in February. "They really measure the success of a show or a movie based on that completion ratio. What is the ratio of people who start your story and finish it versus the number of people who start it but jettison out after just a few episodes?"

But when it came to I Am Not Okay With This, one big factor came into play besides viewing figures: COVID-19. Netflix said it canceled the show due to complications filming in the pandemic. Unfortunately, the streaming service took priority in shooting some shows above others, and I Am Not Okay With This was sacrificed.

What would the plot of I Am Not Okay With This Season 2 have been?

Obviously none of these questions will be answered, but there were several mysteries left unsolved by the end of I Am Not Okay With This:

Who is following Sydney?

Halfway through Season 1, we see that a shadowy figure is following Sydney around town as her powers begin to really take hold and do serious damage. This unknown character seems to have the ability to disappear into dust at will, similar to Thanos snapping someone out of existence, which indicates Sydney and this person have a common bond. This person reveals themselves to Sydney at the end of the season and tells her that her training is about to begin.

What's going to happen to Sydney after she killed Brad at homecoming?

The Season 1 finale of I Am Not Okay With This was pretty bananas. After numerous teases of the coming gorefest sprinkled throughout the season, which mostly saw Sydney covered in blood and running away from the cops, we finally saw how she ended up that way. Sydney's relationship with Brad went from bad to worse when she found out during their group detention that he had cheated on Dina, Sydney's best friend. In retaliation, Brad gets his hands on Sydney's diary where she opens up about her personal struggles and her developing superpowers. Brad attempted to humiliate Sydney during homecoming, revealing to the entire school her feelings for Dina and her grief over her father's death. This sends her into a quiet rage and, as we've seen before, leads to her powers coming out in full force. Except, this time, she causes Brad's head to explode before he can reveal her biggest secret. Killing Brad in a room full of people is going to be the talk of Sydney's small town and explanations will need to be devised in order to make sense of it. Will Sydney be exposed? Or will she be able to get away with her role in his death?

Will Sydney have to tell Dina about her powers post-Brad?

Sydney and Dina's relationship is already pretty complicated at the end of Season 1. These two have been friends for years but struggled to stay close once Dina started dating Brad. After Sydney kissed Dina at a party, things got even more awkward but these two have really tried to work things out. At homecoming, it seemed like Dina was maybe on board with kissing Sydney and there could be room to turn their friendship into a relationship. However, that could all change if — and probably when — Sydney tells Dina about her superpowers and the dots get connected back to Sydney's role in exploding the head of Dina's cheating ex.

The existence of Sydney and that shadowy figure imply there are others like them out in the world. What we don't know yet is whether these superpowers are relegated solely to the Novak family tree or if this is some bigger, X-Men-level evolutionary next step with tons of folks around the world coming into their own as superheroes.

I Am Not Okay With This Season 1 is currently available to stream on Netflix.

More like this
Entertainment
5.15.2022 11:30 AM
You need to watch the most underrated superhero franchise before it leaves Netflix this month
By Dais Johnston
Entertainment
5 hours ago
She-Hulk release date, cast, plot, and trailer for Marvel’s Disney Plus show
By Mae Abdulbaki and Mike Bloom
Entertainment
17 hours ago
Do we really need Black Mirror Season 6? Why the Netflix series has lost its edge
By Dais Johnston