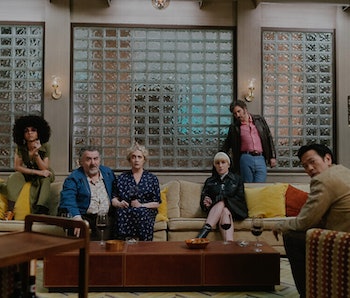 A little over a decade ago, two types of monsters were unseen on television: Nazis and zombies. What a difference ten years makes. The Walking Dead proved there's plenty of TV money to be made in bringing the undead to life. And now, with Hunters, Amazon's new Grindhouse series about a gang of Jewish vigilantes taking out Nazis in 1970s America, a similar programming plan is beginning to take shape.

Hunters stars Al Pacino and Logan Lerman as Holocaust survivor and Nazi-hunter Meyer Offerman and Jonah Heidelbaum, his young protege. Along with the rest of Meyer's rag-tag team, they track and eliminate the threat of the resurgent Third Reich in the United States.

The 10-episode first season, which is now streaming on Amazon, will surely leave a mark in the streamer's growing Jewish-themed entertainment presence. With the huge success of The Marvelous Mrs. Maisel and the cult following of The Man in the High Castle, one has to wonder if Season 2 (and beyond) are in Hunters’ future. And if you ask series creator David Weil, the answer is an emphatic yes.

"Oh my god, I have five seasons mapped out if I'm lucky enough to get a second season," Weil tells Inverse. "There are so many stories to tell. I'm dying to tell them. And I'm ready."

“I have five seasons mapped out.”

What stories is he referring to, exactly? For Weil, Hunters has always been a personal homage to his Jewish upbringing, the love he has for his grandmother, and Jewish culture itself. But the narrative responsibilities extend beyond his formative years and into the real-life, utterly-horrifying experiences that survivors of the Holocaust have lived to tell.

The Amazon series takes place in 1977 New York, which is just a bit over 30 years since Hitler's reign ended, but also features regular flashbacks to the concentration camps where Nazis killed and tortured Jews by the millions. And yet, there's a disconnect between the two eras in which the show transpires. Even in the ‘70s — let alone the year 2020 — people tend to forget the gruesom reality of the Holocaust. Hunters is here to remind us.

"I think that that's the biggest thing," executive producer Nikki Toscana tells Inverse. "I look at my son's generation. He's 15 and he knows what the Holocaust is, but he doesn't know the details and the true horrors of what it was like living in Auschwitz. I think one of the biggest reasons to be telling this story is because the last generation of survivors is dying out. We need to be able to understand the past in order to be able to change the present."

As for the different Holocaust stories being told in the series, Weil is the first to admit that, while he did the research and used many of the facts he found as a basis for what transpires in the series, a lot of the stories the show flashes back to have been heightened and fictionalized.

"Look, they're not all literally true," he says, referencing the chess match scene in the series, which finds prison camp Jews stripped naked and used as literal pawns in a life-sized chess game where lost pieces are killed on sight.

"Am I aware that the Nazis created this human chessboard and chess match? No. But what I do know is that their kind of sadism, gamesmanship, and torture, even if not in a chess match, per se, is incredibly true, representationally, to the kinds of acts of violence and torture that they would impart on their victims."

Why did Weil decide to amplify these horrors for entertainment purposes? For one thing, it's a TV show. It’s entertainment. But, it was also a decision made out of respect.

I didn't want to take an actual person's torture and show it," he says. "I didn't want to borrow from someone's true story in that way. This is not a documentary, it's a dramatic narrative series. Our fictional characters — Meyer, Ruth, Chava — are present in this scene. And so I wanted to depict the kind of trauma that victims experienced in a representationally truthful, factual, symbolic, if not literal, way."Carol Kane, who plays the Holocaust survivor and weapons expert Mindy Markowitz in the series, wants audiences will be entertained by Hunters. But, on a deeper level, she too hopes the series will help educate and remind people that such hateful acts happened and can indeed happen again.

"My mother was telling me the other day that our family lost a bunch of people because they were told to leave, you know?" Kane tells Inverse. "I hope that we're not about to go through that same event in a different manner with what's happening to our government right now, where one person feels the license to do anything he wants to do, where he has a lot of people supporting the fact that he can do anything he wants to do, that's very dangerous. It's important to make the connection between the show and now."

If it takes four more seasons to drive that point home, so be it. At the very least, Hunters Season 2 feels like an absolute necessity.

This article has been updated with additional comments from showrunner David Weil.