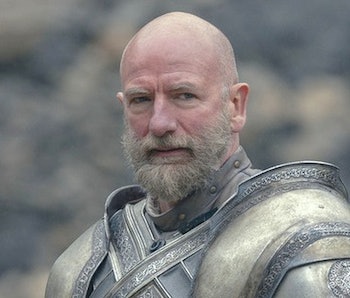 Ser Harrold Westerling is one of the most curious characters in the vast tapestry of House of the Dragon. Unlike the other players, he was mentioned only once in the books, and that was when he passed on two years before the wedding of Rhaenyra and Laenor. In the series, however, he’s the very much alive Lord Commander of the Kingsguard, played by the inimitable Graham McTavish.

So when something unexpected happens, like Harrold’s impromptu resignation in Episode 9, there’s no text to consult. But fear not, for we know the likeliest explanations for his current whereabouts.

After the demise of King Viserys, a shaken Alicent brings her understanding of his last words to the council. To her, it sounds like Viserys wanted their son Aegon to be king, although the audience knows he’s really referring to a much more distant Aegon Targaryen: Jon Snow. But to her surprise, the council, led by Alicent’s father, Otto Hightower, has already prepared for Aegon to ascend the throne.

Ser Harrold is in the locked room where the coup is planned, and he’s not having any of it. When Otto instructs him to take knights to Dragonstone and dispatch Rhaenyra and her family, he instead takes off his white cloak and leaves, saying, “I am Lord Commander of the Kingsguard. I recognize no authority but the King's. And until there is one... I have no place here.”

So if he has no place in King’s Landing, where could he end up? The most obvious option is exactly where Otto Hightower was going to send him: Dragonstone. He could join Rhaenyra and Daemon after Rhaenys warns them the coup is underway. In the sneak peek for Episode 10 we see some Kingsguard members around the Painted Table, although none of them appear to be Westerling.

If he’s not picking Rhaenyra’s side in the upcoming Dance of the Dragons, where else could he go? There’s a place men in Westeros go when they’ve given up on their first career: The Wall. It’s used as a threat in Episode 9 against an outspoken council member, but it’s possible Westerling could end up there out of a sense of duty. As a man of honor, he could find something to defend that will never be undeserving of his loyalty.

Of the two possibilities, the former seems more likely. Unlike the sprawling perspective of Game of Thrones, House of the Dragon has been laser-focused on the Targaryens and their families. The Wall has yet to appear, and it’s unclear how it could be crammed into the upcoming conflict. We can’t rule it out, but we think it’s more likely that Westerling will put his white cloak back on rather than don a black one.

But considering the constant presence Ser Harrold Westerling has had throughout the series, it’s unlikely that this is the last we’ll see of him. He always does the right thing, even if it means his personal station won’t be helped, and that’s a rare attribute in the Game of Thrones universe.

This show needs all the honor and morality it can get, so you can probably trust that Ser Harrold Westerling will be back for more adventures.

House of the Dragon Episode 9 is now streaming on HBO Max.