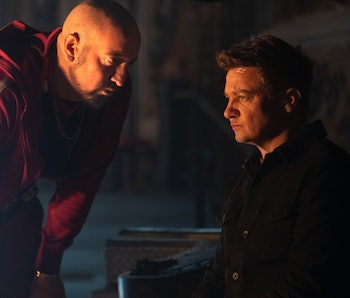 Marvel’s Hawkeye got off to a fun start last week. The show’s first two episodes brought Kate Bishop (Hailee Steinfeld) and Clint Barton (Jeremy Renner) together through some unexpected hijinks involving the latter’s coveted Ronin suit, a quirky mob known as the Tracksuit Mafia, and a mysterious Black Market auction.

Everything culminated with Clint and Kate falling (literally) into the hands of the Tracksuit Mafia and their “manager,” Maya Lopez (Alaqua Cox). It was an exciting endpoint that should lead to some riveting drama and suspense in Hawkeye Episode 3.

With that in mind, here’s everything you need to know about the upcoming Disney+ premiere of Hawkeye Episode 3.

When is the Hawkeye Episode 3 release date?

When is the Hawkeye Episode 3 premiere time?

What is Hawkeye’s release schedule?

After the premiere of Hawkeye’s third episode this week, only three episodes of the show will remain, all of which will be released individually every week.

The Hawkeye Season 1 finale will premiere Wednesday, December 22 on Disney+.

How long is Hawkeye Episode 3?

The runtime for Hawkeye Episode 3 has not yet been officially confirmed. That said, Marvel fans can likely expect it to run somewhere between 50 minutes and an hour in length, with the show’s first two installments clocking in at 50 and 52 minutes, respectively.

What is the plot of Hawkeye Episode 3?

No official plot synopsis has been released for Hawkeye Episode 3. That said, the cliffhanger ending of the show’s second episode suggests, at the very least, Hawkeye Episode 3 will begin with Clint and Kate officially meeting Alaqua Cox’s Maya Lopez and hopefully learning some more about the Black Market mystery at the center of the show.

Whether or not the episode will also spend some more time with Kate’s shady soon-to-be stepfather, Jack Duquesne (Tony Dalton), and her mother, Eleanor (Vera Farmiga), is a little harder to predict right now.

Where can I watch Hawkeye Episode 3?

Only paid Disney+ subscribers can stream all six episodes of Hawkeye, as the series is one of the streamer’s exclusive titles.

Is there a trailer for Hawkeye Episode 3?

Marvel and Disney don’t generally release episodic teasers for their original series, so no trailer specifically for Hawkeye Episode 3 has been released yet. Fortunately, previous Hawkeye trailers do feature plenty of footage and scenes that weren’t included in the first two episodes.

The teaser and featurette included below even show some upcoming moments from the confrontation between Clint, Kate, Maya Lopez (Alaqua Cox), and the Tracksuit Mafia that we saw at the end of Hawkeye Episode 2. Therefore, feel free to check out the teasers for yourself while waiting for Hawkeye Episode 3 to drop on Disney+ this Wednesday.