Eye for an Eye 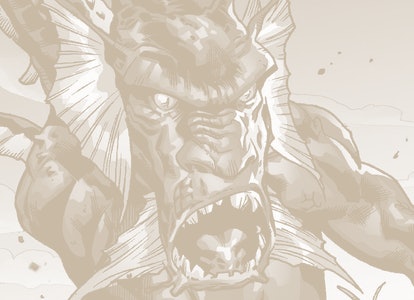 Hawkeye Episode 3 doesn’t begin the way most Marvel fans might expect. Instead of picking up where the show’s second episode left off — with Clint (Jeremy Renner) and Kate (Hailee Steinfeld) in the hands of the Tracksuit Mafia — Hawkeye’s third installment starts with a series of flashbacks.

The opening sequence follows Maya Lopez (Alaqua Cox) as she grows up under the watchful, caring eye of her father William (Zahn McClarnon), and ends with his demise at the hands of Ronin (aka, Clint). It’s an effective and emotionally potent prologue — one that reveals Maya’s past and sets up her to be a major antagonistic force throughout the rest of Hawkeye.

However, the opening minutes of Hawkeye Episode 3 also feature a subtle reference to Shang-Chi and the Legend of the Ten Rings that may be more important than you think.

Dragons in the MCU

One of the first scenes in Hawkeye Episode 3 sees Maya and her father having a playful but heartfelt conversation about her place in the world. At one point, Maya asks her father if dragons are real, to which he responds, “Maybe they are, but dragons live in a different world.”

On its own, the moment doesn’t seem to carry much significance. But coming off of the September release of Shang-Chi, which introduced viewers to the Marvel Cinematic Universe’s first dragon, it raises some interesting questions about the future of the MCU.

Specifically, is it possible that William’s comment is confirmation that Marvel does, indeed, plan on taking viewers to Kakaranthara?

In the comics, the Mandarin’s Ten Rings are pieces of technology created by an alien, shape-shifting race called Makluans. They hail from a planet named Kakaranthara and look a whole lot like dragons. Ever since Shang-Chi’s release, Marvel fans have been speculating that both the Makluan race and their home planet will be introduced on-screen sometime in the near future.

That’s largely thanks to Shang-Chi’s first post-credits scene, which sees its hero (Simu Liu) and his best friend Katy (Awkwafina) meet with Wong (Benedict Wong), Carol Danvers (Brie Larson), and Bruce Banner (Mark Ruffalo) to discuss his Ten Rings. The scene reveals that no one — not even Carol or Bruce — has been able to determine where the Rings hail from or what kind of technology they’re made of. All they know is that the Rings have been emitting a signal ever since they came into Shang-Chi’s possession.

While it’s possible Marvel could choose to take this mystery in a dozen different directions, many believe it’ll eventually be revealed the Ten Rings were created by the Makluans on Kakaranthara — just like in the comics. The presence of a dragon known as the Great Protector in Shang-Chi’s third act has only made certain Marvel fans that much more convinced about the validity of this theory.

Taking all that into account, it’s not hard to imagine the possibility that William Lopez’s remark in Hawkeye Episode 3 about dragons living “in a different world” is both a subtle nod to the events of Shang-Chi and a sly bit of foreshadowing of what’s to come — namely, the introduction of the Makluans and Kakaranthara in the MCU.

The Inverse Analysis — As always, it’s entirely possible that this Hawkeye moment has nothing to do with either Shang-Chi or Marvel’s rumored dragon plans. That said, the fact that the Disney+ show features a conversation about the existence of dragons so close to the first appearance of one in the MCU feels a bit too well-timed to be nothing more than a coincidence.