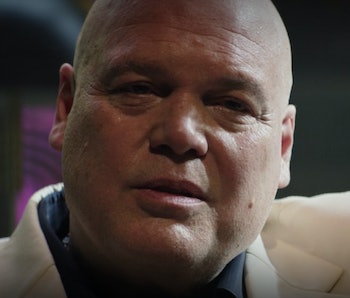 2021 saw Marvel Studios bring back two characters from its short-lived Netflix originals. Charlie Cox made his return as Matt Murdock, a.k.a. Daredevil, in Spider-Man: No Way Home, while Vincent D’Onofrio reprised his role as Wilson Fisk’s Kingpin in Episode 6 of Hawkeye. Unsurprisingly, both Cox and D’Onofrio’s returns were received positively by Marvel fans.

However, the actors’ appearances also raised questions about which versions of Matt Murdock and Wilson Fisk they’re playing now. Are Cox and D’Onofrio once again playing the same iterations of their Daredevil characters, or new variants of them?

Marvel, predictably, has yet to officially reveal the answer, but one deleted scene from Hawkeye may offer some insight into the MCU’s version of Wilson Fisk.

Wilson Fisk in the MCU — This week, Twitter user @Zeus_TheAlpha shared a deleted scene from Hawkeye Season 1 featuring both Vera Farmiga’s Eleanor Bishop and D’Onofrio’s Kingpin. The scene seems to take place sometime after the murder of Derek Bishop (Brian d'Arcy James) and depicts the beginning of Eleanor and Wilson’s secret partnership.

More importantly, D’Onofrio wears the same kind of all-black suit that he often wore in Daredevil. The sequence’s darker, warmer color palette also makes it more visually reminiscent of Daredevil than practically any other scene in Hawkeye, which may be why it was ultimately cut from the Disney+ series.

Taking all this into account, the scene seems to suggest that the version of Fisk viewers see in Hawkeye is indeed the same one D’Onofrio played in Daredevil.

The King’s Return — When Fisk shows up in Hawkeye Episode 6, he’s a little bit different from how Daredevil fans remember him.

While the character talks and acts the same way he did in the Netflix series, he also wears lighter and more colorful clothing than he did in Daredevil. Additionally, his fight with Kate Bishop (Hailee Steinfeld) depicts him as being even more physically powerful and resistant to damage than he was ever shown to be in Daredevil.

As a result, Marvel fans began to wonder if the Fisk featured in Hawkeye is a variant of the version seen in Daredevil, who may now exist in a different reality than the MCU. D’Onofrio, however, has said that Hawkeye’s Kingpin is the same one from Daredevil, and this deleted scene seems to prove that.

The Inverse Analysis — At the very least, this deleted scene confirms that Hawkeye’s version of D’Onofrio’s Kingpin has much more in common with the Daredevil iteration than fans were led to believe by the Disney+ show’s finale. And it seems likely that the MCU’s Fisk isn’t a variant of the Daredevil one, just a slightly different interpretation of him.

But we won’t actually know for sure what the deal really is with D’Onofrio’s Kingpin until Marvel confirms what Daredevil’s connection to the MCU really is.