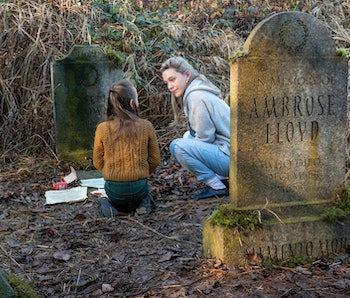 The Haunting of Bly Manor has a lot of death. That’s par for the course in any ghost story, though the new Netflix series keeps many of its deaths awfully ambiguous. In the first episode, we learn that Flora and Miles need a live-in au pair at Bly Manor because their parents, Charlotte and Dominic Wingrave, died a couple of years prior. Their uncle Henry was left to care for them, but chose to stay behind in London. While the reasons for their excursion abroad are revealed over the course of the series, the details surrounding their deaths remains a mystery still waiting to be uncovered.

Spoilers ahead for The Haunting of Bly Manor.

In the sixth episode, “The Jolly Corner,” flashbacks reveal Charlotte and Henry were having an affair while Dominic was traveling for work. The pair kept their entanglement a secret for years, until Dominic spots his wife and brother quietly attempting to cover up their adoration for the other in public. Dominic later discovers that Flora isn’t even his daughter and that Charlotte had lied about her being born early to cover up the affair. Dun dun dun.

It was a plot twist that escalated the tension and explained why Henry never went back to Bly Manor. It was in the aftermath of Dominic’s revelations that he and Charlotte thought to repair their marriage. They decided to take a trip to India, retracing the steps of their honeymoon in an attempt to rekindle what they’d lost. Suffice it to say that they never made it back to England and a phone call to Henry confirmed that they had been in some sort of accident.

However, death by accident is a rather vague descriptor and could mean a myriad of things. Was it a car accident? Were they mauled by an animal? Did they accidentally drown? It’s all unclear, perhaps purposefully so. That way, the focus is less on the deaths that occurred outside of Bly’s parameters. The only thing we know for sure is that they weren’t killed by any of the ghosts at the manor and they're certainly not hanging around in the afterlife, at least according to Flora.

Henry James’ A Turn of the Screw, the literary basis for the Netflix series, holds even less information about their mysterious deaths. In fact, Charlotte and Dominic aren’t even given names and are referred to only once in the early pages of the novel when explaining Henry’s predicament.

“He had been left, by the death of their parents in India, guardian to a small nephew and a small niece, children of a younger, a military brother, whom he had lost two years before.”

As tragic as the deaths of Charlotte and Dominic may be, their passing is detached from the firm grip of Viola Willoughby and the ghosts that haunt the estate. Instead of fading away, their memories will simply live on the hearts and minds of Flora and Miles. That, by comparison, is a nicer fate than most.

The Haunting of Bly Manor is currently streaming on Netflix.