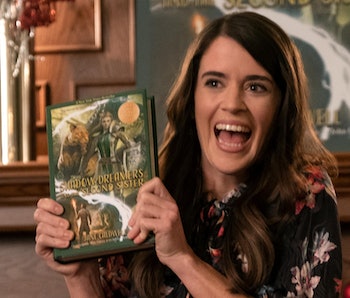 Thanksgiving weekend is usually big for movie releases. This year, that wasn't so true. However, Hulu did gift us with Clea DuVall's much-anticipated LGBT+ romantic comedy: Happiest Season.

Happiest Season is a totally passable Christmas movie filled with holiday cheer and romantic tension, but the standout performance comes from Jane Caldwell (the disrespected third sister played by co-screenwriter Mary Holland). While her siblings vie for parental approval, Jane provides comedic relief, often by describing her unpublished fantasy novel with other party guests who seem enraptured by the nerdy nonsense coming out of Holland's mouth.

But is Jane's book actually nonsense, or is there a legit fantasy epic hidden within the Happiest Season? Against our better judgment, we decided to find out. Warning! Spoilers ahead for Happiest Season and also for Shadow Dreamers and the Second Sister.

What begins as a running joke for Jane turns into a success story in the film's epilogue, where she reads from her now-published New York Times Bestseller, Shadow Dreamers and the Second Sister in front of a crowd of dozens of fans eager to get her signature. We only hear the last few lines from the reading, but it sounds straight out of any high fantasy:

"Once they cross Corvall Chasm, they will enter floam territory. The Shadow Dreamers know they might not all make it out with their Krindoll intact, but the entire Thorfian race rests on their shoulders. They look to each other and then into the darkness. It is Glank who takes the first step."

It's... not much to go on without context, but we get more info as she reads this passage. The camera pans up from a display of the book's cover, which depicts a regal-looking elf and what looks to be some sort of laser-eyed leopard.

It's true that you can't judge a book by its cover, but when you're surmising the plot of an in-universe fictional book, you don't really much of a choice. The cover of Shadow Dreamers and the Second Sister has three main elements: a female elf in battle armor, a man holding a torch in front of a cave, and a leopard creature with glowing eyes.

It's probably safe to assume the elf is the titular "Second Sister," but is she also the "Glank" who takes the first step in the excerpt? Either way, she definitely plays a major role in the series. Perhaps the armor she wears is the "Krindoll" that may not make it out intact.

Thankfully, the male figure's role is laid out more clearly in an earlier scene, where Jane says the following about the plot of her book:

"So, Plort is the leader of the Shadow Dreamers. He’s half human, half Quazzle. He’s got the eyes of a Verg but the heart of a Zengle. The Verg comes from his mother’s side, generations back."

So this character is probably Plort, leading the Shadow Dreamers on their quest to save the Thorfian race through some sort of mystical cave or tunnel as pictured on the book's cover.

As for that laser-leopard, it's a bit of a mystery. We were almost ready to give up when we realized another cocktail party conversation holds a clue:

"And then in the third chapter, the Shadow Dreamers discover that the gemstone that they thought was inside the gork was actually stolen by an evil floam, which is sort of like a maggel but with less arms and more powers."

In the movie's official closed captioning, none of these terms are capitalized like in the other quotes. So it's safe to assume these are not beings, but creatures of some sort. The leopard certainly looks evil, so perhaps it's a "floam" — which means a "maggel" looks like a leopard but with more arms and fewer powers?

The three cover elements of Shadow Dreamers and the Second Sister might be explained by clues dropped throughout the movie, but the actual plot of Jane's book is still completely opaque...

Until you remember Jane's final geeky conversation with John (Dan Levy), who seems to be some sort of literary agent and clearly recognizes the genius in her ramblings:

"So, the Shadow Dreamers were compelled to rise up against Flanks... Because of the blatant Thorfian rights violations."

This final puzzle piece brings together what at least resembles a narrative, so here's our best guess at the plot...

Shadow Dreamers and the Second Sister is the story of Glank, a Thorfian lesser princess who calls upon the mystical Shadow Dreamers to help her people rise up against the oppressive Flanks.

Over the course of the book, they seek a gemstone that will grant them the power to defeat the Flanks, but face the terrifying floams (laser-leopards). Glank discovers her own hardiness in battle, allowing her to join the Shadow Dreamers in their next adventure. The end!

It's an absolute stab in the dark, but it sounds like an epic fantasy that would evoke a devoted following like Jane's. And who knows, if Happiest Season gets a sequel, we could see Jane promoting another book in her series, or even supervising a hit HBO or Amazon miniseries based on it. The question is: Who plays live-action Glank?