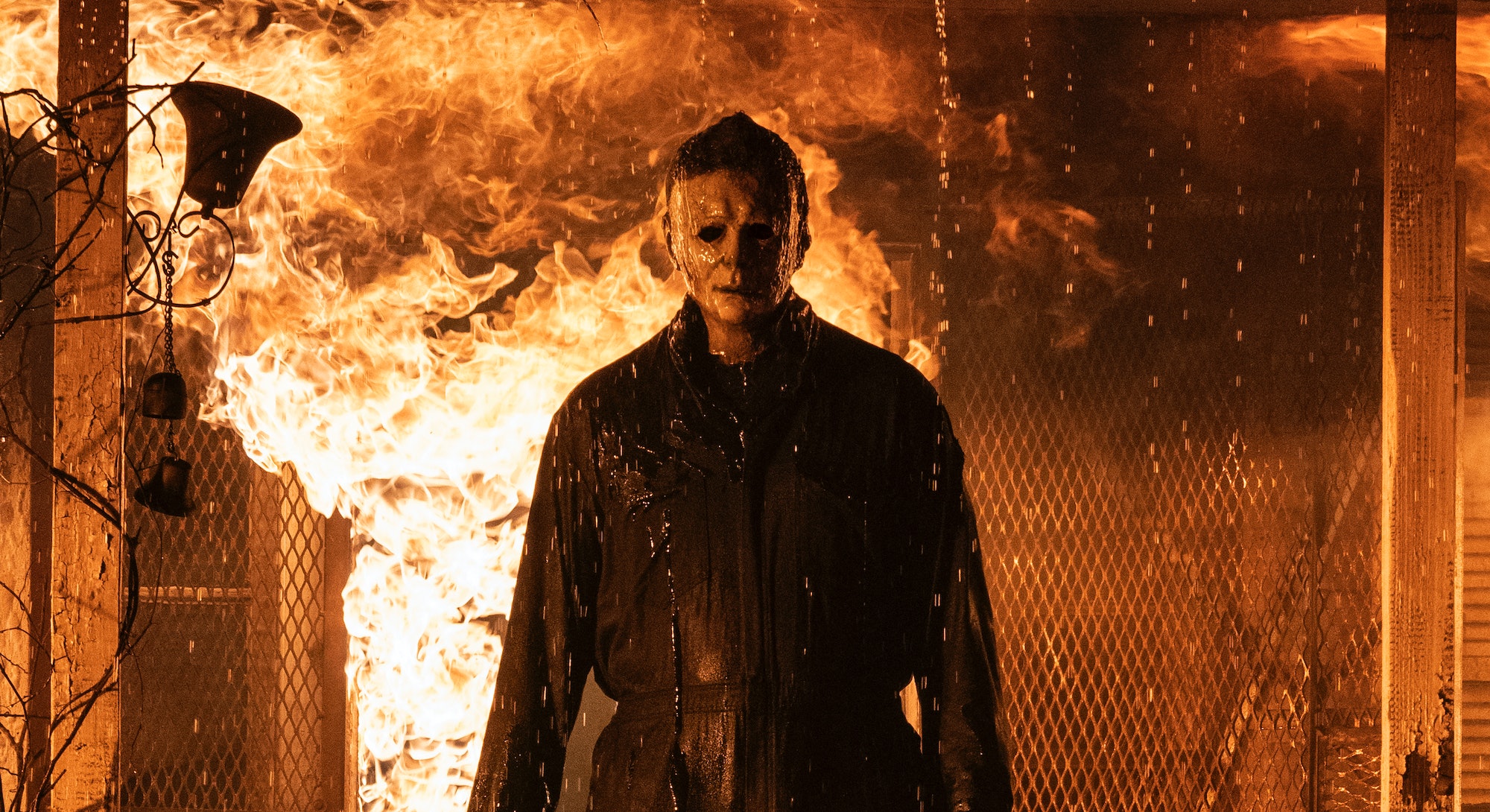 A wounded Laurie Strode, played by a silvered Jamie Lee Curtis, screams over ear-bleeding police and firetruck sirens. Her pleas from the back of a truck are ignored. Her nightmare will never end.

Thus opens Halloween Kills, now in theaters and on Peacock.

From director David Gordon Green — who wrote the script with comedian Danny McBride and Scott Teems — this twelfth entry in the franchise that began with John Carpenter’s Halloween is canonically the third chapter in the saga of Laurie Strode and her masked tormentor, Michael Myers.

There will be a fourth: Halloween Ends, due next year. And the knowledge of this only serves to further dull the blade of Halloween Kills, a gruesome but episodic entry that never shakes off its thankless task of elaborately teasing the next, more climactic installment.

Years ago, Marvel did something similar with the equally dour Avengers: Infinity War, the first in a two-part finale that wiped out half of its shared universe. About that many people die in Halloween Kills, a ruthless picture with an extreme level of violence never seen in this series.

After a longwinded flashback to 1978, to events not seen in John Carpenter’s original classic, Halloween Kills brings the action back to 2018, mere moments after Green’s first film concluded. Andi Matichak and Judy Greer return as Allyson and Karen, the two generations of Strode women descended from Laurie.

Introduced as a hardened survivalist in the previous film, Laurie is at mercy of IV fluids and stitches on a hospital bed following her latest encounter with Myers. Reasonably, Karen protests everyone should stay put. But her daughter, because she’s a rebellious teenager and this is a horror movie, feels empowered to go after Michael herself. You can see where this is going.

It is still Halloween night in Haddonfield, but the party is over. Michael Myers has survived an inferno, and he’s more determined to add to his body count than ever. And boy does he. His rampage inspires Haddonfield to act, out of equal parts fear and rage, with a grownup Tommy Doyle (Anthony Michael Hall) raising a pitchfork. But as Haddonfield will soon learn, collective hysteria can do more harm than a knife in the throat.

Halloween Kills is far from a bad movie. It can be visceral, it’s ultraviolent, and it’s a throwback to the glory days of horror when slashers reigned supreme. It spews geysers of blood as though it were an Italian film from the ‘70s, brandishing a heavy-metal bravado reminiscent of the mid-aughts Rob Zombie remakes. Matichak, this series’ new star, also constitutes a compelling reinvention of the “final girl” trope: a perpetually active character who hunts for Michael as often as she runs from him. All told, Halloween Kills does its job, and then some.

But there’s something else on the filmmakers’ minds this time around, and that’s where Halloween Kills is harder to stomach. Green likes to keep his camera on Myers’ (many) victims to such a point that the film becomes hard to watch. Not just because of the brutality — Kills has many clever ways of creating holes in the human body — but because we’re forced to watch every moment of violence play out.

In one case, a lovely elderly couple falls victim to Myers’ reign of terror. One hopes this would end quickly. But many long minutes later, we’re still with these poor people, the already-dead husband hunched on their kitchen island, his wife watching helplessly as Myers punctures his body like a pincushion. Myers then moves along to her, and he’s just as merciless.

Another instance: Late in the film, Michael impales the neck of a young man with the jagged wood of a staircase. Again, the dude’s dead. But as Michael walks back down, he can’t help but twist the guy’s neck 180 degrees, just to shove it in the face of the girl who loved him, who’s sobbing as she watches.

What Green is trying to communicate to his audience, I’m not sure. But it feels hostile. I recognize it’s maybe absurd to complain about the violence in a slasher movie. Imagine ranting to a fast food restaurant about how they overcook the meat.

But there’s something unshakably unholy in Green’s work this time. His last Halloween was a remarkable revitalization of the slasher genre, bringing it back to form at a time when horror was (as it still is) in the throes of a radical paradigm shift toward restrained and existentially dread-steeped stories sometimes grouped as “elevated” horror outings. Halloween Kills is mean and lean, with a muddy and fairly empty message about shared traumas — as well as broad moralizing about groupthink that lands with a splat.

Even more damning is how unnecessary Kills feels. It has the energy of a binge-TV series’ second episode, with raised stakes but fewer novel thrills, struggling to sustain its momentum. Halloween Kills feels like a financial obligation more than it does a movie. Much commercial art works this way, of course, but Halloween Kills never outruns the feeling it exists to pad a studio’s quarterly earnings rather than to engage an audience. Even its strongest emotional beat, midway through, trips Kills up as if it were a lessons-learned network series instead of the autumn blockbuster it’s meant to be.

There are more brains than hearts involved with Halloween Kills. It’s a well-structured movie, with sensible plot points and moments of indulgent artistry that will make all other slashers crimson with envy.

I revisited the 2018 film recently in preparation, and I was dumbfounded in Halloween Kills to see two throwaway characters return in supporting roles, speaking this time. Green has some idea of what his endgame is, and he seems to know how to get there. Halloween Kills is an entertaining detour, but a detour nonetheless. Halloween Ends opens in 2022. Are we there yet?

Halloween Kills opens in theaters and streams on Peacock on October 15.