'Green Lantern' could set a new precedent for superhero storytelling

In brightest day, in blackest night... 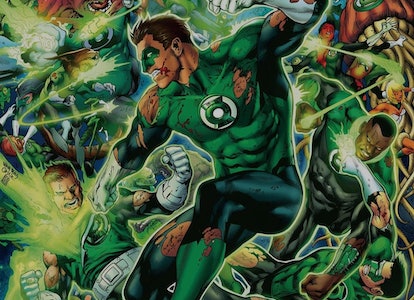 But the TV series from Seth Grahame-Smith, Greg Berlanti, and Marc Guggenheim won’t just cover Gardner’s tenure as a ring-slinger. Fan-favorites and new characters will make up the series, as Green Lantern takes an ambitious approach to serialized superhero storytelling, charting the Green Lantern Corps and its members across multiple decades.

If it sounds kind of ground-breaking in theory, that’s because it is — the way it’s sketched out, the Green Lantern series could very well set a new precedent for superhero storytelling writ large and fix one of the biggest things holding Marvel and DC movies back.

What is the Green Lantern TV series?

The description for Green Lantern, courtesy of The Hollywood Reporter is: "Green Lantern reinvents the classic DC property through a story spanning decades and galaxies, beginning on Earth in 1941 with the very first Green Lantern, secretly gay FBI agent Alan Scott, and 1984, with cocky alpha male Guy Gardner and half-alien Bree Jarta. They'll be joined by a multitude of other Lanterns — from comic book favorites to never-before-seen heroes."

Those unfamiliar with the lore of the Green Lanterns might find themselves, understandably, a bit skeptical about the property given the disappointing 2011 film, which even Reynolds has used as the butt of jokes. But never fear — after all, Green Lanterns must overcome great fear — because the storied saga of the Green Lanterns is one of DC’s greatest odysseys, blending elements of space opera, intergalactic crime, and cosmic horror.

Imagine if Star Trek, The Departed, and Event Horizon had a beautiful alien baby and you start to get the picture. Brilliant comics that have seen equally brilliant creators such as Bill Finger, Gil Kane, Alan Moore, Len Wein, Geoff Johns, and Grant Morrison among its many architects.

How Green Lantern can change superhero TV and film forever

In allowing Green Lantern to span decades, HBO Max has an opportunity to present the multitude of different tones and styles that have defined the Green Lantern comics over the decades.

While certain elements will thankfully be updated to reflect modern commitments to inclusivity, like Alan Scott living as a gay man in the 1940s, other elements like fashion and politics can reflect the time, and create a richer sense of legacy. And while fan-favorite GLs like Hal Jordan and John Stewart seem to be taking a backseat in this series (at least for now), the decision not to be confined by one setting or time period opens up the door for a bunch of different Lanterns to appear and all have equal time in the spotlight.

And that’s not even getting to the different color Corps that could later appear.

And lest we not forget, this time-spanning format also allows viewers to see the full scope of Thaal Sinestro’s rise and fall, and plant the seeds for the Sinestro Corps in a way that feels like character-driven payoff rather than a post-credit scene (looking at you, Green Lantern ’11).

The power of anthology superhero stories

Should the Green Lantern series’ decades-spanning format prove successful, it’s easy to imagine other superhero series within the DCEU and Marvel’s Cinematic Universe doing something similar.

Already there are reports of Disney+ planning a Wolverine anthology series that would see each season follow the iconic X-Man in a different era of his long life. While this would naturally be different from Green Lantern in that it would focus on one central character, it would also allow for much of Wolverine’s comic history to be covered, from the 1800s, through WWII, the Weapon X program, Japan in the 80s, right up until he joins the X-Men. Imagine the opening sequence from 2009’s X-Men Origins: Wolverine pulled apart so that each moment in time becomes a season populated with familiar adversaries and lost loves from Wolverine’s past.

One movie can’t do that. Marvel couldn’t even really do that in over 20 films stretched out over a decade. But the medium of television is perfectly suited for the era-spanning anthologies that comics readers take for granted.

So much of comic book storytelling is built around legacy, the passing of a mantle, or the actions of the past bearing fruit in the present. We’ve certainly seen this accomplished in superhero movies that use real-time. Now, there’s an opportunity to go beyond that; to have our prequels and sequels exist simultaneously, mirroring the experience of reading comics.

As superhero media continues to dominate our culture, creators are only becoming more fearless in how they approach the material. We no longer have to wonder which characters will be popular enough to matter on screen. They all matter, and the future couldn’t be brighter.

Green Lantern is currently in development for HBO Max.