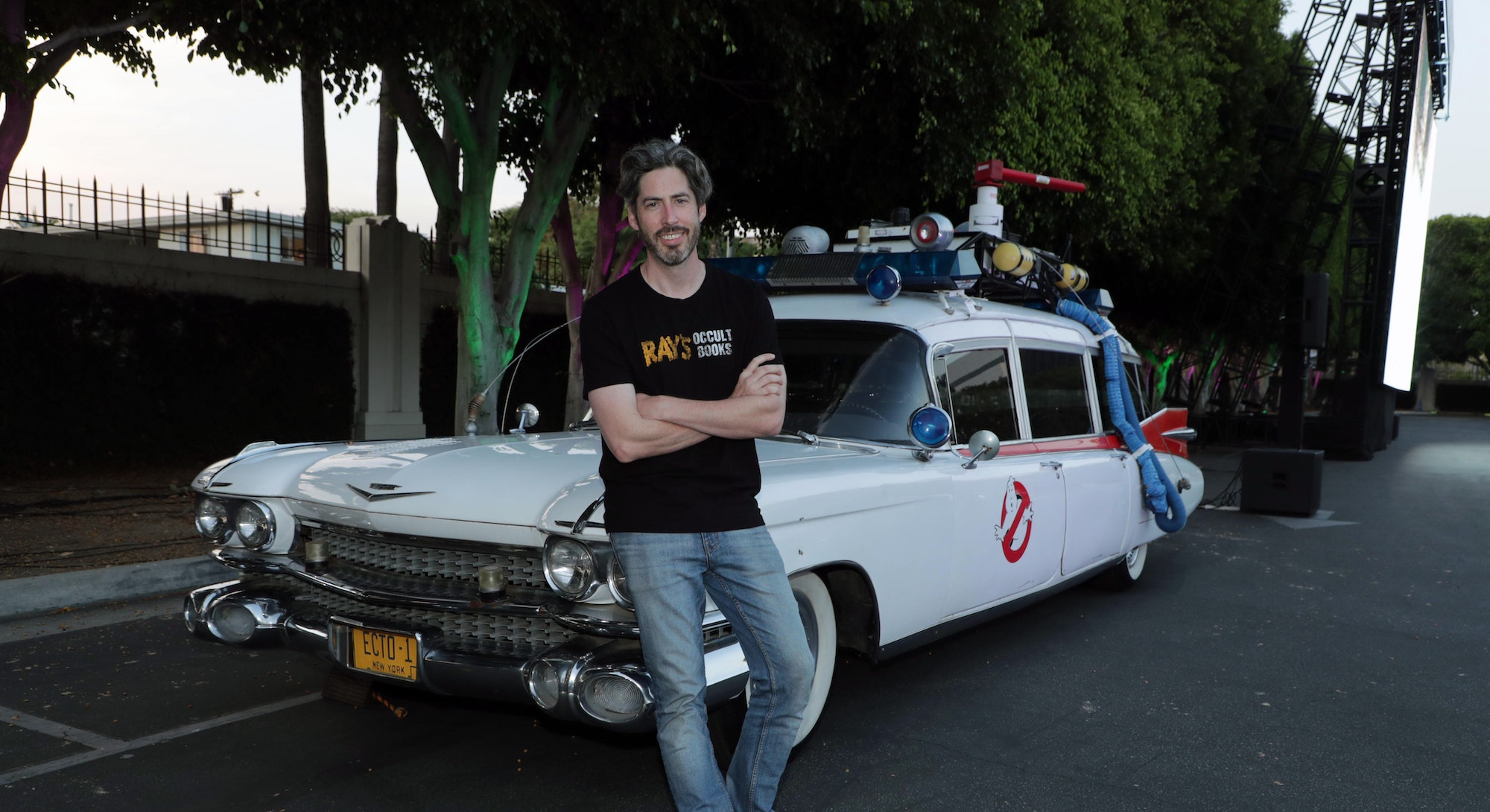 For Jason Reitman, ghostbusting is the family business.

In 1984, his father Ivan Reitman directed Ghostbusters, a pop culture phenomenon that ignited a multi-million dollar franchise. Powered by comedy legends Dan Aykroyd and Harold Ramis, who wrote the picture and starred in it with Bill Murray and Ernie Hudson, Ghostbusters blended horror with humor in a rags-to-riches tale of three parapsychologists who join forces to catch supernatural entities in New York City.

On the set of Ghostbusters, the younger Reitman, then six years old, watched his father work. 40 years later, their roles are reversed. On the set of Ghostbusters: Afterlife, the senior Reitman watched as his son, who’s previously directed Oscar-nominated dramas like Juno and Up in the Air, took the reins to deliver the long-awaited sequel to his original films. (It hits theaters on November 19.)

“It's intimidating to follow in your parent’s footsteps,” Jason Reitman tells Inverse over Zoom, noting the added surreality of having his father on set to directly weigh in on creative decisions.

Initially hesitant to direct a big-budget studio sequel, Reitman gave in when he couldn’t shake off the mental image of kids with ghostbusting gear in rural farmland. Now a father himself, Reitman says the image carried an added resonance.

“I never imagined directing a Ghostbusters film,” he explains. “Eventually, I came to a story I couldn’t get away from. To create a movie for everyone who’s ever loved [Ghostbusters], and for my father and my daughter, that became an opportunity I couldn’t pass up.”

Ghostbusters: Afterlife, which opens November 19, is about self-discovery in the shadow of an outsized legacy — a theme Reitman knows all too well. The movie introduces the Spenglers, a family of three led by a single mother (Carrie Coon) who move into a creaky Oklahoma home left to them by late relative Egon (originally played by Ramis, who died in 2014). Soon enough, teenagers Phoebe (Mckenna Grace) and Trevor (Finn Wolfhard) find a supernatural entity haunting their town. To fight back, they dive into their late grandfather’s cache of gadgets and gizmos from his days as a Ghostbuster.

Afterlife operates from a script co-written by Reitman and Gil Keane. At the 2021 New York Comic Con, Reitman told audiences the film came to him through two distinct images: a young girl wearing a Proton Pack, and a young boy drifting the Ecto-1 through fields of wheat.

“I wanted to break open what a Ghostbusters movie could be,” Reitman tells Inverse. After Ramis died in 2014, the filmmaker started to envision his new characters as two of Spengler’s descendants; he saw potential in a story about getting to know family members you could never be close with. For Reitman, “that’s what the movie is about,” he says: “all the things we want to say to our loved ones that we don't say. For the relationships that require repairing, what happens when that someone’s not around?”

Moving its focus from chain-smoking boomer adults to curious Gen Z teens, Afterlife takes a hard left turn into rural America — far from the franchise’s urban East Coast haunts. “For whatever reason, I imagined [this movie] in the American West,” Reitman says. “I wanted to tell a haunted house story about a family that inherits a home that reveals their legacy.”

The director adds he owes a debt not only to his father but to filmmaker Paul Feig, who directed the still-divisive 2016 reboot Ghostbusters with an all-female cast, including Melissa McCarthy, Kristen Wiig, Kate McKinnon, and Leslie Jones. Inspired by Feig’s work in resuscitating the franchise, Reitman says he felt comfortable pursuing his story about a girl with the tools, talent, and tenacity to catch ghosts.

“Paul Feig really did the heavy lifting [for me] in 2016 when he changed the idea of what a Ghostbusters film could be,” Reitman says. “It was thrilling to introduce new characters in a new location within mythology we’re familiar with. I’m really standing on his shoulders in making Ghostbusters: Afterlife.”

That’s not to say Reitman had it easy. Out of his comfort zone as a director of wry and relatable dramas for older audiences, Reitman had to flex muscles he’d skipped at the studio-lot gym to make a hybrid comedy-horror aimed at families. “To scare the audience is completely new [for me],” he says. “It was one of the most intimidating parts of the process.”

A meeting with Steven Spielberg only made the stakes feel higher. “I was at the Director’s Guild years ago and I happened to be next to Steven Spielberg,” recalls Reitman. “I said [to him,] ‘I’m gonna make Ghostbusters,’ and the first thing he said was, ‘Library ghost, top ten scares of all time.’ This from the creator of Jaws. The original was really scary, and [so] this one needed to be scary.”

With sound editors Perry Robertson and Will Files (who mastered the sounds of The Force Awakens), Reitman mined the original booms, blasts, and whirrs of the 1984 original in a way that brought Afterlife spiritually closer to its roots. “We went into the archives and found original sound files,” says Reitman. It wasn’t just the Neutrino Wand and Ecto-1 sirens they unearthed, but also the “rumbling clouds” that loomed over Manhattan, which appear remastered for Afterlife.

“It’s those Easter eggs you don’t notice but find their way into your bones and let you know you’re 1,000% watching Ghostbusters,” Reitman says. “We wanted to capture the original recipe: the music, the sound effects, the feel of the props, the ethos of believing in science. We tried to fill with as much practical filmmaking and ideology that connected to the original.”

While previous Ghostbusters movies, including the 2016 reboot, have been essentially workplace comedies, Reitman’s new film is about self-discovery and adventure. For Reitman, that sensation of finding the coolest toys in your basement is the battery powering Afterlife.

“The original is about four friends who go into business, [while] this movie is about the rest of us,” Reitman explains. “It’s [for] the people who grew up watching those guys. I wanted to find characters that could personify the child in all of us who wanted to rummage through the basement and find a Proton Pack.”

Afterlife is all about pushing forward on one’s own path, but it didn’t hurt that Reitman had help from a seasoned pro.

Both Reitmans were at one point on the set of Afterlife when its director wasn’t sure whether they’d nailed a scene. “I had to be sitting by one of the cameras, so I couldn’t see the monitors,” he explains. “After the take, I told them to play back the two cameras. My father went, ‘You got it.’ I go, ‘I’m sorry?’ He goes, you got it. I’ll never have a producer I could trust as much as my father.”