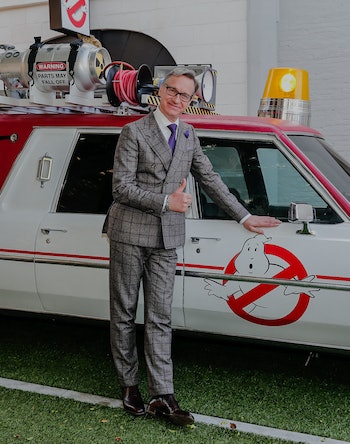 During the weeks before and after Halloween, filmmaker Paul Feig’s Twitter feed was filled with photos of women dressed up as the heroes of his recent Ghostbusters reboot. Young girls were decked out in brown jumpsuits; teenagers toted proton packs and Neutrona wands. For Feig, the photos felt like a vindication after a rocky year. Despite good reviews, his film’s disappointing box office returns meant that a sequel probably wasn’t in the cards — much to the delight of fans offended by a female-driven reboot.

“I get multiple tweets from women every day saying, ‘If I’d had this movie when I was a kid, I would’ve been an engineer by now’ or ‘I would’ve been a scientist by now,’ Feig told Inverse. “Just take all the other swirling angst that was surrounding us, that came at us from so many sections of the internet — if I could just erase those voices, I’d go, ‘Oh, we’re actually all very pleased.’”

The costume tweets were a celebration of a rare victory in Hollywood for true inclusiveness, but for bottom line-driven executives and box office pundits, they were irrelevant. Feigs Ghostbusters has not yet earned enough money to merit a sequel — it is still in the red — making its legacy subjective. Feig is happy with the movie, and even happier with the enthusiastic response from his intended audience. But he also has to deal with business considerations, as well as an increasingly more opinionated class of internet pundits. And with both groups, sequels are very, very important.

In late October, when members of the press filed into the theater for a pre-screening of Doctor Strange, they were greeted with paper signs posted on every wall, a carpeted maze covered in pleas for editorial discretion. And while Disney’s Marvel Studios may have been worried about journalists spoiling their new superhero movie for the public, the explicit request concerned what happened on screen after the credits began rolling. It was more imperative that the teases for the next Marvel movies remain a secret, because it’s the orchestrated speculation about what might happen in its future films that gives this multi-billion dollar franchise its incredible staying power.

Marvel’s mastery has sparked an industry obsession with sequels and so-called shared universes. Sony, which successfully rebooted 21 Jump Street, spent years trying to follow up on the mega-success of the first two Ghostbusters films from the 1980s, and there were huge expectations placed on Feig’s reboot. The studio hoped that the July release would hit with a bang, creating a sprawling new multi-media universe.

“I’d be lying if I didn’t say [sequels] are not in the back of your head a lot of times,” Feig said. “Especially when you’re going, ‘Let’s not kill off the main characters at the end, then we could have a sequel possibly.’ But our job as filmmakers is to tell a complete story in two hours that resolves itself in a satisfactory way.”

Feig worked hard to satisfy both his bosses at Sony and his own creative imperative, and felt that he had found a way to do so. The film was set up as an origin story, introducing its four new heroes, who were played by Kristen Wiig, Melissa McCarthy, Kate McKinnon, and Leslie Jones. The idea was to assemble a team and send them on a first adventure in this movie, setting them up for subsequent episodes going forward.

“We’re filmmakers and we’re business people, so we can’t operate from a place of ‘Oh, who cares what happens at the box office, people will like the movie down the line,’” Feig said. “We’re always trying to walk the two worlds. You’re trying to make something that can stand the test of time and can be watched over and over and over again, but you’ve still got to make money for the people who are putting the money into it.”

Made for around $140 million, Ghostbusters grossed $229 million at the worldwide box office, far short of what Sony had been hoping. But between its many lucrative marketing tie-ins and brisk VOD and home video sales, its loss for Sony should be far less than the $70 million projected by trade outlets — and it will eventually break even with repeated cable television airings.

“I mean yeah, never say never. I think it probably depends how much money people want to put into something,” Feig said. “That’s sort of the legacy you’re left with: ‘Okay we want to do this, but we want to do it much cheaper. We want to do it for this price versus that price.’ Those are the realities to deal with, but at the same time, sure [I’d be interested].”

And so for now, there is a split in the traditional metrics of success: Creatively and socially, Ghostbusters could be considered a triumph, but it’s a bit more of a wash on the business end. The perception of fans and internet pundits is the third metric by which movies are now measured, and is in many ways both the most complicated and important metric of all.

The onslaught of fan service and sequels has in many ways skewed the public perception of good work and success. Box office speculation and reporting, once relegated to trade papers, is now an active internet pastime, as fans root on their favorite properties to make enough money to earn bragging rights and sequels. And if a movie doesn’t do well, that too colors fans’ perception.

“It’s kind of a bummer that it’s become that way because, I’m in my 50s now and growing up we didn’t have that,” Feig said. “I didn’t have TV rating either. I remember I loved this show that Mel Brooks did, When Things Were Rotten. I watched it every week, and I was like Oh my god, this is great, people must love this! Then it gets cancelled, you find when you read about the industry, that it was ratings disaster. You’re like, but I loved that show! Honestly, we know too much about showbiz now.”

Sometimes, it doesn’t even take that long for a narrative to form. Public perception is often shaped even before a movie is released, based on reactions to trailers and tangential issues. And when sexist trolls made Ghostbusters trailer the most downvoted in YouTube history, it made life especially difficult for the movie’s cast and crew.

“That’s the bummer, when you go, ‘Shit, if people just didn’t know about every little aspect about showbiz, they’d just go Oh I want to see that or I don’t, I’m interested in that movie or I’m not’ and that would kind of be it,” he said. “It’s especially a bummer that the box office is so prevalent in the public’s mind.”

Fans of Marvel and DC Comics — which has its own haphazard cinematic universe — are constantly on the hunt for clues as to what’s next. Harry Potter fans rejoiced when it was announced that there would be five movies in the Fantastic Beasts spin-off series before the first even hit theaters. And Feig finds himself in unfamiliar territory, because usually, fans are clamoring for sequels to his movies and TV shows, and other than a script for a The Heat sequel squashed by star Sandra Bullock, he has never felt creatively moved enough to deliver a follow-up.

“So many people want a Bridesmaids sequel, and I always kind of say yeah it would be fun, but at the same time think about it: The reason that movie is so good is because it’s the personal story of this one woman getting her life together, so if you then do a sequel, it’s like well she can’t fall apart and have to get her life together again,” Feig said. “Then it becomes, potentially, a little more superficial because it’s another crazy wedding or something.”

It’s the same with a potential Freaks and Geeks reunion: People want it, but he says he “won’t do it until I’ve got that idea where I’m like, ‘Holy shit this is it, this is the perfect way to add to what we had,’ I don’t want to do it. It’s fraught with peril because you don’t want to back-pollute what you’ve done before.”

And that’s where the question of legacy comes in once again. Can a bad sequel tarnish a film? If so, is it better to never make the sequel, even if that choice also impacts the public perception? This year has seen the overwhelming rejection of long-delayed sequels, such as Zoolander 2, and those failures can have a chilling effect on creativity.

“It’s always been bad in the past when just anything will be kind of slapped together just to make a quick buck,” Feig continued, noting that this summer was particularly hard for many filmmakers. “That’s not cool, and that hurts filmmakers down the line because then they’re less willing to take a chance on something that should be sequeled or should be done that’s challenging.”

Only time can shape the new Ghostbusters legacy, and even then, it will depend on who you ask. Some fans may see it as a galvanizing piece of media, others may forget it entirely. Hollywood execs will likely write off any loss and continue to pursue a broken strategy. As for Feig, he seems to be okay with the strong possibility that it was his one and only experience with the franchise he had wanted to run for years — regardless of what the internet trolls who handicapped it in the first place have to say.

“I would’ve loved to make more money, but at the same time, as you get further away from that moment when you were in the theaters and the controversy and all that, it does become more about, ‘Did we make a good movie and did we make a movie that people like?’” he reflected. “All I can tell you is that my Twitter feed is just absolutely filled with things from people who loved the movie and then there’s always a few things from people that hated it. The amount of people who loved it is so enormously larger than the people who didn’t like it and to the people who didn’t like it, you just kind of go, ‘Gang, it exists now.’”