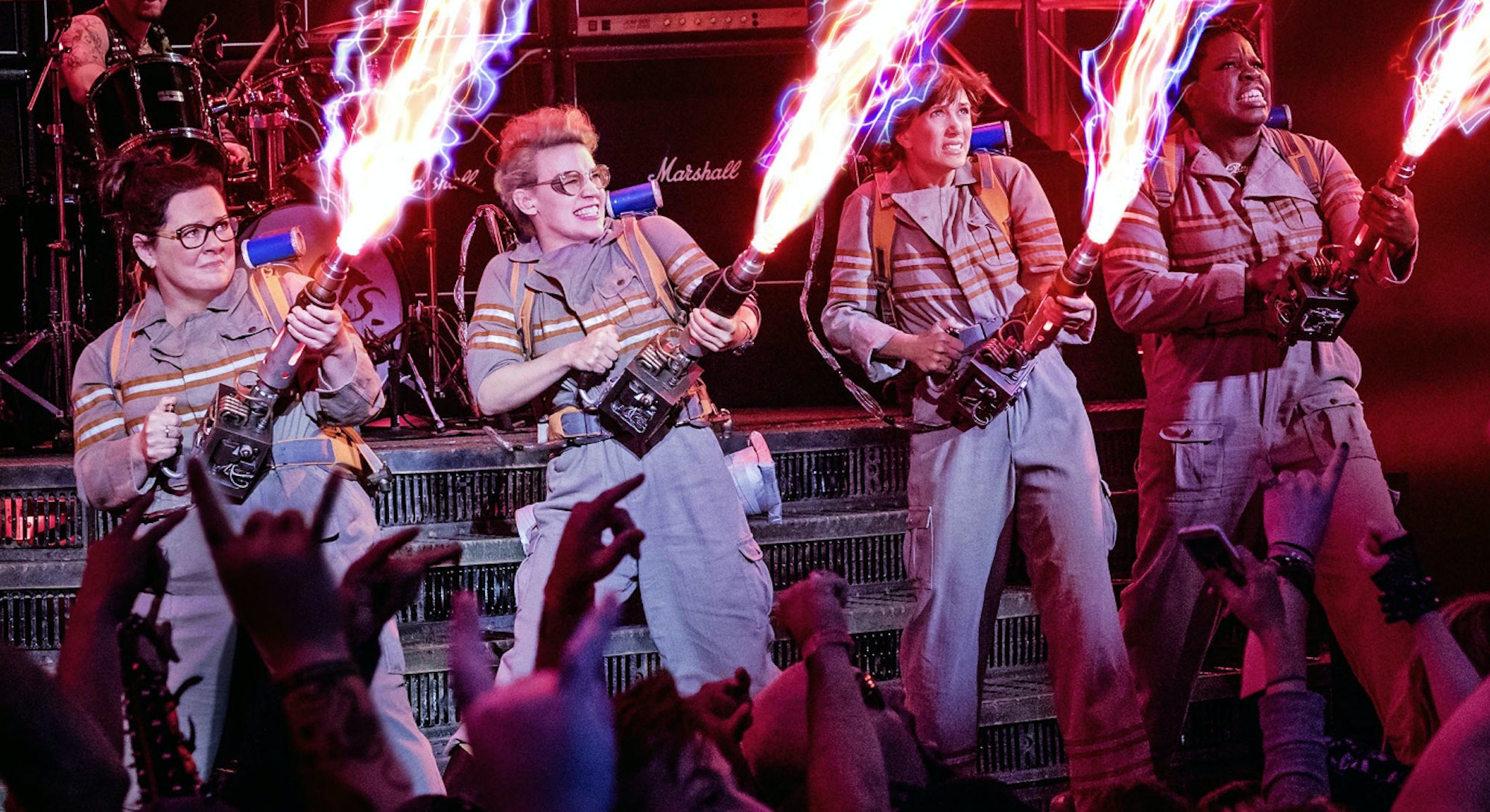 Hollywood studios have long tweaked and trimmed movies based on the feedback of advance test audiences. Now, the rise of powerful fandoms and ravenous media coverage of every stage of production means that, for better or worse, public opinion can have a sizable impact on the shape of a film from its inception.

The new Ghostbusters reboot has been victim to this intense new version of scrutiny since the moment it was announced in summer 2014. And because writing on the film began after sexist troglodytes started a backlash campaign against its gender-swapped reworking of the 1984 original, it was inevitable it would seep into the movie itself.

“It honestly wasn’t intentional, but I think it was subconscious,” Katie Dippold, who co-wrote the film with director Paul Feig, told Inverse on Monday, about how backlash against an all-women Ghostbusters team wound up shaping the script. “I feel like the world today, everyone’s looking for approval on social media and everywhere else, and so to me the goal of this movie was that these four weirdos can just go after what they’re passionate about, and not care that they look like maniacs, and be OK with that, and just be happy with this family that they made.”

The film, which currently has a 77 percent positive rating from critics on Rotten Tomatoes, stands on its own, with a plot that does not require a crash course in current events or a timeline detailing the patterns of mindless misogynistic abuse hurled at the film’s creatives. In the end, it’s about four friends fighting ghosts in New York City, an idea that works 30 years after its original inception, and should prove malleable to reboots 30 years into the future.

But any audience member aware of the “controversy” can’t help but notice moments in the film that seem like direct responses to the backlash and sexism in general, from having the Mayor of New York demand the women keep their mouths shut as they continue to do the city’s dirty work, to having to deal with sexist internet comments.

“I’m sure it’s not a coincidence that as me and Paul were writing it, we would look online and say, ‘Oh, this person wants me to get hit by a truck, OK,’” Dippold laughed.

There is one scene in particular that plays like a reference and retort to the hostile reception the film received throughout its production and marketing, including the concerted campaign that gave its trailer the most downvotes in YouTube history.

Erin (Wiig), one of the team’s leaders, posts videos of their encounters with ghosts on YouTube in an effort to convince the world that their work is real, and that New York City is under supernatural attack. They make the horrible mistake of reading some of the comments on one of the videos, which says, “Ain’t no bitches gonna bust no ghosts.”

It would come as no surprise if the scene was added late in post-production, as a direct response to the downvote insanity. Instead, the moment was always in the screenplay, though it was certainly shaped on set by an awareness of the general vitriol directed toward the film.

“The YouTube stuff was organic to the story; Erin’s character is someone who is trying desperately to legitimize herself, so she keeps putting up these videos, hoping to get validation, which you are just not gonna get from the internet,” Dippold said. “The basic story of them putting the video online and reading comments was always there.”

“We tried a bunch of versions of what that line was, what exactly was being said,” Dippold explained. “The original line in the script was, ‘I wanna slap dem wit dis dick.’ Then on the day, I know they played around with it. We had different versions. Paul always has trusted writers that pitch jokes and stuff like that, so it was an alt.”

The joke functions as sort of a release valve, allowing the cast and crew to address the criticism without fighting the haters and getting off track. Writing this film was a challenge on all fronts; not only did it have to work on its own, it also had to straddle the line between establishing its own legacy and satisfying an unsatisfiable group of recently converted Ghostbusters purists who wanted to see the original film honored without end.

“That was always the big debate, of how much stuff to bring back,” Dippold explained, noting that everyone on set down to crafts services, who provided cookies in the shape of Slimer and the Stay Puft Marshmallow Man, revered the first film. “It felt like one of those things that was never going to make anyone happy. And so at the end of the day, it was like, goddamnit, I want to see Slimer, I want to see all those cameos, I want to see all those people again. The goal was, can we make the story and characters stand on its own? And if we could do that, we could allow ourselves all the treats from the original.”

They settled on plenty of references — the surviving main members of the original cast all appear — in a film that, despite misogynistic hand-wringing, is as reverent to a goofy 32-year-old comedy as possible.

“Whatever complaints they may have — and I’m sure there will be complaints — I don’t think you can see it and say they don’t love the original Ghostbusters.”