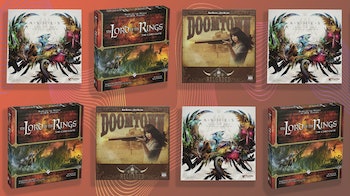 With the growth of the digital age, some people worry that old-fashioned card games are dying out. In fact, a 2015 survey found that kids ages 7 to 14 are 40% less likely to play card games than their parents. It seems unlikely, however, that classics like Magic: The Gathering (MTG) will suffer such a fate. The trading game's most recent mobile spin-off launched last year and Amazon is teeming with expansion packs. The fact that it continues to be popular, however, doesn't mean that you don't need a break sometimes. Fortunately, there are plenty of games like Magic: The Gathering that incorporate fantasy and world-building themes into strategy-based collectible card games.

So what should you look for in an MTG alternative? First of all, if it's going to captivate you the same way that MTG does, it needs to have a trading component. Regular board games or card games won’t cut it if you can’t buy more expansion packs and build your own decks. Another important element of any substitute is for it to involve battling foes or fulfilling some sort of heroic mission. Whether it’s wizards and warlords or monsters and trolls, there ideally needs to be an epic clash or a deep mystery to solve. If the game has role-playing elements or a digital counterpart, that's even better.

Below are some collectible card games like Magic: The Gathering, many of which have been vouched for by Amazon reviewers for their delightful similarities.

1. This fantasy Wild West reboot where you fight bloodthirsty outlaws

The lowdown: This fast-paced collectible card game, which is a reboot of the 1990s classic, gives you the chance to dominate the Wild West amid crooked sheriffs and murderous outlaws. To win, you must be smart enough to rack up more deeds than your opponents and take control of the town of Gomorra. Throughout the game you do a lot of shooting guns, slinging mud, and playing rounds of poker.

One reviewer wrote: "I really love the setting, as I love westerns and played a lot of Deadlands when I was a kid. The ability to get into shootouts, complete jobs like robbing stagecoaches, and the poker elements really sell the setting. The incorporation of poker rules into the game makes it really fun, but that does not take away from the strategy of this game, which is great."

2. The ‘Game of Thrones’ expandable card game that involves battling your way to the Iron Throne

A Game of Thrones: The Card Game
Amazon

The lowdown: If you're into Game of Thrones, you'll love this expandable card game version. Like the HBO series (as well as the books), the game is set in the Seven Kingdoms and the goal is to take control of the Iron Throne. You'll fight in bloody wars, manipulate your enemies, and come up with clever strategies to outwit your foes. The starter deck comes with 240 cards and monthly chapter packs are available.

One reviewer wrote: "I've had this game for months now and can honestly say I enjoy it much better than Magic. It allows for more backstabbing and alliances in 3 or 4 player games. The different kind of challenges in my opinion are more interesting than the run of the mill attack/defend of MTG. Also, winning by gaining power instead of lowering life total seems to make the losing player feel a little less angry when being overrun(At least in my experience). Overrall good fun!

The lowdown: Set in the quiet New England town of Arkham, this game allows you to be an investigator with your own set of strengths and weaknesses in this living card game. Unravel terrifying H.P. Lovecraft-inspired mysteries in a fantasy world full of monsters and cultists. The collectible game is also available in an app version.

One reviewer wrote: "This game delivers on the theme and story in spades. Cooperative gameplay with your own deck means minimal 'quarterbacking' by other players, the deckbuilding feels like its there, but not something you're required to be amazing at in order to enjoy it, and the difficulty settings do a good job of fine tuning what level you want to play at. I abandoned Magic after 14 years of playing because I had too many other gaming demands on my time, but this is something I can see keeping up with as an ongoing thing."

4. A magical strategy game filled with spell-casting and beautiful artwork

Ashes: Rise of the Phoenixborn
Amazon

The lowdown: Similar to MTG, this beautifully illustrated option is one of the best strategy card games out there. It brings you into the fantasy world of Argaia, where you'll use strategy to fight enemies, call upon allies, and create cooperative magic spells. Each roll of the dice allows you to change power levels, and you have the option of playing with pre-built decks or building your own.

One reviewer wrote: "This game can appeal to two different gaming crowds, the board gamers and the deckbuilder/card enthusiasts. It's kind of got the feel of Magic the Gathering but is definitely it's own game. The turn system is really cool and takes a minute to get used to but after a turn or two you'll have this mostly down. I like that it can be played with suggested deck lists, building your own, or drafting- this makes it more accessible for more people."

5. This exciting ‘The Lord of the Rings’ card game in which you destroy the ring and save Middle-earth

Lord of the Ring: The Gard Game
Amazon

The lowdown: The Lord of the Rings fans will get the opportunity to dive back into Mordor and Middle Earth in this fun expandable card game. Decks are built from four spheres of influence, and the goal is to defeat Sauron as you overcome obstacles. It comes with 226 cards and three quests, giving you multiple replay options.

One reviewer wrote: "I love this game. It is infinitely customizable and a real blast to play. It really does capture the "feel" of LOTR and the designers really know their lore. The gameplay is smooth, fast and tension-filled. It will take you a while to learn the rules entirely, but after 2-3 playthroughs, you'll be able to do it without referencing the rulebook. It might be a bit advanced for new players or kids, but if you've played Magic or any other CCG, you'll pick it up fast."

6. An intriguing cooperative card game based on ‘The Dresden Files’ books

The lowdown: Based off of the hugely popular Dresden Files book series, this cooperative card game takes you into the urban fantasy world of Harry Dresden and friends. You get to investigate mysteries of the supernatural (vampires, werewolves, and more), and if you roll the dice just right, you can solve the mystery and defeat your foe. The game is also available in a digital app version.

One reviewer wrote: "This card game is intentionally challenging, meaning you won't win each time, but it is definitely worth the money. A good cooperative game is not one that you will win each time, since there is no struggle involved. This has a perfect amount of strategy and "Should I do this? What if that costs us the win?" balanced with knowing what to do and figuring out the best way to solve the problems. I've only played with two players total, but I have no doubt this would be great with up to five people and just as good playing solo."

More like this
Entertainment
3 hours ago
Weird sh*t under $30 that SO many people are obsessed with
By Christina X. Wood
Gaming
17 hours ago
The 6 best portable chargers for Nintendo Switch
By Maria Cassano
Innovation
12 hours ago
The 6 best radio headphones you can find on Amazon
By Rachel Dunkel
Related Tags
Share: