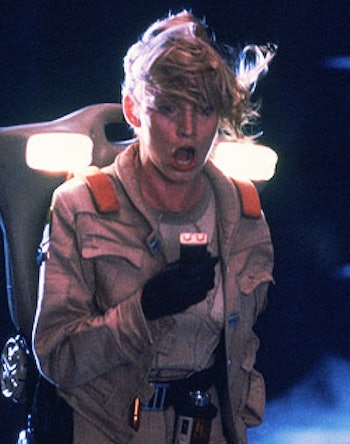 “Your countdown to hell is about to begin!”

So teased the tagline for Galaxy of Terror, a sci-fi schlock horror movie that’s proved surprisingly influential in the 40 years since it was originally released.

As Hollywood first entered the ‘80s, the B-movie industrial complex was in the midst of a feeding frenzy, as every producer in town sought to capitalize on the success of Ridley Scott’s Alien (1979). Not even a year after the last survivor of the Nostromo had signed off, Italian director Ciro Ippolito took advantage of a copyright infringement loophole to cheekily title his film, a blatant rip-off, Alien 2: On Earth.

Less discerning fans may also have been hoodwinked by Alien: Contamination, Luigi Cozzi’s follow-up to the equally shameless Star Wars cash-in Starcrash. And in 1981 alone, Inseminoid, Outland, and Galaxy of Terror all borrowed heavily from Scott’s instant classic with tales of intrepid humans battling extraterrestrial life.

Galaxy of Terror, which turns 40 on October 23, surpasses the other exploitation fare of its day largely thanks to the involvement of its production designer and second unit director: none other than future blockbuster titan James Cameron. Let’s look back at the film that not only helped to put Cameron's name on the map but also (loosely) shaped the future of Alien.

Galaxy of Terror is undoubtedly the most well-connected rip-off to emerge from all the post-Alien cash-grabbing. That’s perhaps because its prolific B-movie producer Roger Corman — colloquially known as the Pope of Pop Cinema — was at one point in talks to bankroll the original Alien, then known as “Star Beast,” before co-writers Ronald Shusett and Dan O’Bannon decided their story deserved more than his low-budget exploitation treatment. But when the film entered production, no one could have predicted that Cameron — then at the very beginning of his career — would progress from working on Galaxy of Terror to directing Aliens.

Cameron had first caught Corman’s attention with his directorial debut Xenogenesis, a 1978 sci-fi short whose villain wasn’t a terrifying phallic-headed alien but a giant cleaning robot. However, it was the “spaceship with tits” Cameron designed as a miniature model maker for 1980’s Battle Beyond the Stars that made Corman realize he’d discovered his latest protégé.

Having previously given a leg-up to Martin Scorsese, Francis Ford Coppola, and other rising filmmakers in New Hollywood, Corman had no qualms about handing over art direction duties to Cameron, then 25, who seemed hungry and innovative enough to deliver the George Lucas riff he was looking for. Cameron’s ability to create authentic-looking sets out of scraps — the starship interior was constructed from discarded McDonald’s packaging, for example — was the most impressive asset he brought to Corman’s factory, and another promotion soon ensued.

Galaxy of Terror let Cameron showcase his eye for design and ability to manage a shoestring budget. Those polystyrene Big Breakfast trays came in handy for the no-frills Quest spaceship and desolate fictional planet of Morganthus, both of which were constructed in an abandoned wood yard in California. And you can’t help but admire the sheer grotesquerie of the tentacled, ton-weight creature that nearly got the film slapped with an X certificate. On Galaxy of Terror, though, Cameron was also much more involved outside of these departments.

Frustrated by the poor lighting and framing work on the production (Bruce D. Clark sat in the director’s chair), Cameron persuaded Corman to give him a shot behind the camera. And much of Galaxy of Terror is still shrouded in near-darkness. Initially, Cameron’s on-the-job training was restricted to special effects close-ups: see Quuhod’s murderous severed arm crawling with wriggling maggots, a shot imaginatively achieved by Cameron using electroshocks.

That's right: in order to make a bunch of reluctant maggots wriggle around, the quick-thinking Cameron disguised and hooked up an electrical cable to the arm prop, sending electricity through it during the shot. Amusingly, the producers walking by his shot at this exact moment later said they’d believed the maggots were complying, of their own free will, with calls for “Action!” and “Cut!”

“What I hear back later [is] ‘If he’s that good with worms, I wonder what he can do with actors!’” Cameron later recalled. Yet, with Galaxy of Terror falling behind schedule, the future Oscar winner also served as a makeshift first-unit director, trusted to work with actors as well as legless larvae. It seems like the few most stylish scenes were the work of Cameron and not Clark, his superior. The climactic battle, for example, is bathed in the kind of strong-blue hue that would reappear in Cameron’s later directorial ventures.

Unsurprisingly, Cameron and Clark have both been keen to distance themselves from Galaxy of Terror’s most notorious scene: the one where Dameia (Taaffe O’Connell) is stripped, assaulted, and slaughtered by a revolting 12-foot maggot. This scene would have been troubling enough had the victim’s cries of terror not given way to screams of pleasure. But Corman, who added the scene to the script to appease financiers demanding sexual content, was out to shock.

Corman later claimed the scene wasn’t just a concession to lecherous executives but an artistic representation of Dameia’s facing her deepest fear: sexual intimacy. But that opens up a whole other can of worms, pun intended. The terror afflicting the Quest crew — sent on a rescue mission to Morganthus by their mysterious leader — is supposedly derived from their subconscious minds. Yet the characters are so thinly drawn their id’s darkest manifestations make little sense. As a result, all their horrific demises (Erin Moran’s exploding head almost gives John Hurt’s chest-bursting a run for its money) seem entirely inconsequential, too.

Still, this premise did give other filmmakers ideas for ripping off Alien: Paul W.S. Anderson’s Event Horizon, in 1997, executed the whole “deepest fears come to life in space” scenario much more effectively. In a more roundabout way, Galaxy of Terror also informed the franchise it so heavily borrowed from. Impressed with his double duties on Galaxy, producer Ovidio G. Assonitis offered Cameron the chance to direct Piranha II: The Spawning. After filming that project in Rome, Cameron had a fever dream about a robot hitman from the future sent to assassinate him, inspiring his script for The Terminator. His success with this project ultimately led him to the task of bringing Ripley out of a 57-year stasis.

Released in 1986, Aliens saw Cameron invite several collaborators from his Corman days to help out on set. Bill Paxton — who, believe it or not, painted Galaxy of Terror’s sets — was cast as the ill-fated fan-favorite Private Hudson. Robert Skotak, the production designer responsible for Galaxy’s menacing pyramid, was part of its Oscar-winning visual effects team (which may explain why the surface of LV-426 bears more than a passing resemblance to Morganthus). Even composer James Horner, whose chilly score does much of the heavy lifting in Galaxy, was brought back in the same capacity.

As you’d expect from a major studio sequel with nine times more money at its disposal, Aliens is an entirely different beast than Galaxy of Terror. That said, you can see elements of Cameron’s previous spacemen-in-peril picture in his bigger and better Alien sequel. In this way, Galaxy of Terror deserves to be remembered as the invaluable training ground that set Cameron down a path to become the King of the World.

Galaxy of Terror is now streaming free with ads on Tubi, IMDb TV, and Dailymotion.