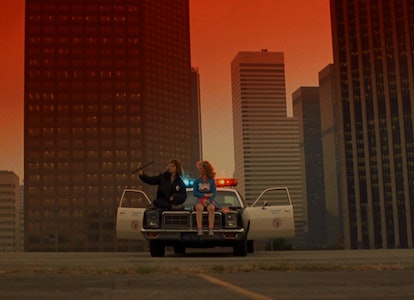 At first, for teenage sisters Regina (Catherine Mary Stewart) and Samantha (Kelli Maroney), the apocalypse is just another bad day.

Reggie and Sam wake up the day after a comet passes over Earth to discover that they are among the only people on the planet left alive. The resilient teens take the unexpected situation in stride, and one of the great things about 1984’s best sci-fi apocalypse movie is that it remains a bubbly teen story even as the characters confront some harsh realities.

Writer-director Thom Eberhardt’s delightful sci-fi comedy Night of the Comet isn’t the most famous 1984 movie to imagine an apocalypse (there’s no beating the Terminator), but it makes up for a lack of Arnold Schwartzennagr with a delightful exploration of how a pair of teens might react to the end of the world.

Ominous opening narration describes a comet that comes around only once in an extremely great while, and which last passed by Earth when the dinosaurs went extinct. People don’t seem concerned, though, and there are parties around the globe to welcome this once-in-a-lifetime event, including people holding signs with messages like “Don’t panic! It’s completely safe.”

Reggie and Sam don’t pay much attention to the comet at all, and they survive mainly thanks to dumb luck. Reggie is more focused on her annoying boss and rude customers at the local cinema — and her potential hook-up with a film-bro projectionist.

That geeky projectionist and his fixation on keeping track of his mint-condition print of 1953’s It Came From Outer Space keep Reggie safe because she spends the entire night in the steel-lined projection booth. Across town, Sam has a fight with the girls’ stepmother Doris (Sharon Farrell) and resolves to run away, but she only makes it as far as the steel lawn shed, where she spends the night out of spite. Meanwhile, as the comet passes over the planet, it turns nearly every human and animal into fine copper dust. Working with a limited budget, Eberhardt convincingly depicts the apocalypse with just some orange-tinted skies and empty piles of clothes on the ground.

Reggie emerges from the movie theater to face a deranged mutant, whose condition is caused by partial comet exposure. It’s clear right away that these aren’t helpless young women. She swiftly takes down her attacker and then steals his motorcycle to ride home to her sister. “God, you look terrible,” Sam snarks, not yet fully understanding the scope of what’s happened. She’s still in her pep squad uniform and ready to go to practice, only slightly perturbed that she can’t reach any of her friends on the phone.

With their big hair and colorful clothes, these two LA teens could be seen as valley girls, and there’s a bit of that affectation to the way they talk. “Do you think whatever happened, happened everywhere, like in Burbank and places like that?” Sam asks as they walk into a local radio station that seems to be broadcasting live, in hopes of finding another human being who hasn’t been horribly mutated. When they arrive, they discover a looped recording playing over the air, but they’re soon joined by truck driver Hector (Star Trek: Voyager’s Robert Beltran), who immediately takes a shine to Reggie.

There’s a brief post-apocalyptic love triangle, but Eberhardt doesn’t turn the sisters into bickering rivals. They confront their differences head-on and resolve them with the same kindness and optimism that sees them through the end of the world. Stewart and Maroney have effortless chemistry that conveys the characters’ deep sibling bond with just a look and a laugh.

It may have been luck that spared them the initial wrath of the comet, but Reggie and Sam prove smart and resourceful once they’re forced to survive on their own. Eberhardt steadily doles out fascinating tidbits about the girls’ never-seen father, a lifelong military operative who seems to have been working as some sort of mercenary at the time that the comet arrived.

It’s fun to see Reggie and Sam confidently handle firearms, engaging in target practice on an empty car and complaining about the quality of weapons available to them. “The MAC-10 submachine gun was practically designed for housewives,” Reggie offers. Sam agrees: “Daddy would’ve gotten us Uzis.”

Perhaps the movie’s defining visual moment is a shot of one of those MAC-10s placed carefully next to a display of high heels as the sisters decide to raid a mall department store for new outfits (soundtracked, of course, to a knock-off version of Cyndi Lauper’s “Girls Just Want to Have Fun”).

But it’s not just a cute touch that these vivacious teen girls are experts in weaponry. Eberhardt also provides evocative detail in their story of how their dad really wanted boys, and eventually gave up on them, marrying Doris to provide them with a new mom and heading off to fight other people’s wars. The movie deftly subverts the stereotype of the helpless teen girl in a sci-fi thriller, without just making the characters into copies of their male equivalents.

The movie turns more serious in its third act when Reggie, Sam, and Hector encounter a group of scientists who anticipated the comet’s effects and are now rounding up survivors, with potentially sinister intent. Cult movie legend Mary Woronov plays a sympathetic scientist who encourages the trio to escape, and she brings an extra layer of melancholy to the supposedly responsible adult who understands how everyone in charge has failed to safeguard humanity.

Even in the face of imminent danger, though, Reggie and Sam remain upbeat and ingenious, and they never forget what’s most important. “Hey, that’s a great outfit!” is Reggie’s first remark to Sam when her sister shows up to save the day. It’s as much an expression of sisterly solidarity as it is a comment on fashion. “The whole burden of civilization has fallen upon us,” Reggie says with a mix of resignation and excitement near the end of the movie, and there’s no reason to believe that she and her sister won’t handle it perfectly.

Night of the Comet is streaming for free on Pluto TV, Tubi, and YouTube in the U.S.