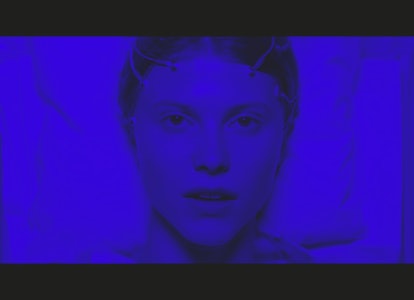 What if Jean Grey was a repressed Norwegian lesbian? That’s not an inaccurate way to describe filmmaker Joachim Trier’s fourth feature, a haunting and austere story that resembles an X-Men origin tale in its navigation of blossoming power and terrible consequences. After her sheltered upbringing in a rural area by strict religious parents, a young woman (Eili Harboe) leaves home to attend university in the city, where explorations of her long-stifled sexuality coincide with the onset of strange, sometimes terrifying abilities.

Though this kind of narrative could have come right out of an X-Men hero origin story, Trier isn’t interested in comic-book storytelling. What makes Thelma so powerful is the way it combines its recognizable sci-fi/superhero elements with the kind of methodical, character-based storytelling that Trier also brought to his earlier, more grounded features (Reprise; Oslo, August 31st; Louder Than Bombs). It’s a unique combination worth watching – especially given that the film is streaming for free online.

As the film progresses, Thelma begins to exhibit telekinetic and telepathic powers, with dangerous and frightening implications both for her and those in her orbit. But Thelma is also just a young woman figuring out her life and finally rebelling against her parents’ harsh, moralistic teachings. “Why can’t I just be what I am?” she pleads with her father Trond (Henrik Rafaelsen) toward the end of the film, and she’s not simply talking about his efforts to isolate his daughter and suppress her powers with sedatives. Given Thelma’s interest in the ways faith can be weaponized to quell expressions of individuality, it’s a powerful moment that also finds the character begging to be accepted despite expressing an inner truth she’s been taught goes against God.

It’s clear from the beginning that something is not quite right with Thelma. Trier’s film opens with a disturbingly serene scene of Thelma as a child, accompanying her father as he hunts in the woods near their house. As they spot a deer, Thelma is mesmerized, and Trond pulls out his rifle. But he doesn’t point the rifle at the deer—he points it at Thelma, holding it there for far longer than is comfortable, before finally lowering it. The deer runs away, and young Thelma is none the wiser. The look in Trond’s eyes as he contemplates shooting his daughter isn’t anger or hatred. It’s fear and regret.

Years later, Thelma acts like a normal, slightly shy college student, diligently studying and calling home to check in on her parents. They sound perhaps overly concerned when she talks about her difficulty making friends. Thelma’s parents also keep track of her class schedule online, interrogating her about her movements and attendance at lectures. It’s easy to chalk this up to typical behavior by overprotective parents, at least at first, but Trier lends the proceedings a threatening undercurrent, as if Thelma’s parents have released a dangerous animal among unsuspecting students.

Is Thelma’s nature that of a deer, as per that opening scene, or is she a lioness? Trier and co-writer Eskil Vogt carefully avoid answering that question for the bulk of the film, toying with expectations of sensitive dramas about young people and their burgeoning sexuality. When she meets tall, confident Anja (Kaya Wilkins), Thelma by comparison seems vulnerable and innocent. They first encounter one another in the school library, where Thelma has a sudden seizure as birds crash into the building’s huge floor-to-ceiling windows.

Later, Thelma puts on makeup and heads to a bar where she knows Anja will be with her friends, but she nearly leaves without even speaking to her crush. While Thelma sits drinking a soda, Anja’s friends interrogate her about her faith and mock the very concept of religion. Yet Thelma appears to be the one in control, even when she doesn’t realize it. Asleep in bed that night, she sends out what appears to be a telepathic command to Anja, who wakes from her own slumber and is compelled to walk to Thelma’s dorm. Thelma can’t even bring herself to touch Anja yet, but Anja has already fallen under Thelma’s powerful spell. But who is corrupting whom?

Trier subverts expectations of both coming-of-age dramas and sci-fi thrillers, keeping viewers undecided as to whether Thelma is a victim, a perpetrator, or both. Although the movie largely withholds exposition for its first half, it’s also not the kind of arthouse genre film that never clues the audience in. By the end, it’s clear what Thelma can do and what her parents knew; periodic flashbacks featuring Thelma’s baby brother build to a devastating climax.

Trier’s visual style is meticulous and elaborate, with shots carefully framed to reflect the characters’ emotional states. Thelma’s most powerful moment unfolds when Anja and her mother take Thelma with them to watch an avant-garde dance performance. As Anja slowly caresses Thelma’s leg, Trier cuts between the movements of the dancers, that of Anja’s hand, Thelma’s anguished expression, and a light fixture beginning to sway high above. Tension escalates on all fronts, becoming too much for either Thelma or the film’s audience to bear.

Thelma may not have a Professor X to help her harness her powers for good, but she also doesn’t descend completely into violence. The character in that way suggests without fully mirroring Carrie White, another devout teenager whose repression masked inexplicable telekinetic abilities. Thelma remains a young woman in search for her true self, even if those explorations carry stranger, more serious consequences than typical youthful indiscretions.

Thelma is streaming for free on Tubi in the U.S.

More like this
Entertainment
7.5.2022 11:00 AM
You need to watch Christopher Nolan's most divisive superhero movie on Netflix ASAP
By David Grossman
Culture
6.28.2022 11:00 AM
5 years ago, the director of Parasite made his most unsettling sci-fi movie
By Allyson Johnson
Culture
7.3.2022 11:30 AM
15 years ago, Michael Bay made the most overrated sci-fi movie of the century
By Andrea Thompson
Related Tags
Share: