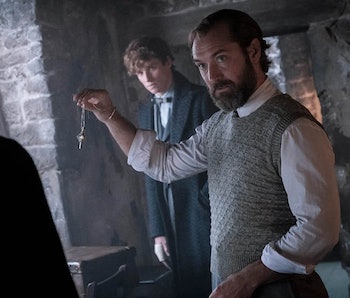 The Secrets of Dumbledore, the third film in a planned five-movie Fantastic Beasts franchise, deals less with the creatures its name promises and more with a potential fictitious genocide that awkwardly overshadows the lead-up to the real-life Holocaust.

Its plot is haunted by the realities of our non-magic world in the 1930s, which makes it increasingly more difficult to escape into its world full of witches and sorcerers. But the problems with Fantastic Beasts extend far beyond its plodding and shallow narrative.

The franchise has been cursed by the author and creator of the billion-dollar Harry Potter empire, J.K. Rowling, whose frequent anti-trans outbursts on social media have soured whatever enchantments could have been derived from Fantastic Beasts. In an attempt to calm down LGBTQ+ fans and allies who called for boycotts of the Eddie Redmayne-fronted franchise, the third movie promised to include a romantic relationship between Albus Dumbledore (Jude Law) and Gellert Grindelwald (Mads Mikkelsen).

Harry Potter introduced Dumbledore in his later years as Hogwarts’ powerful headmaster with a glorious flowing white beard (as portrayed first by Richard Harris and later Michael Gambon). Offscreen and off-page, Dumbledore was identified as gay by Rowling during a 2007 book tour event at New York City’s Carnegie Hall.

Since then, fans have anticipated Dumbledore’s sexuality being formally incorporated into the Wizarding World. Per early reviews by critics, The Secrets of Dumbledore delivers on that promise in both body language (though no explicit kissing or touching) and in two lines that amount to about six seconds of dialogue: “I was in love with you” and “the summer Gellert and I fell in love.”

However, that promise was only kept in countries that allow for “liberal” themes in their media.

Sticking Dumbledore back in the closet

In a statement to The Hollywood Reporter, Warner Bros. confirmed that the studio cut the lines affirming Dumbledore and Grindelwald as past lovers to appease the Chinese government and make the film more marketable there.

“As a studio, we’re committed to safeguarding the integrity of every film we release, and that extends to circumstances that necessitate making nuanced cuts in order to respond sensitively to a variety of in-market factors,” a Warner Bros. spokesperson said in a statement to the entertainment trade. Per the spokesperson, Warner Bros. accepted the censorship to comply with local requirements so that audiences in China have the opportunity to experience it. The spokesperson also noted that “the spirit of the film remains intact.”

This isn’t the first time studios have snipped their film reels to make them palatable for conservative countries. The censorship organization PEN America published a report in 2020 that indicated Hollywood bosses are increasingly willing to make such cuts to not lose access to China’s colossal market. Doctor Strange, for example, cast Tilda Swinton as the Ancient One, a canon Tibetan character, to avoid being banned in China.

Behind the U.S., China holds the world's second-largest box office market, and Fantastic Beasts 3 has performed well there, garnering the top slot at the box office during its premiere weekend. Nevertheless, the decision to censor Fantastic Beasts feels like a betrayal of the values the Wizarding World supposedly stands for, with many fans disappointed by the studio’s actions.

How will this affect Fantastic Beasts 4 and 5?

The second installment of Fantastic Beasts not only nosedived at the box office compared to its first film, but it also tanked with critics and casual viewers alike. It had a slew of negative reviews and bad publicity surrounding Rowling and former Grindelwald star Johnny Depp, who was accused (and later confirmed) of perpetrating domestic violence during his marriage with Amber Heard. And yet, plans for Fantastic Beasts 3 somehow moved forward.

Warner Bros. has reportedly pumped the brakes on Fantastic Beasts 4 and 5 and will decide whether the movie series will continue based on its performance at the box office. But if the last two films were to get the green light, will fans be ready to forgive the censorship it took to get there?

Harry Potter’s themes of finding family, acceptance, and the otherworldly force of love — along with exploring the binary between good and evil and the power of choice — have all been tarnished by Rowling’s overt hatred and fear of trans women. Even the most loyal, cosplaying Wizarding World fans have turned their backs on not only the original books and films but also Fantastic Beasts, the Harry Potter and the Cursed Child play, and the forthcoming Hogwarts Legacy game.

Any attempts made by The Secrets of Dumbledore director David Yates and screenwriters Rowling and Steve Kloves to sweep the scandal under the rug and convince fans that the franchise is tolerant of all are rendered futile by not standing up to censorship and homophobia. The decision to censor the movie in some countries reveals that Warner Bros. is only invested in milking Rowling’s IP for profit. It is less interested in making genuine attempts at repairing its relationship and reputation with the LGBTQ+ community and allies.

As more Potterheads turn their back on the bespectacled boy’s universe that started it all, things are looking grim for the future of Fantastic Beasts and the survivability of the Wizarding World.