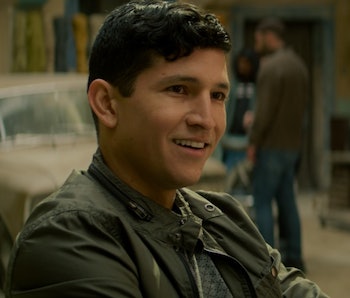 It’s a bird, it’s a plane, it’s… Captain America? It’s no secret that The Falcon and the Winter Soldier is setting Sam Wilson (Anthony Mackie) up to officially take up the mantle of Captain America. But what does that mean for the role of the Falcon?

Well, it may be time for new feathers.

If Marvel Comics’ history is any indication, the Falcon stands a strong chance to exist beyond Sam Wilson. In fact, the next character to take up the wings may have already been established in the premiere of The Falcon and the Winter Soldier. Spoilers for Episode 1 ahead.

Falcon and Winter Soldier: Who is Joaquin?

The first episode of The Falcon and the Winter Soldier, “New World Order,” introduces audiences to a young soldier named Joaquin (Danny Ramirez), who serves as Sam Wilson’s support staff while he works in liaison with the United States Air Force. Joaquin’s role in the first episode is significant, far too much so for him to simply be an ancillary character.

Not only does Joaquin express interest in Sam’s Redwing tech, he also infiltrates the Flag-Smashers, giving Wilson a heads up about the terrorist organization’s growing global influence. He even gets a fight scene of his own, and a broken orbital bone for his efforts.

Although Joaquin’s last name isn’t revealed in this episode, all signs point to the character being the MCU’s take on Marvel Comics hero Joaquin Torres, who took up the mantle of the Falcon when Sam Wilson became Captain America, and went on to serve as his partner for a time.

While WandaVision may have made some audiences leery about too much theorizing, Joaquin Torres feels like a natural fit for the conversations that showrunner Malcolm Spellman is aiming to create on The Falcon and the Winter Soldier.

A Mexican immigrant who grew up in Arizona, Joaquin ran afoul of Proud Boys equivalent Sons of the Serpent while leaving food and water for Mexican immigrants crossing the border. Rounded up alongside a number of refugees, Joaquin was handed off to the mad scientist with a bad haircut, Karl Malus, who experimented on immigrants in order to create human-animal hybrids.

At the behest of Joaquin’s grandmother, Sam Wilson investigated Joaquin’s disappearance and managed to save him from Malus, though not before Joaquin had been permanently mutated.

Possessing avian senses, an expanded range of vision, a healing factor, natural wings, and the ability to communicate with birds, Joaquin joined Sam Wilson in his fight against the Sons of the Serpent, and later HYDRA.

Impetuous and hot-tempered, Joaquin and Sam often clash over the best means to bring progress to America. For Sam, it means bridging the divide, but Joaquin believes in stronger methods, and zero tolerance for America’s prejudiced power players. Joaquin’s voice becomes a crucial one in Sam’s series, often serving as a devil’s advocate, but also making it clear that if Sam wants to truly be Captain America, he has to be less concerned with what white conservatives thought of him.

What Joaquin means for Falcon and Winter Soldier

Spellman establishes a number of moments of racial reflection in the first episode, and if Joaquin turns out to be a major role in the series, then expect those themes to come into even greater focus.

Should Joaquin take up the mantle of the Falcon in the series, it will presumably be near the end. But whenever he does — if he does — he’ll emerge as the MCU’s first Latinx superhero who is coded as such.

Inclusivity is increasingly coming into focus at Marvel Studios. Should a new Falcon hit the screen, he will join upcoming Latinx superheroes Miss America (Xochitl Gomez) and Moon Knight (Oscar Isaac). Ultimately this will only benefit Marvel Studios’ storytelling and what superheroes mean to us culturally as we watch them soar to new heights.

Falcon and the Winter Soldier is streaming now on Disney+.