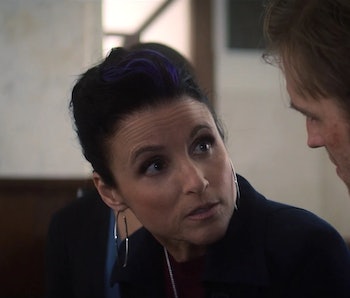 Julia Louis-Dreyfus’ Marvel debut as Contessa Valentina Allegra de Fontaine in The Falcon and the Winter Soldier threw the audience for a loop, and not just because of the sheer volume of her names. As it turns out, Marvel fans were right to be wary, based on revelations from a behind-the-scenes documentary all about Falcon and Winter Soldier.

Agent of SHADE — Valentina’s entrance, from the long coat to the slow pan up from her boots upward, is extremely reminiscent of Nick Fury’s entrance more than a decade ago in Iron Man. She confronts John Walker and tells him, head-on, what she claims nobody else is brave enough to say — he was right to kill the Flag-Smasher who killed Lemar, and if she were in his place, she would have done the same thing.

Val has a skill for related to people and getting them on her side. The fan consensus seemed to be she was recruiting powerful (but vulnerable) people for some sort of team-up. That theory was only confirmed in the behind-the scenes Marvel Studios Assembled documentary centered around Falcon and the Winter Soldier. Speaking about Val, co-executive producer Zoie Nagelhout brought up the Nick Fury of it all, saying: “We needed a character to be this sort of ‘Nick Fury but shady’ type to enter John’s world.”

“Nick Fury but shady” is the perfect way to sum up Contessa Valentina’s aesthetic, and now we know it describes her purpose as well. However, this begs the question: if Valentina is a shady Nick Fury, what is the shady Avengers initiative?

There are a lot of theories about this. Val says the super-soldier serum makes John “very, very, valuable to certain people,” so she may not necessarily be the leader of whatever team she is assembling, even as John’s future as the U.S. Agent is clearly just beginning.

A line Julia Louis-Dreyfus says in the documentary clarifies (somewhat) her intentions:

“Whether she’s a good guy or a bad guy remains to be seen, I think. She’s sort of living in a gray zone. I like the idea of a female mastermind.”

So while Val exists in a murky place on the good to evil spectrum, she’s definitely got an agenda in mind.

The Inverse Analysis — This new information seems to align Val with the Thunderbolts, a squad of villains who reinvent themselves into new, superheroic identities, much like John Walker did by adopting the name U.S. Agent. These heroes, originally assembled by Baron Zemo, posed as “heroes” to establish trust with the public, something John Walker needs a lot of currently.

But who else would join this new league of anti-heroes? Will Zemo get involved? Perhaps Agatha Harkness could escape Westview and join up? Appearing to be an ally is a talent of hers, after all.

Whether she’s recruiting the Thunderbolts or just a general League of Evil, Contessa Valentina Allegra de Fontaine is officially a shady Nick Fury — a dangerous prospect, considering even the real Nick Fury can be kind of shady. So get used to that purple streaked coif, Marvel fans — because we won’t be rid of it or Val any time soon.

Marvel Studios Assembled: The Falcon and the Winter Soldier is now streaming on Disney+.