“You know what they did to me for being a hero?” 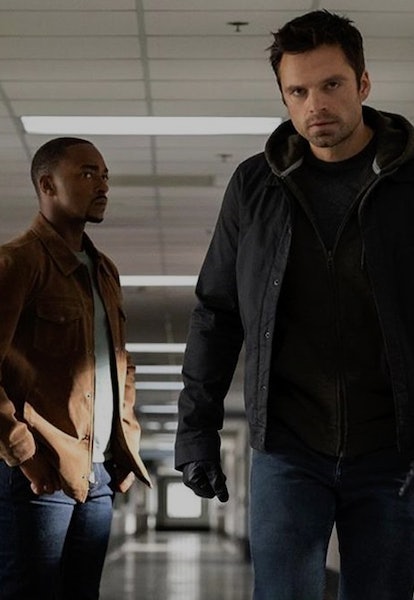 In the Marvel Cinematic Universe, heroes are easy to identify.

In the real world, heroes are a lot harder to find.

Sure, they get the occasional movies about them. But there are no hard and fast rules. In fact, the institution probably most lauded by Marvel is also one under constant scrutiny in the real world — a fact finally reckoned with in Falcon and the Winter Soldier.

The military in Marvel’s past

I remember exactly where I was when I saw Iron Man for the first time.

At 13, I was finally allowed to watch the PG-13 film. I was living with my family in Stuttgart, Germany, where my dad was working for the Army after retiring from the Navy. Our only connection to American culture was the American Forces Network, a series of military-run channels available to American service members worldwide.

So when Iron Man started, it wasn’t that much of a shock to see Tony Stark palling around with soldiers in Afghanistan, taking selfies, and cracking jokes about peace signs. It didn’t seem that different from the public service announcements that took the place of commercials — just further reinforcement that those who sign on to serve their country are living a rarified life.

The reality was far from what I saw on AFN and in Iron Man.

The best example of the portrayal of the military in the MCU is, of course, Captain America. Captain America canonically is used as a propaganda tool to get Americans behind the war effort. He’s just as much of a super-publicist as a super-soldier. He’s seen as “worthy” of his superpowers because he does his duty and signs up to fight alongside men twice his size. He’s what every soldier aspires to be, and what every draft-entering teenage boy was expected to be like.

This glorification wasn’t just limited to the story within the Marvel Cinematic Universe. The U.S. military actively assisted in all three Iron Man films and Captain Marvel. The Marvel Comics titles aren’t exempt from mixing with their real-life counterparts, either. In 2017, Marvel had to cancel a planned comics event tying in-universe superpowers with defense industry powerhouse Northrop Grumman. It seems like the more fantastical the Marvel heroes are in comparison with the real-life military, the better.

The military in Marvel Phase 4

In a post-Blip MCU, trauma is everywhere you turn.

On a social level, it changed the entire landscape for growing up, as seen in Spider-Man: Far From Home. On a personal level, it shattered Wanda Maximoff’s life so much, she had to create her own as a means of survival in WandaVision. In Falcon and the Winter Soldier, we see the systematic oppression trauma not only due to the Blip but also from pre-existing issues facing veterans.

On March 18, 2021, the day before the premiere of Falcon and the Winter Soldier, the Bureau of Labor Statistics released a report stating the unemployment rate among veterans who served in the years since September 2001 rose to 7.3% in 2020. Veterans will serve their country for years in very distinct roles only to not find a job once they leave the service. Just as Sam feels betrayed by the bank loan rejection, many veterans feel betrayed by the job market.

Then, there are the lasting prices veterans pay. When Bucky wakes up from a nightmare-filled night of sleeping on the floor, it looks like just a sly reference to an earlier conversation between Steve and Sam about finding comfort after returning from deployment. But paired with the nightmares (or, more accurately, flashbacks) and his therapy, it’s obvious this is actually a sign of PTSD. People struggling with trauma often sleep on the floor to allow themselves to be more vigilant.

The entire Isaiah Bradley scene serves as a critical moment for Bucky and Sam. Suddenly, the government that their lives were built around defending is revealed in many ways to have turned its back on them for one reason or another, be it systemic racism or unassisted rage issues due to trauma. The government has always backed superheroes. The closest that ever came to changing was in Captain America: Civil War, where it merely served as a divisive issue. A charitable read is the government wanted to back superheroes even more.

In WandaVision, the government isn’t the enemy; Agent Hayward is. In Falcon and the Winter Soldier, there is no single figurehead making all these bad decisions. It’s the government as a whole that decided to pull Sam’s donated shield from history and thrust it back into battle with John Walker, sullying Steve Rogers’ good name in the process.

The Flag Smashers, thus far the main villains of Falcon and the Winter Soldier, see this glorification of military action, the glorification of superheroes as patriotic symbols, and the existence of government itself as a threat to humanity as they know it. While John Walker brags about the many “resources” allotted to him by the government, Karli Morgenthau complains that those who left in the Blip are being treated better than those who were left behind.

While Sam and Bucky deal with issues with those in power, they are simultaneously fighting against those in the same position. The only difference is how they intend to fix things.

For the Flag Smashers, they are literally seizing the means of super-heroic production, creating an entire army of super-soldiers. Their goal is not to fix the government but to abolish it altogether.

Bucky and Sam’s plan isn’t clear as of yet, but it will probably involve working from the inside, exposing the fact that Steve Rogers isn’t replaceable — except, perhaps, by his chosen successor. Clearly, that’s the method that would prove the most successful, especially since it won’t involve demolishing the very political structures that hang in a delicate balance already.

The military and Marvel’s future

It’s an inescapable fact that superheroes and the military will always be linked.

As long as Captain America remains in canon, American patriotism in the MCU will be tied to the Avengers. However, what can change is the way the military is shown. It’s not disrespectful to show how military service can mess up veterans’ mental health or how lower-income high schoolers are coaxed into enlisting with the promise of escaping student debt. In fact, it’s important.

I’ve spent my life surrounded by two parents who served in the Navy and spent time recruiting. They point to Top Gun and other military films as showing an idyllic life that often pales in comparison to true service. That, combined with massive pressure on recruiters to meet quotas no matter what, makes for a toxic cycle of young Americans getting roped into a life they had completely different expectations for.

The MCU is just the next step in this cycle, proving — intentionally or not — that you too can be a superhero if you enlist. Nick Fury didn’t just assemble a mighty team of superheroes. He brought together a collective group of Uncle Sams who symbolically proved America is worth defending.

The Falcon and the Winter Soldier is hopefully the first step in a long process of undoing the decade of Marvel mythology surrounding military life — or, at least, counterbalancing it by showing the darker sides of service.