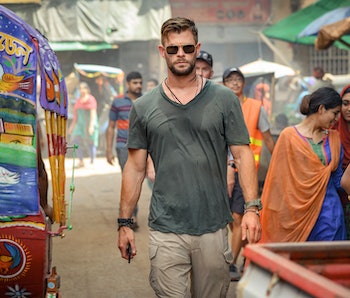 It was one of the surprise Netflix hits of the pandemic. Extraction, the unexpected action movie starring Chris Hemsworth and produced by the Russo Brothers, became one of the biggest things on Netflix when it dropped in April 2020. The streaming giant boasted on Twitter that "90 million households" projected to stream the movie in its first four weeks.

With so much attention on the movie, it's inevitable that a sequel would already be in development. Here's everything we know so far about Extraction 2.

Wait, what is Extraction?

Extraction is a 2020 action-thriller starring Chris Hemsworth (best known for his role as Thor in the Marvel franchise). In Extraction, Hemsworth trades his mighty hammer for a rifle to become Tyler Rake, an Australian mercenary hired to rescue the kidnapped son of an Indian drug lord. The movie landed on the streaming service on April 24, 2020, and was one of the most popular films on the service last year, according to Netflix's metrics.

Is there an Extraction 2?

Yes! A sequel to Extraction was confirmed by Deadline in May 2020. Russo was hired to pen the film, with both Hemsworth and director Chris Hargrave set to return.

“The deal is closed for me to write Extraction 2, and we are in the formative stages of what the story can be,” Joe Russo told Deadline. “We’re not committing yet to whether that story goes forward, or backward in time. We left a big loose ending that leaves question marks for the audience.”

What story will Extraction 2 explore?

It is unknown at the moment what story Extraction 2 will tell.

The film could be a continuation of Tyler Rake's guardianship over Ovi (played by Indian teen actor Rudhraksh Jaiswal). Perhaps Tyler is hired for a new job to extract a new subject in a new location, which would be the easy recipe for an evergreen film franchise.

Some speculate that Tyler Rake actually died, despite the ambiguity of the ending. In fact, Rake's death was the original, intended ending of Extraction from its own director, Sam Hargrave.

“We had a version of the movie [where he died], and we tested it a lot, and it was not surprising that a lot of people wanted the character to live, and some people wanted him to die," Hargrave told Collider. "People were torn; it was almost down the middle. We want to appeal to as many people as possible without compromising the integrity of the story. And so, we think a pretty good compromise is to make an ambiguous ending."

At the end of Extraction, Ovi is safe at home thanks to the actions of Tyler Rake, who was last seen severely injured and falling off a bridge. When Ovi is at his swimming pool, he comes up for air only to see an obscured figure watching him. It's unknown exactly who that person is except that they're a tall Caucasian male, which heavily implies that it's Tyler and he survived. Yet the movie never confirms who it actually is that's there.

Hargrave added, "If you feel like you love Tyler Rake, and you love Chris Hemsworth, and you want a sequel, and you’re like ‘There’s no way, you can’t kill him!’ then that’s Tyler Rake standing there looking at you. So we kind of purposefully did not pull focus to the character standing there.”

Will Chris Hemsworth return for Extraction 2?

Yes! In May 2020, it was confirmed that Hemsworth would be reprising Tyler Rake for Extraction 2.

There is currently no premiere date for Extraction 2. The movie was originally slated to film in Australia starting in September 2021, though complications with the Covid-19 pandemic have allegedly relocated production to Prague.

Where can I watch the trailer for Extraction 2?

The teaser trailer for Extraction 2 debuted at Netflix’s “Tudum” event in September 2021. It recaps the final moments of Tyler Rake from the first film, taking a bullet to the neck before falling into the river. While lying underwater, he opens his eyes, and “#RakeisBack” shows onscreen. You can watch the teaser below.

Extraction is currently streaming on Netflix.

More like this
Entertainment
7 hours ago
You need to watch the most underrated superhero franchise before it leaves Netflix this month
By Dais Johnston
Culture
4.30.2022 10:00 AM
7 stellar sci-fi shows and movies coming to Netflix in May 2022
By Bryan Lawver
Entertainment
5.2.2022 11:30 AM
You need to watch Spielberg's most underrated sci-fi movie on Netflix ASAP
By David Grossman