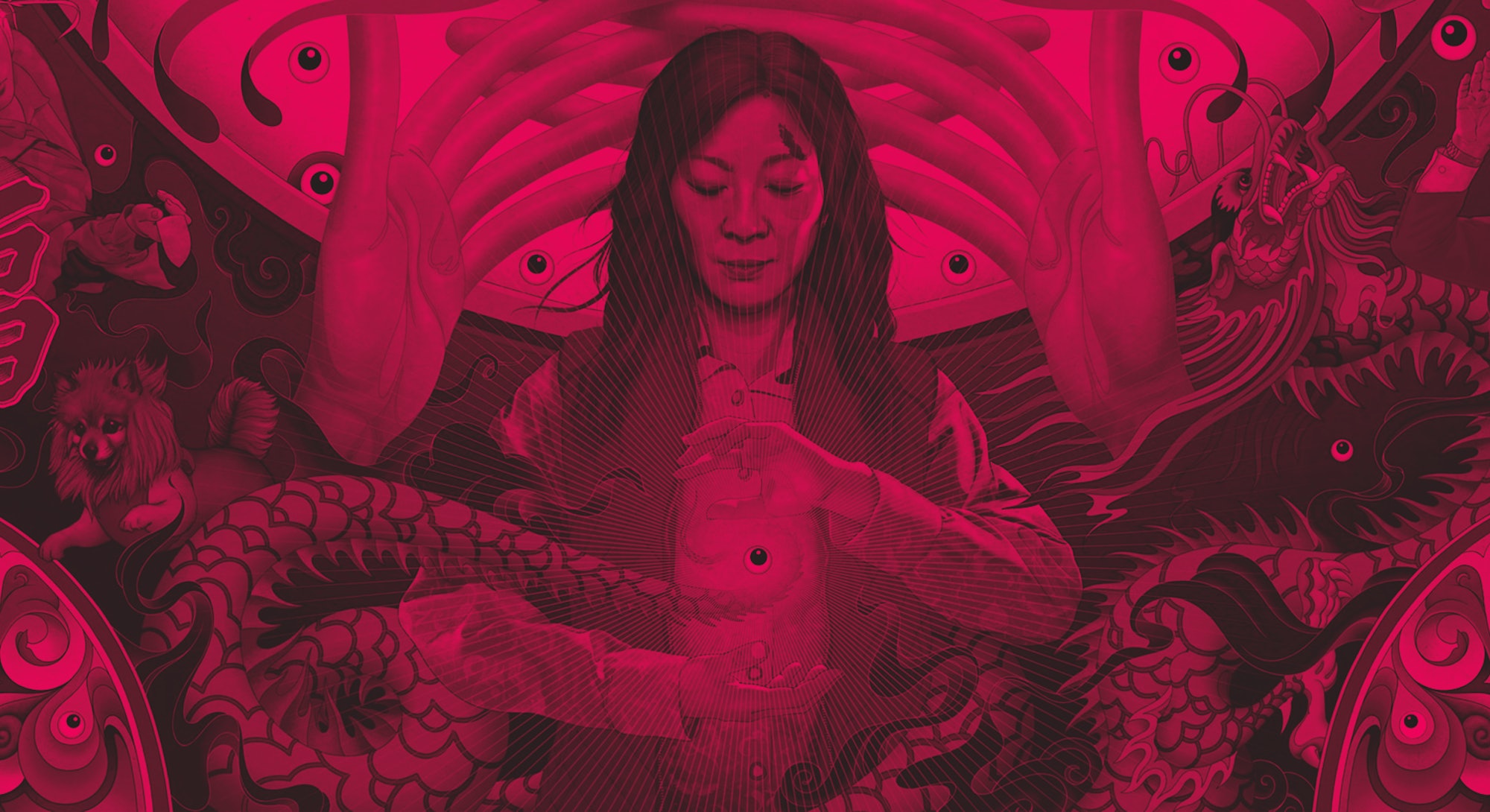 Despite all of its multiversal madness, Everything Everywhere All At Once feels like home.

I was swept up by rapid-fire Chinglish (across Mandarin and Cantonese), pronoun mix-ups in English (they’re homophones in Chinese), the repeatedly muttered 神经病 (shen jing bing) by the scattered matriarch of the house, Evelyn. Waymond’s loose, striped polo looks just like my dad’s, and Evelyn’s vest (emblazoned with “Punk”) and floral shirt are of Accidental Chinese Hipsters lore via Los Angeles’ Chinatown, where I spent many weekends wandering as a kid.

There are also the dazzling homages to wuxia, Wong Kar-wai, and Beijing opera, with an all-star cast of cinema legends. That includes Michelle Yeoh, whose martial arts and action career precede her Shang Chi and Crazy Rich Asians fame, Ke Huy Quan’s return to the screen after working behind the camera with the likes of Wong Kar Wai and Corey Yuen in the years since Indiana Jones, and James Hong, who has over 650 film and television credits.

But as a diaspora kid in the U.S., the domestic and familial details are what make Everything Everywhere feel so delightfully Chinese — and queer — to me. These little details are such touchstones for fellow Asian diaspora and immigrant experiences, too: three generations at home, stumbling in mother tongues, a kitchen table covered in paperwork, glossing over a queer child’s partner by referring to them as “friend,” and the disappointment of being born a daughter.

Everything Everywhere’s directors Daniels describe the multiverse as a metaphor for modern life and the immigrant experience. It reflects how science fiction can be a tool of empowerment for people who find themselves at the margins — via imagination and critical attention to how the present and past can inform their sense of self.

What grounds the film’s alternate worlds is its dedication to portraying a Chinese American family in the present and utilizing the multiverse to explore the breadth of their desires and dreams — unrealized or not.

At its core, Everything Everywhere expands the sense of possibility in what Sino, Asian diaspora, immigrant, and queer futures could be. We all stand to take so much away from a story about intergenerational healing, women who save themselves and one another, and men whose masculinities are grounded in vulnerability and softness. We also get to witness queer love between generations and the perennial struggle to reach past differences and grasp for moments of connection with your parents — and the world at large.

Everything Everywhere begins with Evelyn Wang (Yeoh) trying to make sense of a pile of receipts amid a tax audit while running the family laundromat. She’s sort of, not-quite paying attention to her husband, Waymond (Quan), who is trying to serve her divorce papers. Nor can Evelyn focus on her disappointed father, Gong Gong (Hong), and her estranged daughter, Joy (Stephanie Hsu), to whom she struggles to apologize and instead comments about her weight.

Even later, when her alternate universe husband (“alpha Waymond”) plays back the branching paths of her life and implores her to use universe-jumping technology to save the world, Evelyn’s mind is still on her taxes. Namely, she’s focused on the overzealous IRS employee, Deirdre (Jamie Lee Curtis), glowering at her from across the table.

Soon enough, Evelyn’s fighting her way through a Simi Valley IRS building to come up against the most powerful being in the multiverse, none other than her daughter from an alternate universe, Jobu Tupaki. Jobu’s chaotic nihilism leaves death and destruction in her wake. She is the cause of all that feels off-kilter in the world. Evelyn resolves to defeat this omniscient, omnipresent entity to save her daughter.

Through every twist and turn, subtle glints of injustice, in both institutional and interpersonal contexts, slip by as quickly as they occur. A creepy laundromat customer remarks, “I thought you people were good at math,” after a machine eats his twenty-dollar bill.

Of all the questionable tax activities to focus on, Deirdre seems to target people like Evelyn to audit and doesn’t try to make her language any more accessible even when she recognizes the Wangs’ daughter isn’t there to translate. Deidre does the thing that anyone who has facilitated communication for a loved one has witnessed: enunciating, raising, and slowing down her voice with an alienating impatience.

For all the ways these moments chip away at their sense of agency in the world, they also foreground the power each character taps into when accessing their alternate lives — their “would-haves” and “could-haves.”

In a moment that’s as heartbreaking as it is comedic, Evelyn proclaims breathlessly that she wants her husband to see how beautiful her life could have been without him. Waymond, who is viewed as hapless and weak in his softness, asserts that his kindness and optimism are strengths. They are strategic to survival and the very things Evelyn learns from to save herself, her family, and the world… with a whole lot of googly eyes.

The origin story of the movie’s antagonist Jobu Tupaki, Joy’s villain alter-ego, shares an easy parallel to parent-child relationships centered around expectation. In the alpha-verse, Jobu’s mother (alpha-Evelyn) pushed her to a breaking point while training to verse-jump, fracturing Jobu’s mind. Jobu now spends her days traversing the multiverse and leaving countless Evelyns dead, all in an effort to find a version of her mother who understands what she experiences.

To Evelyn, who has taken her deferred dreams as an immigrant and pinned them all upon her daughter, it’s easier to imagine that another powerful, omnipresent being is controlling her daughter. But she eventually accepts that she is the source of her daughter’s pain and comes to terms with the fact that her daughter is her own person, who has dropped out of college and does indeed have a girlfriend, tattoos, and is struggling with depression.

This is similar to framing in China — where gay marriage is neither legalized nor criminalized —that the idea of LGBTQ equality is borne of Western ideology rather than the personhood of those advocating for themselves.

“The humanity of the characters is inextricable from their queerness.”

The Daniels have stated their commitment to keeping gay storylines in distribution in China, where Dumbledore’s relationship with Grindelwald vanishes, and Chloe Zhao, who wanted to preserve Phastos' sexuality in Eternals, saw that the movie never opened in China. To compromise for the sake of distribution would be antithetical to the movie’s theme of refusing compartmentalization and conditional acceptance. Even if there are strongly disapproving forces on the other end, the humanity of the characters is inextricable from their queerness and, thus, from the film.

Witnessing Evelyn and Joy adeptly kick butt is cathartic and gratifying, alongside seeing their vulnerabilities in the difficult, emotional conversations they have to heal their strained relationship. It leads to Evelyn’s confrontation with her father, who more-or-less disowned her when she married Waymond.

“How could you have let go so easily?” she asks him before realizing she no longer needs his approval. Similarly, Alpha-universe Gong Gong was ready to kill Joy/Jobu because, to him, reconciliation was unimaginable. Seeing Evelyn break the cycle of intergenerational hurt to stand up for her daughter and herself felt miraculous to me. And I imagine it felt the same to anyone else who has experienced parents reenacting similar patterns of hurt — or perhaps, recognize their parents in their own actions.

A sci-fi form of healing

The parent-child relationships surrounding Evelyn are fraught with conflict, but working through them is what enables her growth and ability to save the day. With that said, Everything Everywhere may seem sentimental, but the film offers a more complex understanding of human stories at interpersonal and societal levels.

For example, Waymond says his gentleness and kindness are strategic and necessary to survival; they are his strengths. This echoes Adrienne Maree-Brown, who wrote "All Organizing is Science Fiction," and says that visionary fiction is “realistic and hard, but hopeful,” and Dr. Angela Davis, who says of political protest: “We can’t do anything without optimism.”

In the face of a world that encroaches upon both our agency and connectedness — giving more reasons to lean into the comfort of nihilism — Evelyn has to reach toward love and kindness. When an alternate-world Deirdre flies toward her in a slow-motion sumo wrestler-kick, she has to say “I love you” and mean it. In another world where everyone has hotdogs for fingers, Evelyn, for all her gripes about Joy’s girlfriend, finds herself romantically entangled with none other than Deirdre.

“I saw myself in the relationships of the film, and I saw what could be.”

After realizing she must fight with kindness like Waymond, Evelyn sets off a series of events where she displays love for each of her adversaries through something she’s learned about them from other alternate worlds.

A mother reaches across worlds to hold onto her daughter and rescue her from the swirling black hole of an everything bagel. In another universe, their embrace is a supercut of two colliding planets. Through the layers of elaborate, wondrous, often comical science-fiction premises, I saw myself in the relationships of the film, and I saw what could be.

The film made me imagine worlds and futures where we could heal painful, strained relationships with our mothers or other loved ones. Is this not futurism in itself? A future where we can heal?

I watched Everything Everywhere at its San Francisco premiere with an audience filled with members of the Asian diaspora. Amid our long moment in Covid, Sinophobia, and anti-Asian violence (on a bedrock of a history of media and legislation that once served to extract underpaid labor, like building national railroad infrastructure and running laundromats, then restaurants, and continues to portray us as weak and submissive), the experience was special, bittersweet, and yes, healing.

At the time of the premiere, it had just been the one-year anniversary of the six women who died in an Atlanta spa. The deaths of Christina Yuna Lee, Michelle Go, and many others, were at the top of our minds. They could have been any one of us.

But in a crowd of strangers, Everything Everywhere enveloped us with the warmth of familiarity. In a refreshing departure from both orientalism and erasure, it reminded us that we're here, right now, and can dream about everything we wanted to be everywhere else, too.

Everything Everywhere All at Once is now playing in theaters.