You need to watch the best dystopian movie on Netflix ASAP

“Stick to the script” 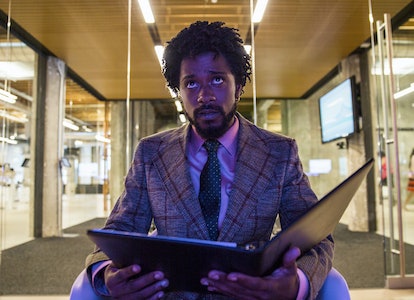 Satire is becoming a more difficult genre to master. In a world where the life cycle of a meme is sometimes hours, not days or weeks, nailing down a part of the culture before it changes is like trying to keep a wave on the shore: There’s always another wave behind it.

But while fashions and cultures may come and go, a few things are eternal in American culture — greed and capitalism. This critically acclaimed 2018 film, finally streaming on Netflix, manages to create a timeless satire, even if this particular dystopia gets closer to becoming truth.

Sorry to Bother You is a 2018 black comedy written and directed by Boots Riley. It stars Lakeith Stanfield as Cassius “Cash” Green, a down-on-his-luck guy who makes it big as a telemarketer and accidentally gets tangled up in a labor dispute, an Illuminati-like conspiracy, and a sci-fi twist that will stay with you for days.

Cash finds success as a telemarketer thanks to a tip to use his “white voice,” represented by an overdub from one of the whitest men on Earth, David Cross. This voice gets him promoted to “power caller” status, a rank where the goods being bought and sold are beyond even the sellers’ comprehension.

Meanwhile, Cash’s world is eerily similar to ours, with some key exceptions. “WorryFree” becomes a go-to solution for those in financial binds, touting its lifetime labor contract as guaranteed job security, but it’s much more like legalized slavery. Cash’s girlfriend, performance artist Detroit (Tessa Thompson), works against the WorryFree movement. She initially supports Cash’s rise at work but breaks up with him when she realizes how much the job has changed him.

After unintentionally becoming a meme while crossing a picket line on his way to work, he realizes his job isn’t all it’s cracked up to be, too. This is only underlined by a party invite from WorryFree CEO Steve Lift (Armie Hammer, in a role as devious as those rumors). There, Cash is faced with the true purpose of WorryFree’s “labor solutions.”

I won’t reveal the twist here, but it emphasizes classism, racism, and general capitalistic oppression, all rendered in an informational stop-motion video depicting a grim future for WorryFree and the future of work as we know it. Riley crafts a last act that feels more at home in a midcentury sci-fi short story than a late 2010s indie darling.

Considered individually, the parts of Sorry to Bother You feel like the fundamentals of a comedy movie. Even the title is in reference not only to overly polite telemarketers but the unfortunate message the film carries. Yeah, the anti-capitalist, pro-union message may be disheartening, but it’s delivered in a way that is so entertaining you won’t be bothered at all. You’ll be delighted.

Sorry to Bother You is now streaming on Netflix.