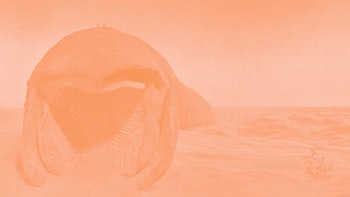 Ride the worm, Paul! In Dune Part 1, the sandworms of Arrakis don’t actually do much despite their monstrous presence. But they’re coming back in a big way for Dune Part 2. Because the next film will finish adapting the rest of Frank Herbert’s 1965 novel (the first film only got about halfway) we will definitely see Paul Atreides atop a sandworm. The latest casting for Dune Part 2 actually creates an interesting wrinkle in how all of that will go down. Spoilers for the novel ahead.

As reported by Deadline, Swiss actress Souheila Yacoub has been cast as Shishakli in Dune Part 2. Even hardcore book fans may not recognize this name; the Fremen character only appears on two pages of the novel. We meet Shishakli as Paul is learning how to become a Sandrider, and they’re described as “a squad leader of the Fedaykin,” meaning Shishakli reports to Stilgar (Javier Bardem).

Shishakli loans Paul a pair of “maker hooks,” which the Fremen use to grab onto the sandworms and ride them. These tools are called maker hooks because, among other names, the Fremen refer to the sandworms as the great makers. Paul is told by Shishakli that the hooks have “never failed.” And that’s pretty much it.

Like Lady Margot Fenring, the role of Shishakli looks small on the page, but the casting of a notable performer suggests that Denis Villeneuve has plans to expand the character. And like the casting of Sharon Duncan-Brewster as Liet-Kynes for Dune Part 1, the casting of Yacoub as Shishakli seems to flip the gender of the book character from male to female. In the Villeneuve version of Dune two important Fremen, Liet-Kynes and now Shishakli, have been changed to women.

If you’ve never read the book, you may not know just how important the sandworms are to the final third of Dune. In Dune Part 1, Duke Leto (Oscar Isaac) talks about cultivating “desert power,” which Paul repeats at the end of the film. Well, that power comes from the giant sandworms. Without Paul harnessing them, there’s no way the Fremen could take down the Harkonnen, recapture Arrakis, and take to the stars from there.

So it might seem like a small detail that Shishakli gives some maker hooks to Paul, and it might not seem like a huge deal that they’ll help teach Paul how to ride a worm. But because she’ll now be played by Souheila Yacoub, the moment where she teaches Timothée Chalamet how to handle the literal reigns of a sandworm could be bigger than ever. In previous adaptations of Dune, this moment hasn’t quite landed. But Villeneuve apparently has big plans for it.