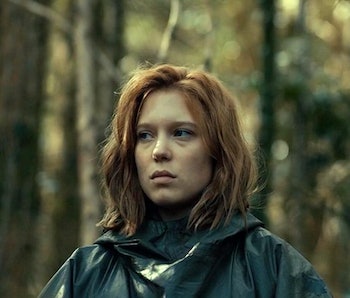 Léa Seydoux has appeared in countless critically acclaimed genre films. In 2023, she’ll appear in Dune: Part Two as Lady Margot Fenring, a character whose entire name is only mentioned twice in the original Frank Herbert novel. Reconciling Seydoux’s immense power as an actor with the fact that Lady Margot is a very minor character in Dune is tricky. Will Seydoux only have one scene in the film? Why did Denis Villeneuve cast such a big actor for such a tiny part?

The only reasonable answer is that Seydoux’s role in Dune: Part Two as Lady Margot will be expanded significantly. If true, Léa Seydoux could fix one of the novel's most underdeveloped and bizarre parts. Speculation ahead.

How Lady Margot appears in the book-version of Dune

In Frank Herbert’s novel Dune (1965), the first mention of Lady Margot comes fairly early. On page 116 (Kindle Edition), Jessica finds a note left for her by Lady Margot, which, in code, warns Jessica that some kind of internal betrayal is coming. Jessica knows Lady Margot is a fellow Bene Gesserit and the wife of Count Hasimir Fenring (a sort of Imperial lackey who hangs out in the court of Shaddam IV, who lived on Arrakis with Margot prior to the events of the novel).

So, her first “appearance” isn’t really an appearance at all. Instead, like Princess Irulan or the Emperor, Herbert introduces this character “off-screen” before we actually meet her. But, it’s not like her role expands significantly after that. In fact, we don’t actually meet Lady Fenring until much later, on page 521, at the start of what is now labeled Chapter 35. (Herbert didn’t actually use chapter numbers in the text.)

Lady Margot is hanging out on Giedi Prime — the homeworld of the awful Harkonnens — watching Feyd participate in some rowdy gladiatorial contests. She’s also on a secret mission: The Bene Gesserit have sent her to obtain Feyd’s genetic material. Yes, that means she’s meant to seduce Feyd to become impregnated with his baby.

After that ... Lady Margot’s story in the original Dune novels pretty much is over. The only appearance of Margot’s secret daughter, Marie Fenring, didn’t occur until the 2008 book Paul of Dune, written by Brian Herbert and Kevin J. Anderson. And it’s unclear if we ought to consider the Herbert-Anderson Dune books canon. Even the decidedly extra-canonical 1984 book The Dune Encyclopedia points out, “One question regarding Lady Margot remains: What became of her daughters, particularly the one sired by Feyd-Rautha Harkonnen?”

In his critiques of power structures, aristocracies, and eugenics, Frank Herbert introduces several story points in Dune about how nearly everyone is obsessed with manipulating certain genetic bloodlines.

And it’s in this detail that it seems like Denis Villeneuve could transform this character into something much more than what is on the page. In numerous interviews prior to the release of Dune: Part One, Villeneuve made it clear that one mandate for the adaptation was “to bring more femininity to the story,” partially because most of the non-male characters (like Lady Jessica or Chani) actually drive the narrative. The entire reframing of Dune’s opening, told from Chani’s perspective, is just one example of this. Rebecca Ferguson’s take on Lady Jessica is another. In fact, Dune: Part One begins with a scene not in the book at all, which focuses specifically on Jessica’s tutelage of Paul.

Villeneuve already has a track record of enhancing female roles from Dune for the film version. Lady Margot’s role in the book is so small with her story left incomplete, which presents a fascinating opportunity to do more. By casting Léa Seydoux, Villeneuve may be indicating that Dune: Part Two is going to be very, very different from the novel.

But what could that change look like? Will Lady Margot’s friendship with Lady Jessica be made into a bigger deal? Will we see Lady Margot as the true power behind Count Fenring, himself a failed Kwisatz Haderach? Will Lady Margot join forces with Princess Irulan, as they’re both royal court members? Could the storyline of her carrying Feyd’s child be radically changed?

Right now, we don’t know how Seydoux’s Lady Margot will differ from the novel, but we do know one thing: No matter what Lady Margot does in Dune: Part Two, it will be a whole lot more than she ever did on the page.