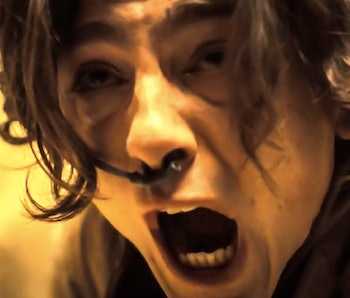 Our next, sure-to-be-spicy look at this year’s Dune is coming to theaters in a manner reminiscent of sneak peeks for one of Warner Bros.’ most groundbreaking franchises: Christopher Nolan’s Batman trilogy.

Will this new preview bring us the reckoning of Arrakis? On July 21 and July 22, new footage from Dune is expected to be screened for the public at IMAX theaters. This footage will only exist in theaters, though a new trailer will follow and debut online as well.

It’s a marketing move that immediately recalls WB’s strategies with both The Dark Knight and The Dark Knight Rises. In the case of the former, the film’s opening bank-robbery sequence (which introduced Heath Ledger’s Joker) was screened in IMAX theaters in front of I Am Legend, seven months before release. In the case of the latter, the six-minute prologue in which Tom Hardy’s Bane hijacked a plane was attached to 70mm prints of Mission: Impossible — Ghost Protocol, also seven months before the film opened.

Here’s what’s going on, how to watch the new Dune footage and when to expect the second Dune trailer. Mild trailer spoilers may follow.

On July 21 and July 22, at select IMAX theaters around the world, new Dune footage will be screened for people in those theaters. To be clear, this teaser event is open to the public, and you can find a list of participating theaters right here. (Note: Many locations are “sold out” of free tickets.)

Inverse has been able to confirm that this new footage will be screened in addition to a new trailer at the same event. The extended footage will likely not be released online, so attending one of these screenings will be your best shot at seeing it — that is, until Dune hits theaters and HBO Max in October.

Still, outside of this footage, a second Dune trailer is still coming, and it sounds like everyone will be able to see that online shortly after the screenings.

When will the second Dune trailer drop?

According to trusted Dune scoopster @SecretsofDune, on Twitter, the new Dune trailer — the second trailer for the film overall — will debut at these in-person events, but following that will hit the internet on Friday, July 23.

“The trailer will be released digitally on the 23rd according to what I know,” said the source, also noting that original Dune author Frank Herbert’s son, Brian Herbert, will be making some kind of announcement the following day.

It sounds like the weekend of July 24-25 could find more Dune spoilers showing up online than ever before. At the very least, expect fans and journalists who attended the screenings to dissect what they’ve seen online. (Including here on Inverse!)

As word has circulated online about this new footage, it appears that several non-American movie sources have also confirmed the overall runtime of Dune as 155 minutes. A little over two-and-a-half hours, this is slightly shorter than director Denis Villeneuve’s Blade Runner 2049, which clocked in at 173 minutes. It’s also very close to the runtime of Star Wars: The Last Jedi.

We’re not looking at a four-hour epic, which could back up rumors that the new Dune movie will have an “abrupt” ending and likely only adapt about half of Herbert’s first novel.