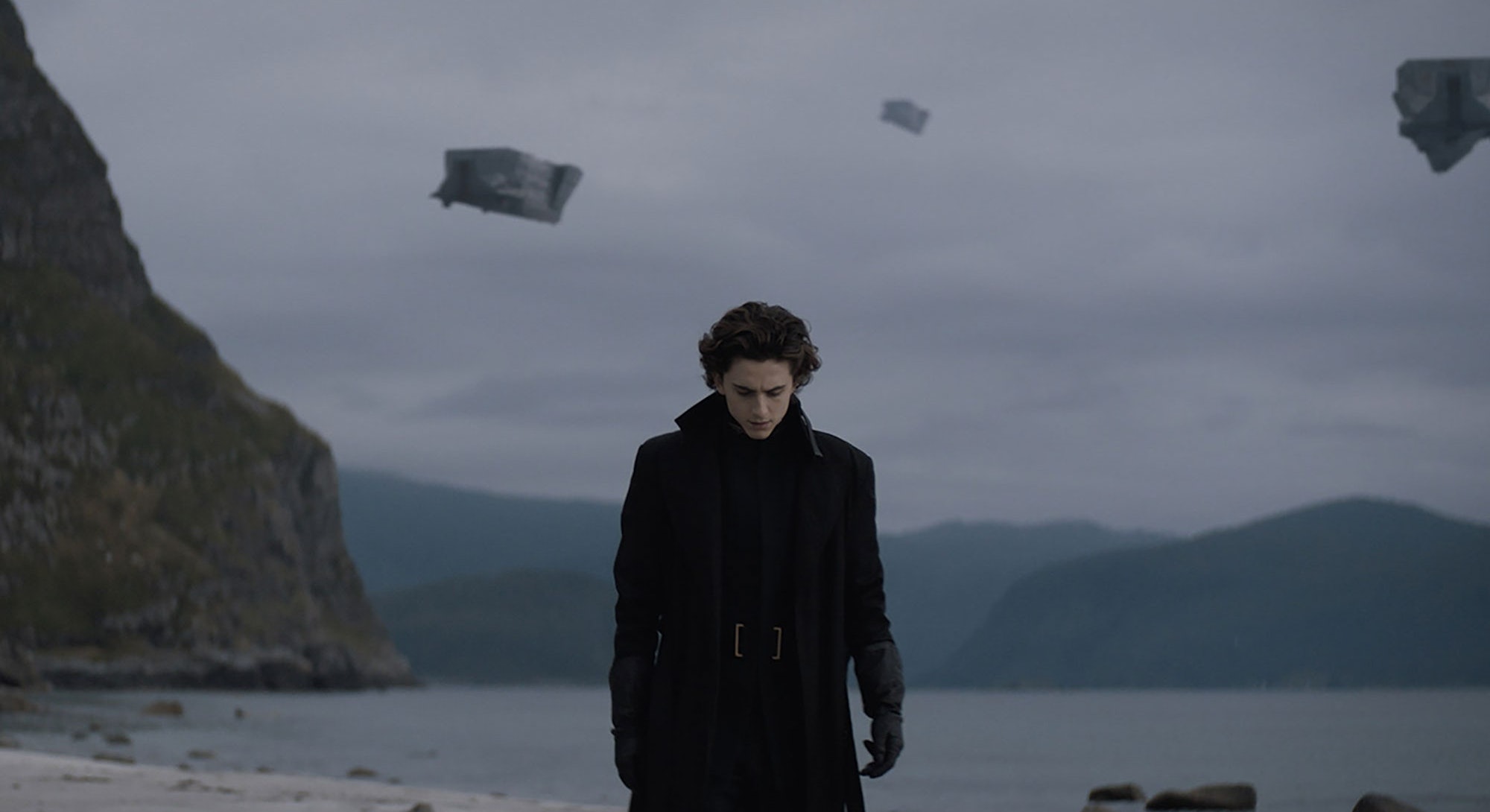 With Denis Villeneuve’s Dune postponed into next year, the eyes of the cinematic universe won’t be fixated upon the spice planet Arrakis until Oct. 1, 2021.

But fans of Frank Herbert’s seminal novel can still expand their minds and immerse themselves in the saga’s feuding royal families with a breathtaking new Dune prequel comic written by the author’s son Brian and published by BOOM! Studios.

If you’re worried about Brian Herbert’s qualifications — well, don’t be. He’s one of the biggest Dune experts around and even got a chance to visit the set of Villeneuve’s movie during filming, though he wouldn’t reveal whether any of the prequel novels he’s already written will factor into the director’s adaptation.

“This is a really big movie,” Brian Herbert tells Inverse, “a major project that will forever be considered THE definitive film adaptation of Frank Herbert’s classic novel. Fans are going to love this movie. Denis Villeneuve is the perfect director to do Dune.”

Dune: House Atreides #1 arrives on Oct. 21 and begins a stellar 12-issue series adapted and scripted by Brian Herbert and Kevin J. Anderson, who co-wrote the 1999 prequel novel of the same name based on Frank Herbert's private notes. Set in the years leading up to the 1965 Hugo and Nebula Award-winning novel Dune, this sweeping new story slingshots readers back to the desert planet where Pardot Kynes investigates Arrakis’ strange ecological secrets in remote regions.

Meanwhile, a political takeover is plotted by Emperor Elrood's son Shaddam Corrino, while far away, an eight-year-old slave named Duncan Idaho tries to escape from cruel masters and a young Leto Atreides starts his journey of destiny toward the royal throne. These three souls are drawn together, first as renegades and then as something greater, as they discover the truth that their paths will alter the very shape of history.

Inverse connected with Brian Herbert and Kevin J. Anderson to learn about how this new BOOM! comic book adaptation evolved, working within and adding to the famous Dune canon, being on the Dune movie set in Budapest, and how this prequel material might make for a fantastic Hollywood film someday.

Why is the time ripe for a Dune comic book series?

Brian Herbert: The BOOM! comics are a perfect venue to expand the fan base of the Dune universe, reaching new readers. This novel is the first of a trilogy I wrote with Kevin, leading up to the events in Dune, so it’s a perfect place for new readers to enter the series — and existing fans will enjoy it, too.

Kevin J. Anderson: I’m smiling because the people at BOOM! can tell you we’ve all been trying to make this happen for well over a decade! I read Frank Herbert’s original Dune series a long time ago and the stories conjured so many epic, vivid images in my mind. I’ve always thought that the Dune universe would be right at home in the comics world.

Can you launch us into a quick trip around the House Atreides plot?

KJA: House Atreides is the first Dune novel Brian and I published over 20 years ago. When we began exploring and expanding Frank Herbert’s great universe, we felt the best place to start was with the prequel story, the origin of so many of the familiar characters from DUNE—Duke Leto, Lady Jessica, Baron Harkonnen, the planetologist Kynes, Emperor Shaddam.

BH: Kevin’s summary is a good entry point to find out about the plot. One reader told us that we have eight storylines in the plot to this novel, though I have not checked that. In our overall plots for each novel, we like to weave multiple storylines, building up the suspense, and drawing everything together at the end.

Should fans read the new comic before reading any of the other books you wrote first?

KJA: The monthly comics of House Atreides is a visual adaptation of the plot and characters in the novel and follows the story closely. It’s two different versions, and each enhances the other. We hope that the many readers of the novel will check out the comics, and vice versa.

How has Dune changed your life?

BH: It is a big responsibility, and I take it very seriously. I am president of the company managing my father’s estate so I have extensive duties co-managing all of the Frank Herbert-related projects. In addition, I am an author, so I’m wearing two hats — business and creative — and I have to find a balance. Sometimes, when I am in the midst of writing a new novel, my emails and contracts pile up, awaiting my attention, but I have to do it that way or I would not be able to complete the writing projects.

I have just finished my half of the first draft of Dune: The Lady of Caladan, writing 70,500 words in 35 days — one chapter a day, with no excuses. Right now I’m blocking out time to take care of all of the business matters that were on hold.

How do you feel about the canon debates over your prequel and sequel books?

BH: Before Kevin and I wrote one word in the Dune universe in 1998, I spent the prior year putting together a massive Dune Concordance, which is 600 pages, single-spaced. We use that as a reference work when we are writing the novels, so we know the Dune canon very well. In addition, we both do Dune canon work on the current Dune-series movie and television projects, aided by my nephew, Byron Merritt.

The three of us know a great deal about the Dune canon. On the new novels I write with Kevin, we not only adhere to what Frank Herbert established, but we also create new works that fit into his Dune canon, and become canon themselves.

KJA: Fans can always debate a series they feel so passionate about, and we are happy that millions of readers continue to enjoy our novels even after more than two decades. When you look at the hundreds and hundreds of Amazon reviews posted, and not a single one of our 15 Dune novels has a lower average rating than four stars, that tells us what we need to know.

What are you looking forward to most with director Denis Villeneuve's big-screen Dune feature?

BH: I was very impressed by the trailer, and I was thrilled to actually be on the movie set in Budapest last year, where my wife and I watched the filming of several scenes. This is a really big movie, a major project that will forever be considered THE definitive film adaptation of Frank Herbert’s classic novel. Fans are going to love this movie. Denis Villeneuve is the perfect director to do Dune.

Will the new movie use anything from your prequel novels?

BH: This movie is called “Dune,” and is following what Frank Herbert laid out. Come on! You know we can’t reveal what is in the movie! Nice try, though.

In what ways does Dev Pramanik art enhance and support this comic prequel's plot?

BH: I was just looking at Dev’s artwork today, and I love the way he has set up the panels, to give our novel the big-scale look that it deserves. His illustrations of the various planets, cities and major buildings are spectacular, and the characters look great, with excellent details in their faces and actions. He’s the perfect artist for this project. His use of color is great.

KJA: Brian and I wrote the script for each issue, and we had a visual layout in mind as we told the story, but when I saw Dev’s artwork, I was blown away – not just the quality of the artwork itself, but the sweeping scope of his panel layouts and his visual storytelling. Wow! I couldn’t imagine a better person to bring our prequel story to life.

What has been the most fun and rewarding working on this Dune project at BOOM!?

BH: More than 20 years after we published Dune: House Atreides, the novel is coming to life in a new way. With all the images I am seeing on the pages of the new comic issues, it convinces me more than ever that this novel would make an excellent film project. We wrote the scenes in a very visual way, and Dev Pramanik’s artwork had enhanced our original vision even more.

KJA: Brian and I plotted the first prequel trilogy in the late 1990s, and we lived with that plot and those characters for so long, but since then we have written a dozen other all-consuming Dune novels set in different time periods of Frank Herbert’s future history, and we also wrote our original Hellhole trilogy together as well as a lot of solo projects.

This project with BOOM! allowed us to take a step back, like a homecoming, and revisit the very first runaway bestseller we wrote, the launch of this whole locomotive. Rereading House Atreides and then converting it to a new format was a very exciting process.