'Dune' (2021) writer confirms a concerning rumor about the movie 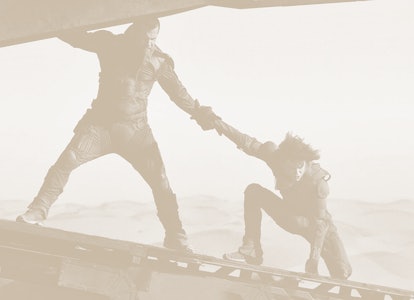 It’s official. The 2021 movie version of Dune will only tell half the story of the first novel. This means the long-awaited Denis Villeneuve sci-fi epic will almost certainly end on a cliffhanger, and it’s very possible this big Dune cliffhanger may never be resolved on-screen. At least not in a reasonable amount of time.

Have a series of big-screen Dune sequels become an outside possibility or a bankable certainty? In a recent interview Eric Roth — the co-screenwriter of Dune — makes it pretty clear what’s actually in the screenplay he worked on. Here’s what it might mean for the future of Arrakis.

Why Dune 2021 is (probably) destined to end on a cliffhanger

Speaking to Collider, screenwriter Eric Roth recently confirmed that the upcoming Dune film was specifically written as the first part of a two-part story. Here’s exactly what he said:

“It’s completely the first half. Yeah. I didn't know when we started, so I think I adapted a little more than the first half and started going into the second half of the book. But I've seen the film, it's pretty much the first half.”

Roth is one of three screenwriters on Dune, the other two being Jon Spaihts and Villeneuve himself. Elsewhere in the interview, Roth suggested that Spaiths — known for his work on Prometheus, Passengers, and the first Doctor Strange — would keep the film “grounded.”

As he reminded Collider, Roth is 76-years-old, and noted that although he wrote a treatment for the second Dune film (the second half of the book), he’s “done as much as I can do.” For movie-world context, Roth worked on the screenplay for Forest Gump, and most recently the biopic, Mank. Essentially, he’s a Hollywood legend with a knack for writing epic screenplays focused on larger-than-life characters. In other words, he’s perfect for Dune.

Will a Dune sequel happen?

The Colldier interview with Roth confirms that, as of this writing, Spaihts is thought to be writing a sequel to Dune 2021. However, whether or not that sequel will actually happen, and thus complete the story of the first novel, is very much up in the air. Villeneuve has gone on record saying that he thinks Dune heading straight-to-streaming is terrible news for the possibility of a sequel. Still, because the HBO Max/theatrical hybrid release of Godzilla Vs. Kong performed decently at the box office, there may be some hope that Dune will pull big theatrical numbers in October 2021.

Will those numbers be enough to warrant a sequel? Even if we did all the Spice in the world, we might not be able to see that clearly into the future.

Deciding what the “middle” of the book isn’t as cut and dried as one might think. Like Lord of the Rings, there are several appendices that could be incorporated into the actual screenplay, especially when it comes to the backstory of the character Liet-Kynes (Sharon Duncan-Brewster.)

That said, a good bet for a “halfway point” would be around the time that Paul and his mother, Jessica, are fully accepted as part of the Fremen; the people who live in the deep desert of Arrakis. In fact, the birth of Paul’s sister, Alia, feels like the right moment for the movie to end, because Alia is born talking and with knowledge of generations that came before her.

After this point in the novel, there’s a two-year gap in which Paul becomes the messiah to the Fremen, which sets up the climax and end of Dune. If this movie is going to end somewhere, it makes sense for it to end before this time jump.

Then again, it’s also possible the movie could end around the time that Paul and Chani (Zendeya) first fall in love, and Chani becomes pregnant with Paul’s son. To be clear this is not the same son, destined to become the God-Emperor of Dune in future books — and maybe the movies.

Alia has not been publicly announced as being in Dune 2021, which makes a little bit of sense only because the existence of that character is a borderline spoiler. But if the movie does end with a birth, then we’re looking at a very interesting finale for the film. Will such an ending feel complete? Or will it be done in such a way that audiences demand a sequel?

For those who fear that Dune 2021 might not get a sequel, it might be good to repeat the book’s familiar mantra, “fear is the mind-killer.” Then again, because of Earthly forces at work, and because Jodorowsky's Dune almost included Mick Jagger, it also might be a good time to repeat a different mantra: You can’t always get what you want.

CORRECTION: An earlier version of this piece noted that Paul and Chani’s first child was Leto II; the future God Emperor of Dune. This is incorrect. An earlier Leto, who died soon after birth, was the first child of Paul and Chani and not the same Leto who became the God-Emperor. The author conflated these Letos because of too much Spice. This error has been corrected.