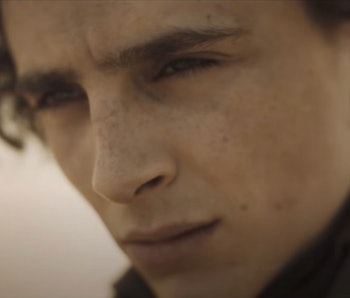 The biggest concern about a new Dune movie is whether or not it looks and feels right. The 1965 novel by Frank Herbert is considered one of the best science fiction novels of all time for good reason. The story is compelling and epic, and the world-building deeply immersive. So, for longtime fans, the first trailer is the moment where we ask ourselves: Does this work? Does this seem like legit Dune?

Now that the first trailer has dropped the answer is a big yes. Outside of the brilliant casting of Timothée Chalamet as Paul Atreides, the first full Dune 2020 gets two things perfectly correct. Mild spoilers ahead.

There's a lot to unpack here, but let's just call out two absolutely brilliant aspects of the trailer that are totally working.

The biggest badass in House Atridies is 100 percent Duncan Idaho, and the casting of Momoa in this role is actually a lot more brilliant than you might think. If you've read the book, you know that something happens to Duncan that might make you think he won't return in a sequel.

However, Duncan is the only character from the first book who reappears in all the subsequent sequels. Right now, he looks perfect in Dune 2020, but his battle cry "Let's fight like demons" may end up reverberating through several sequels. The swagger, the physicality, and the charm of Duncan is all on display in this trailer, and it looks totally perfect and faithful to the novels.

Smartly, the Dune trailer saves the giant Sandworms of the planet Arrakis for the very end. In the reality of Dune, the Sandworms are responsible for the creation of the substance known as "the Spice," which is basically why anyone wants to be on Arrakis at all. The Spice is created by the Sandworms, and dealing with the worms, and making peace with them is a huge part of what Dune is all about.

It's unclear which Sandworm scene this is from the book, but the look and scope of the worm feel correct. These are mysterious creatures in the world of Dune, but they are not monsters. In some ways, the Sandworms are the most important characters in Dune, and this Sandworm looks exactly as it should. The Maw of the Sandworms seems a little more refined, but overall, these are the worms we're looking for.