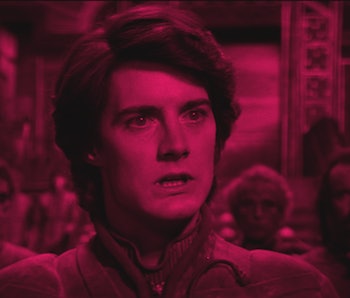 Even after Dune 2020 hits theaters, sci-fi fans will continue to associate the character of Paul Atreides with Kyle MacLachlan. It won't matter whether Timothée Chalamet is amazing in the role. So what MacLachlan says about Dune matters. Or, at least it does for sci-fi nerds who really can't get over the brilliance and the obvious blunders of David Lynch's 1984 Dune.

In a recent interview with IndieWire, MacLachlan says two movies might not really be enough to adapt the first Dune novel and speculates the story would be better told on TV. Here are three reasons he's right. Mild spoilers for Dune ahead.

One argument for doing Dune as a TV series is that the first novel contains a whole lot of essential background elements. For example, the motivations of Emperor Shaddam Corrino IV are not the main story of Dune, but if you don't explain why he's meddling in the politics of Arkais and House Atreides, you can get lost before you've even started.

In the interview, MacLachlan puts it like this: "It’s incredibly dense, and a little bit like a house of cards. If you leave out one element of the story or another, the structure tends to wobble, and you don’t get the full effect."

In terms of elucidating the politics that shape Dune, the house-of-cards analogy is correct. Even the 2000 mini-series didn't seem to have enough episodes. Ironically, the 2003 miniseries Children of Dune actually condensed elements from the later novels, rather than expanded them.

MacLachlan speculates the best way to do Dune would be "to approach it like a Game of Thrones model, where you have seasons, or at least a 10-part series, or a 12-part series. You could really go from beginning to end."

The success of Game of Thrones and The Witcher proves this correct. Even if the adaptations aren't 100 percent faithful, more of the story can be told. Though Dune is science fiction, its scope and warring houses feel structurally closer to fantasy. With the exception of The Lord of the Rings trilogy, fantasy movies have a lower success rate than fantasy TV shows. Arguably, this is because fantasy demands more time to really make its world-building stick. You can't imagine The Magicians as a movie.

Dune would benefit from more time, no matter how you look at it. MacLachlan's idea of "four or five more movies," feels like a smart compromise, but a long-running TV series is probably the best bet.

1. More time to find an audience

The Witcher was a smash-hit right away. Game of Thrones had mixed reviews in 2011. The Magicians TV fandom really started to blow-up around Season 2. All had huge followings thanks to the books, but the crossover into TV fandom isn't always immediate. You could argue that the only reason why The Witcher seemed to hit right away was that Game of Thrones primed the culture for that kind of thing. Even the new Lord of the Rings is headed to TV.

The mass audience who hasn't read the books needs to be won over. Gambling the Dune "brand" on one big blockbuster might not be the best way to sell this concept to the non-diehards. The history of genre TV has shown us it's possible to develop a massive following gradually, over a longer period of time.

Big sci-fi movies that bomb critically or financially (or both) are a different story. It took 35 years for a sequel to Blade Runner, and that's mostly because the 1982 movie was a box office flop. The 2017 Blade Runner 2049 (directed by Dune 2020 director Denis Villenueve) also tanked at the box office. None of this means that Dune will suffer a similar fate, but it does drive home one pretty big concern. If there's only one shot to convince everyone that Dune is awesome, it means the spice has to flow faster than it should.

Dune comes to theaters in December 2020.

More like this
Entertainment
8 hours ago
Everything we know about Dune: Part Two
By Gabrielle Bondi and Ryan Britt
Entertainment
6.21.2022 4:41 PM
Star Wars leak could reveal the star of Lucasfilm's next big movie
By Dais Johnston
Entertainment
6.23.2022 7:00 AM
The Boys Season 3 Episode 6 release date, time, plot, cast, and trailer for “Herogasm”
By Jeff Spry
Related Tags
Share: