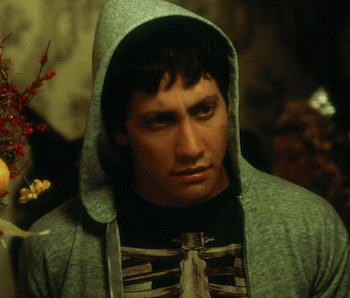 Why is modern sci-fi obsessed with the 1980s? Maybe it’s because the people who grew up in the ‘80s are running movie studios and streaming apps today. Or maybe it’s because the ‘80s represent the twilight of the pre-internet age and we’ve all realized being online has ruined our brains and our civilization.

Then again, maybe it’s because one of the greatest indie science fiction movies of all time nailed ‘80s revivalism 20 years ago, and pop culture has been trying (and failing) to live up to its legacy ever since.

On October 26, 2001, general audiences were introduced to Donnie Darko, Richard Kelly’s moody teen drama starring Jake Gyllenhaal as a high school student visited by a costumed specter warning him of the end of the world.

Though the film was a critical hit, it ended up as less of a success than the distributor may have hoped, grossing only $7.5 million on a $4.5 million budget, likely due in part to its release shortly following 9/11. Nonetheless, in the time since its release, Donnie Darko has accrued a cult following and carved out a permanent place in pop culture, launching the careers of both Jake and Maggie Gyllenhaal and introducing a staple last-minute Halloween costume.

The film follows Donnie Darko, a lonely teenager with depression and a sleepwalking habit. After being lured out of bed one night by a doomsaying rabbit named Frank and narrowly missing a jet engine falling on his bedroom in the process, he is manipulated by Frank as he reckons with the world’s imminent destruction.

The story is one of adolescent isolation made cosmic, with Donnie’s conflicting senses that he’s both the most and least important person in the world acting as parallels for the loneliness of growing up and the instinct to grasp at a narrative where your emotional turmoil means something. This is an approach that has perhaps become more relevant in a world where young people are both increasingly isolated and inundated with the idea that they alone must save the world.

Kelly makes the important decision to stage this against the backdrop of 1980s suburban America, intentionally invoking works like Stand By Me, The Goonies, and most directly E.T. with the intentional imagery of kids on bikes racing through the suburbs and the casting of Drew Barrymore, whose company also produced the film. These films, filled with extravagant homes in picturesque neighborhoods, regularly told stories about loss of innocence and the discovery that the world is scarier and more complicated than children could imagine. Despite this, there was often deference to the comfort of middle-class Americana as a part of that innocence that left this setting somewhat uninterrogated.

While these stories were reasonably produced by people who were adults during the 1980s, Richard Kelly was a teenager at the time, being roughly the same age in 1988 as Donnie. This colors the film from top to bottom. The era is reflected not through glamour and excess but as a period of tension, repression, and unspoken cruelty made literal in the recasting of ‘80s movie star Patrick Swayze as a manipulative pervert.

That Donnie and his sister Elizabeth argue with their parents about Michael Dukakis furthers the sense that this is not a romantic reflection on the period. Kelly presents a far more internal perspective of the destruction of innocence than the films of the period, tying Donnie’s discovery of the world’s complexity to his growing adolescent malaise.

While less of a presence in 2001 when Donnie Darko released, in the last decade, ‘80s nostalgia has become enormously popular and, as a result, incredibly lucrative. Stranger Things is the most popular show on Netflix (or at least, it used to be), and Andy Muschietti’s adaptation of It moves the timeline of Stephen King’s original book to set the main plotline in the ‘80s.

Both of these recent works riff on many of the same stories as Donnie Darko, albeit in a much more idealistic way. Unlike Kelly’s film, which reflects the era as something circumstantial to be lived through, these newer works present ‘80s suburbia as aspirational, relishing in the iconography and gleefully lifting from the period in intentionally unsubtle ways.

The difference between these modern reimaginings of ‘80s childhood and the stories they homage is their priorities in terms of character. While these classic entries are often ostensibly coming-of-age stories, this is generally approached in the abstract with their journey representing something grander as opposed to digging into the characters themselves.

On the other hand, Stranger Things and the modern It are heavily character-focused with the former especially using its supernatural elements almost entirely as a catalyst for drama. In this sense, Donnie Darko is the missing link between the original texts and their romantic reimaginings, specifically in the approach to the internality of its characters.

This is why the film remains so timeless despite its intentional setting and the references it makes to the culture of the time — especially in its soundtrack. It is markedly not a film about the 1980s or an intentional attempt to remind people of things they already liked. This is a balance that later similar works have equally had to walk, often leading to different results. It’s a personal story grounded in emotions its filmmaker experienced at the time, and its approach to referencing the era works to suggest the way that perspective abstracts those elements from what people might rather remember.

More like this
Entertainment
6.30.2022 1:58 PM
Stranger Things Season 4 Volume 2 release date and time, trailer, runtime, episode length, spoilers, theories, and more
By Jeff Spry
Culture
2 minutes ago
15 years ago, Michael Bay made the most overrated sci-fi movie of the century
By Andrea Thompson
Entertainment
6.29.2022 10:30 AM
25 years ago, Nic Cage made his most explosive sci-fi movie ever — it was almost even better
By Jake Kleinman
Related Tags
Share: