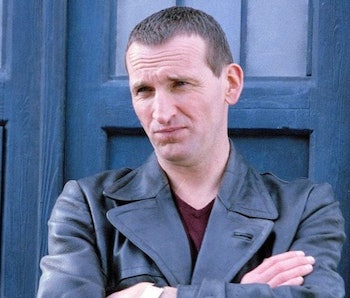 For casual Doctor Who fans, audio adventures aren't high up on the priority list. But for more than 20 years, Big Finish has crafted elaborate radio plays on CD and digital. Their storylines usually lie outside of the televised arcs, and sometimes include all-new characters. Christopher Eccleston will return to his role as the Ninth Doctor for a collection of audio adventures with Big Finish, and the consequences for Doctor Who canon could be massive. Here's why.

Doctor Who storytelling is unique. While multiple actors share and pass along the role, the audio adventures allow each doctor to release their own line of stories without worrying about continuity. So while the Tenth Doctor, David Tennant, records Time Lord Victorious inside his garden shed, the Fourth Doctor, Tom Baker, can participate in Shadow of the Sun over Zoom.

This allows for a whole new method of canonical time travel. If there's an aspect that needs to be introduced in the past of The Doctor's life, it can be inserted into an adventure of a previous Doctor, giving precedence for later. Usually, audio adventures aren't used to help explain the televised stories, but a big-ticket appearance like Christopher Eccleston could provide an excellent opportunity for some retroactive foreshadowing.

Doctor Who's Season 12 finale was divisive, to say the least. For decades, it was thought The Doctor was one of many Time Lords from the planet Gallifrey. They were a rebel, stole a Tardis, and have been traveling the universe ever since. However, the finale completely undid that lore and revealed The Doctor was actually the first-ever Time Lord.

While some fans thought erasing what viewers, and The Doctor, knew of Gallifreyan history was dishonoring the show's 57 year past, others thought wiping the slate clean would introduce a new community of viewers to the show. It still felt kind of out of nowhere, though. That's where The Ninth Doctor Adventures can help.

These stories could hint at the fact The Doctor isn't who he thinks he is, and even reveal everything, but have him be in denial. This could explain why The Doctor is so quick to believe this new story, even when it comes from their rival The Master. It would add some extra credibility to a gigantic plot twist we've only just learned about.

By inserting clues about the Doctor's true origin into one of these stories, Doctor Who can kill two birds with one stone. First, they can add some worldbuilding so the finale doesn't seem so out of left field, and secondly, they can introduce the audio stories to the previously television-only section of fans. Plus, there's nothing like a little dramatic irony to add to a story. We've seen this Doctor's future, so we know what's coming.

This seems like the logical step for Doctor Who, a show that relies on time travel chicanery and making things work in the past from the future, and could quell a lot of upset from fans, all while incorporating a much missed actor, even if we don't get to see him.