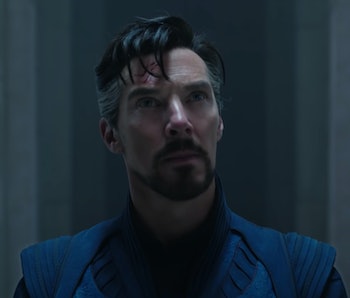 Marvel Studios has drastically expanded its cinematic universe in new and unexpected ways over the past year. That trend continues in Doctor Strange in the Multiverse of Madness, a film that sends its characters crashing through multiple universes across its 126-minute runtime. One of the film’s standout sequences even shows Stephen Strange (Benedict Cumberbatch) and America Chavez (Xochitl Gomez) falling into a reality where they turn into splatters of moving paint.

While the film does a good job of showing just how diverse the makeup of Marvel’s multiverse is, it also makes it clear that certain things are true in every universe. The love Wanda Maximoff (Elizabeth Olsen) feels for her children, for instance, is a constant, as is Stephen Strange’s penchant for breaking the rules.

As certain keen-eyed Marvel fans have noted, one line in Multiverse of Madness even bridges the Marvel Cinematic Universe to Fox’s abandoned X-Men timeline.

A Familiar Phrase — During Multiverse of Madness’ Illuminati sequence, Stephen Strange shares a brief but notable interaction with none other than Professor X (Patrick Stewart). The moment sees the X-Men leader go against the wishes of his fellow Illuminati members by telling Strange how to find the Book of the Vishanti. When an enraged Baron Mordo (Chiwetel Ejiofor) tells him that Strange cannot be entrusted with such information, Stewart’s Charles politely disagrees.

“I believe he can,” Xavier says, adding, “Just because someone stumbles and loses their way doesn’t mean they're lost forever.” It’s a line that not only supplies Strange with some necessary information, but also establishes that the Illuminati version of Charles Xavier is just as wise as fans likely hoped he’d be.

In case that’s not enough, Charles’ mention of Strange stumbling and losing his way also happens to be a line that Marvel fans have already heard Stewart say on-screen.

We Are Who We Are — In 2014’s X-Men: Days of Future Past, Patrick Stewart’s Charles Xavier experiences a brief psychic meeting with his younger self (played by James McAvoy). During the scene, McAvoy’s Charles expresses despair over the future and wonders if his efforts to try and sway humanity over to the mutants’ side are pointless. Stewart’s Charles explains to him that hope is never lost. “Just because someone stumbles and loses their way doesn’t mean they’re lost forever,” he says.

In other words, Stewart’s Charles gives Benedict Cumberbatch’s Stephen Strange the same piece of wisdom in Multiverse of Madness that a variant of himself gave in Days of Future Past. On its own, that creates a direct link between the MCU and Fox’s X-Men universe. The reference also suggests that the prime version of Charles Xavier viewers may be introduced to in the MCU may have more in common with Stewart’s take on the character than fans expect.

At the very least, the film’s use of one of Stewart’s previous Professor X lines seems to indicate that Marvel has a great deal of respect for the actor’s other iteration of the character.

The Inverse Analysis — Marvel fans have been speculating for years about how the studio will bring mutants into the MCU. For now, that mystery remains unsolved. However, this Multiverse of Madness Easter egg proves that the film’s acknowledgment of Fox’s X-Men franchise goes beyond just Stewart’s return as Professor X.

The fact that he reuses a Days of Future Past line in Multiverse of Madness suggests that Fox’s X-Men universe may even exist as one of the realities in Marvel’s expansive multiverse. Marvel has yet to confirm if that’s the case, but if it is that opens the door for the studio to bring back other Fox X-Men characters in the coming years.

Either way, Multiverse of Madness makes it clear that, no matter what universe he's from, Stewart’s Professor X will always be the wisest person in the room.