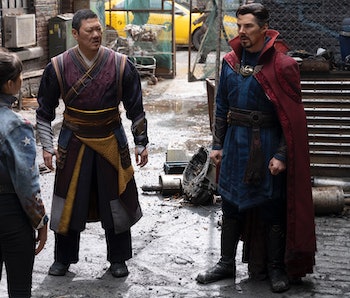 Since Doctor Strange and Spider-Man cracked open the multiverse in No Way Home, fans have eagerly awaited the next Marvel movie to deal with the ensuing consequences. The title alone, Doctor Strange in the Multiverse of Madness, tells us that the superhero sequel will deliver a world-hopping adventure while trailers and rumors tease surprising twists and cameos. But with all the excitement the movie promises to offer, will viewers be able to watch Doctor Strange 2 on Disney+?

For fans who hope to see the Doctor Strange sequel at home, you may be able to stream the movie sooner than you think. We break down when you could expect to see the Marvel Cinematic Universe officially enter the multiverse on Disney+.

When is Doctor Strange 2 coming to Disney+?

In 2021, Marvel Studios and Disney released three feature films: Black Widow, Shang-Chi and the Legend of the Ten Rings, and Eternals. The Scarlett Johansson-starring film debuted simultaneously in theaters and on Disney+. However, Shang-Chi and Eternals received exclusive theatrical releases before making their streaming debuts about 68 to 70 days after their premiere.

Now that it’s 2022, has that changed? It doesn’t seem so. Doctor Strange in the Multiverse of Madness will only be playing in theaters when it releases on May 6, and Marvel has not yet confirmed when the sequel will land on Disney’s streaming platform.

However, because Doctor Strange 2 will likely have a 45-day theatrical run — just like Shang-Chi and Eternals — we can expect the new Marvel movie to follow the previous films’ example. That means viewers may be able to watch (or re-watch) Multiverse of Madness on Disney+ as early as June 20 — if it premieres right after its 45-day theatrical window — or July 15, which is about 70 days after its May 6 release.

Where can I watch Doctor Strange 2 right now?

Starting May 6, you can watch Doctor Strange in the Multiverse of Madness at a movie theater. The Marvel movie will have a wide theatrical release in the U.S. and internationally (although it is banned in certain countries). If you haven’t already bought your tickets and reserved your seats, it should still be pretty easy to find showtimes at your local theater.

While some of us can’t wait to see Doctor Strange, Scarlet Witch, and company take on the multiverse; it’s totally fine if you prefer to wait until summertime to experience the madness at home on Disney+.

Doctor Strange in the Multiverse of Madness arrives in theaters only on May 6, 2022.