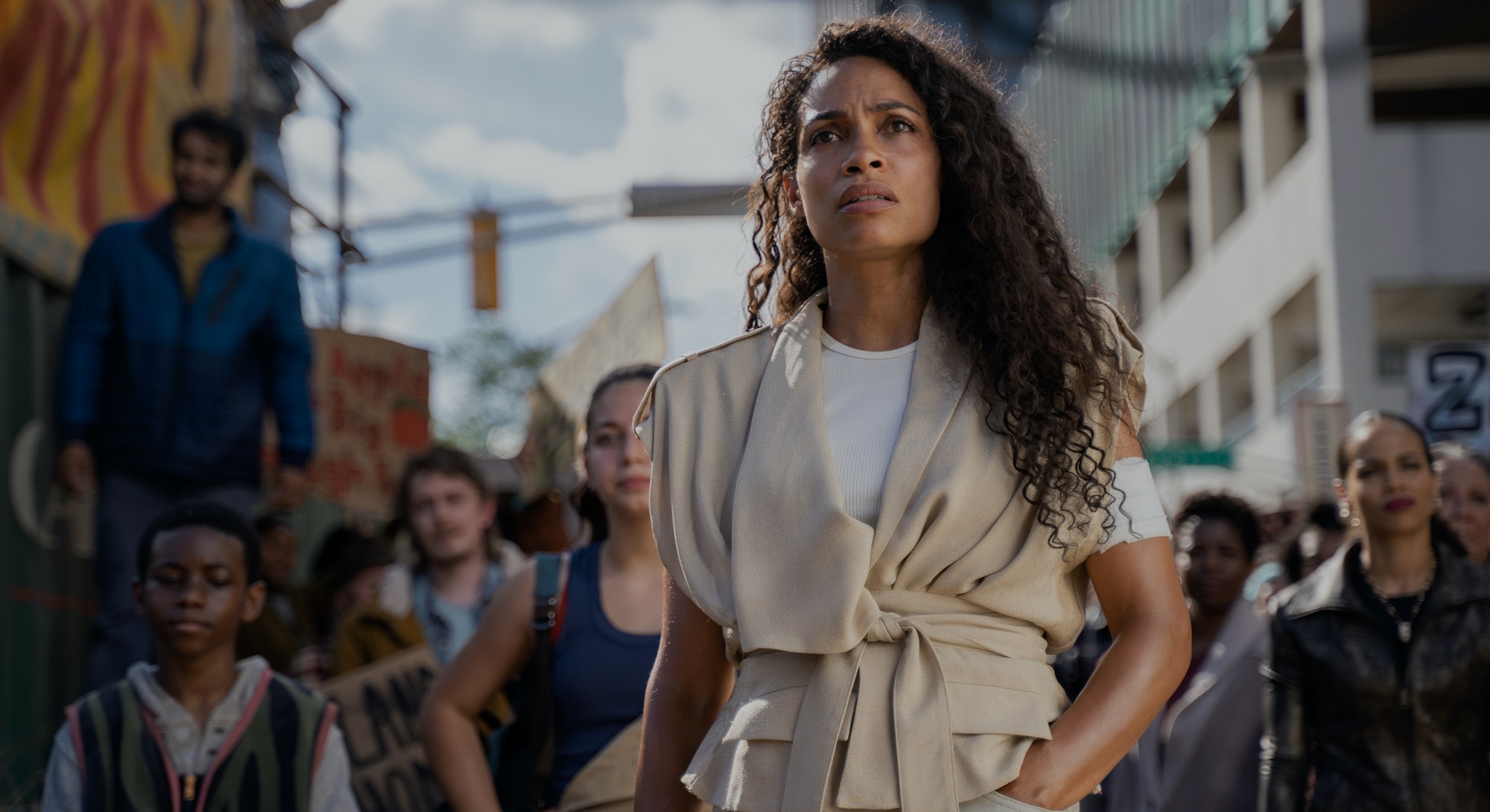 The Second American Civil War, as interpreted by the HBO series DMZ, is full of neighborhood barbecues and block parties.

The atmosphere is lively and a sense of community is palpable. The aromas of cooked meat and the rhythms of 808s and Heartbreaks-era Kanye contrast conventional images of dystopian America, wherein the likes of The Walking Dead trafficked in decay and madness. Here there’s an array of colors, from the food to the people. There’s life here because people foster it. Humans have a habit for caring for what little they have.

Such is DMZ, a new four-episode miniseries based on the acclaimed comic book series from now-defunct Vertigo (formerly the prestige imprint from DC Comics). In its original run starting in 2005, DMZ was a sharp thriller that tapped into post-9/11 paranoia, specifically a restrictive New York under Giuliani. Notions that authoritarianism turns inward in the face of outer existential threats felt like speculative horror rather than the prescient warnings they are now.

As an HBO series developed by Ava DuVernay, however, the show feels both overly obligated to Be Relevant, and tragically out of touch. A 72-issue comic is smushed into four hourlong episodes, and things still feel long. Its scope also feels limiting; despite intentions to immerse viewers in an independent New York ruled by warlords and gangs, there’s never an identity of the place other than the mere sights and sounds of the people inhabiting it.

In DMZ, short for demilitarized zone, eight years have passed since the last evacuation of New York. The Second American Civil War — waged between the United States and the secessionist “Free States of America” — have left all of Manhattan Island as neutral territory. Some 300,000 New Yorkers now fend for themselves, which has led to territorial gangs (many uniformed and organized à la The Warriors) and urban legends of cannibals. In the beginning, hospital nurse Alma (Rosario Dawson) lost track of her teenage son, nicknamed Skel (Freddy Miyares). Her search for him brings her into a power struggle between warring charismatic leaders, played by Benjamin Bratt and Hoon Lee.

DMZ makes tremendous changes from the comics — main character Matty Roth, a photojournalist, is nowhere to be found — which feels like intentional distance. The comic’s primary creator, Brian Wood (who collaborated with Riccardo Burchielli) has been accused of sexual misconduct by several women. His name only appears in the end credits, and not explicitly as the creator of DMZ.

DMZ is an adaptation, and stretches that word as far as it can without snapping it. Sadly, the replacement story is as unfulfilling as it is simplistic and banal. In placing a premium on rudimentary family dramatics and weak-kneed Shakespearean tragedies over cerebral politics, DMZ is rendered dull. The predominant darkness lacks meaning and resonance. An ineffable geopolitical conflict that looms over everything and everyone only means audiences are left to scavenge for purchase in hostile territory.

Acclaimed filmmaker Ava DuVernay developed the series and helmed its first episode as director; Ernest Dickerson, whose career spans decades on shows like Heroes, Weeds, Dexter, and Raised By Wolves, oversees the rest.

While DuVernay’s pictures speak to a powerhouse with a voice, from 2014’s Selma to her tragically necessary 13th, her TV work consists of shrugs. For every When They See Us, there’s a Home Sweet Home, DuVernay’s saccharine reality show about people swapping houses. On TV DuVernay demonstrates little of the same skill she’s shown on film, and in DMZ she — and Dickerson, who picks up the baton — fail to immerse audiences. Both are keen on handheld close-ups, which not only casts DMZ as derivative of lesser programming but disserves what should have been DMZ’s best asset. You cannot understand how important this stretch of New York is supposed to be for its people when there’s hardly a good look at what these characters fight for. Everything seems small.

Where DuVernay excels as a director is in extracting the right performances out of her actors. She succeeds here, mostly. DMZ represents the most exciting work ever from Rosario Dawson, whose cold fury as a mother oozes through the screen. Hoon Lee also proves he’s one of the most underrated actors of his generation. As Wilson, Lee effortlessly transforms from suave to slime with authoritative masculinity that’s textured and rare for an English-speaking Asian male lead. There’s little stereotyping here, save for the exoticized decorations of his Chinatown domain. Benjamin Bratt is deliciously gooey too, though at times his Tony Montana-like presence feels out of sync from the wavelengths the other actors transmit.

DMZ should be more important than it is. Its creative lineage commands the might of DuVernay, and its cast envisions a New York that actually looks like New York. A production design replete with colors inject spice into a genre that favors dull browns, grays, and pale blues. There are banging needle drops. But the totality of DMZ fails to capitalize on this moment, when authoritarian regimes have come close to fulfilling their goals. The emotionally-driven story at the center is indistinguishable from a soap opera, and the reliably engaging performances of the cast are never fully weaponized. This is a no-fly zone. When approaching its borders, prepare to retreat.