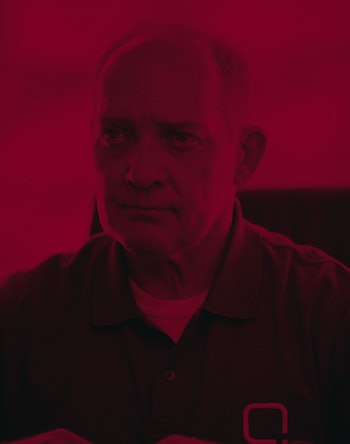 1) What happened to Lily's missing boyfriend Sergei? And 2) what the heck is going on in Amaya's super-secretive coding department? Both of these questions are answered to varying degrees in Devs Episode 2, which features a violent cover-up perpetrated by Kenton (Zach Grenier), the company's cold-blooded head of security.

The second episode of Devs’ two-part premiere also solidifies Amaya’s ruthless security chief as one of the best enforcers we’ve seen on television since Mike Ehrmantraut (Jonathan Banks), the brutal ex-cop introduced in Breaking Bad as a “fixer” for series villain Gus Fring.

Warning! Spoilers ahead for Devs Episode 1 and 2.

After Sergei attempts to steal top-secret code from the Devs lab at the end of Episode 1, Forest (Nick Offerman), the company's CEO, confronts the coder in the dead of night amid a section of trees adorned with glowing halos. We're assuming these lights were definitely put there to guide the members of the Devs team back to Amaya's campus and to totally not make Offerman look like a morally conflicted angel, but who knows?

Angel or devil, morality plays an odd part in this story world. As Forest offers forgiveness to Sergei, the tech mogul gives a brief glimpse into his jaded world-view — one which is both godless and deterministic. Forest explains that Sergei's decision to commit industrial espionage was not a choice, but more so the result of a cause — or a collection of criteria — that ultimately formed him into the person he became. For Sergei, committing this crime was always in the cards, an act that was dictated by a grander plan well beyond human control.

After absolving the young man of his sins, Forest steps back to watch Sergei run into the maw of trees before him, only for Kenton to appear out of nowhere and tackle him to the ground, stuff a bag over his head, and suffocate him to death.

This is how Sergei dies. You know this. I know this. But it's a mystery that is largely unanswered when Lily is given the news that her boyfriend had perished. Instead, she's presented with (doctored) security video footage showing the coder leaving the Amaya campus only to return 48 hours later to douse himself in gasoline and light himself on fire.

It's jarring imagery that leaves Forest visibly shaken. But for Kenton, who obviously helped create the false footage in question, this is just another day at the office. The series has yet to reveal his backstory and motivations, but much like Mike Ehrmantraut (Jonathan Banks) before him, Kenton here is Devs' quintessential cleaner.

And yet, while Breaking Bad and its prequel series Better Call Saul fleshed out the corrupt cop's emotional foundation, giving viewers a better understanding of the driving factors that inspired Mike to break bad in his own ways, the jury is still out on Kenton.

Devs isn't Breaking Bad. The cold-blooded nature in which Kenton supports Forest's mysterious work, whether it's through stone-faced intimidation tactics or the confrontation-turned-fight to the death that plays out between him and Sergei's Russian handler (yep, it turns out Sergei was a Russian spy all along), becomes even more unsettling when the human element is completely left out of his character equation altogether.

In this parking garage sequence at the end of Devs Episode 2, we're given a better understanding of Kenton's experience with international threats as he tries to come to an accord with this enemy in a peaceful manner. Of course, that's not how things play out. A sloppy fight ensues. One would assume that getting a surprise stab to the gut could slow a person down, but the sneak attack flips a switch for Kenton who ends up snapping the guy's neck against the weight of a parked car, all while stuck in a chokehold.

Is Kenton a psychopath? Maybe. Is he a force to be reckoned with? Absolutely. But what is it that ties him to Forest? It has to be more than money. Episode 2 alludes to a history between the men, and while they don't come off like close friends, there's an established camaraderie.

Forest is the Gus Fring (Giancarlo Esposito) to Kenton's Mike. But when Forest says jump, Kenton doesn't even bother asking how high — he just leaps with all his might.

We're still at the beginning, but Devs has already given us a fascinating character in Kenton. Like Mike Ehrmantraut before him, Kenton seems to carry a jaded distrust of the world. This would make sense, given the line of work he's found himself in. But while Mike's disenfranchised perspective puts him in lock-step with Amaya's security officer, Kenton's calculated, goal-oriented focus makes him an underestimated threat to Lily as she digs further into Sergei's death. Unlike Mike, he might just be the true villain of the story.

Instead of muddying the waters with questions, Kenton recognizes that Amaya has an established hierarchy. If one were to look at the Amaya campus as an insular world that operates on the rules of determinism, as Forest previously explained them, then Kenton's role to get things done, no matter the cost, takes on a whole new meaning. He's the deterministic punishment waiting to be handed down. There's no right or wrong; no good or evil. There’s just Kenton.

Devs releases new episodes on Thursdays via FX on Hulu.