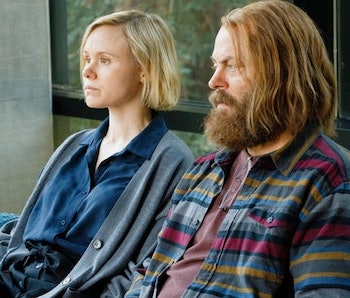 Alex Garland’s FX limited series Devs is a heady meditation on the concepts of determinism and free will. The show focuses on a shadowy research division of a Silicon Valley tech company called Amaya, which is working on experimental tech that allows users to see individuals past and future actions. The final episode delivered some stunning twists, leaving the fate of the woman who runs this experimental operation, Alison Pill’s Katie, very much in question. In a recent conversation with Inverse, Pill shared her thoughts on Devs’ ambiguous ending and how Katie compares to Amaya’s enigmatic CEO, Forest (Nick Offerman).

Spoilers ahead for the Devs finale.

Katie and Forest regard technology as a kind of religion, and Garland plays with religious motifs throughout the series. The mysterious computer at the center of the story allows users to see an individual’s past and future. Turns out, the project doesn’t take its name from the short-hand for “developers.” Instead, that English V is a Latin U, for “Deus.” The project itself essentially envisions God as a machine.

Looking back on the finale episode, Pill says that Katie was even more devoted to this belief than Forest himself.

“Katie had fewer doubts than Forest. Katie is a true believer in determinism, as is Forest. He's a true believer because he truly hopes that he couldn't have done anything differently to stop the death of his daughter,” she explains. “Where they differ is in the depth of their belief in determinism, and Katie does harbor some suspicions about many worlds that he won't even consider.”

From Pill’s perspective, Katie’s deeply held convictions about determinism were what sent her reeling at the final episode's big twist: Forest's memory lived on within a simulated world inside Deus, and he continues to exist within multiple worlds.

“Because Katie’s a much more devoted believer, that’s why the shock of the discovery at the end is so world-shattering to her. It's an upside-down world at that point, the idea that free will is even a possibility,” Pill added.

Even though Katie survives to the end of Devs, Pill doesn’t see her character’s ending as a particularly happy one.

“I think she might continue to oversee the development of the everything machine, to be leading the kind of monastic depth Devs cube life and translating their discoveries to government officials,” she says. “I don't think she leaves the cube ever again. She might just live there now.”

All eight episodes of Devs are streaming now on Hulu.

More like this
Entertainment
8.1.2022 2:00 AM
Westworld Season 4 just copied one of the best Doctor Who episodes ever
By Ryan Britt
Entertainment
8.9.2022 1:00 PM
Has your favorite HBO Max show been canceled? The fate of 9 sci-fi series revealed
By Robin Bea
Entertainment
7.27.2022 4:15 PM
Everything we know about Rick and Morty Season 6
By Corey Plante
Related Tags
Share: