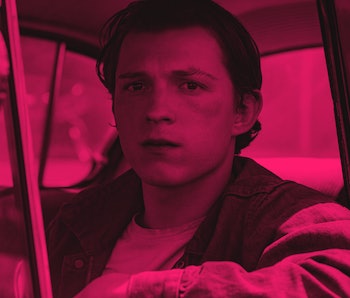 The Devil All the Time is a difficult movie. It's full of violence and pain from start to finish, but in the final moments of Netflix's new movie, there's a glimmer of hope. Or is there? To find out what The Devil All the Time's ending means, we spoke to the movie's director Antonio Campos, who explained that final scene and what comes next.

Warning! Huge spoilers ahead for The Devil All the Time.

If you're reading this but you haven't seen the movie (first of all, why?) or you already forgot how it ended, here's a quick refresh. After killing just about everyone else in The Devil All the Time, Arvin (Tom Holland) ends his murder spree by killing a crooked cop played by Sebastian Stan (to be fair, Seb had it coming). Then, Arvin makes it to a highway and hitches a ride. As he sits in the passenger seat and tries not to fall asleep, we hear an address on the radio from the President of the United States announcing that even more troops will be sent to fight in Vietnam (remember, this is happening in the '60).

What does it mean? Is The Devil All the Time trying to say something deep about the nature of American violence? Is this a hint that Tom Holland's character only escaped one tough situation to be drafted into the Vietnam War? According to director Antonio Campos, the answer is, "both."

From a thematic perspective, The Devil All the Time's ending connects neatly with its opening scene, which shows Arvin's father (Bill Skarsgård) encountering a soldier who had been skinned alive and crucified during WWII.

In other words. The Devil All the Time's ending puts Tom Holland's character on track to become just as messed up as his dad.

As for what specifically happens next, that's a bit more open-ended.

Campos continues: "We're left wondering, will Arvin be one of those traumatized veterans? Or will he go down another path? Will he get out of this cycle that he's been stuck in that Willard was in before? So the end of the movie is not giving an answer but posing a question and leaving the door open for you to decide."

Another recurring theme that bookends The Devil All the Time is religion. The image of a crucified man clearly traumatizes Skarsgård's character, and he brings that experience into his own obsessions with the cross. Like the rest of his trauma, this is passed on to his son. But according to Campos, the movie's ending represents a break in that cycle.

"You start with the image of a cross on a hill, you end with a boy walking away from a cross," he says. "In both cases, the image of the cross isn't necessarily an image that we're trying to imbue with the religious weight of what a cross is, it's really a personal relationship."

In the end, Tom Holland's actions suggest he's moved beyond his father's obsession with the cross, even if he's about to be sucked back into the violence that traumatized his dad in the first place.

"At the end of the movie, Arvin is wondering whether or not he should pray on something and decide," Campos says. "It's leaving it open to the audience's interpretation. Is there a grand design or is everything by chance?"

The Devil All the Time is streaming now on Netflix.

More like this
Entertainment
6.24.2022 1:00 PM
Umbrella Academy Season 3 ending explained: How it sets up Season 4's biggest crisis
By Jake Kleinman
Entertainment
6.23.2022 11:00 PM
The Black Phone ending explained: Are the ghosts in Joe Hill's story real?
By Eric Francisco
Culture
6.30.2022 11:30 AM
You need to watch David Fincher's most important techno-thriller before it leaves Netflix this week
By Eric Francisco
Related Tags
Share: