“We keep things locked up, and they end up eating us from the inside.” 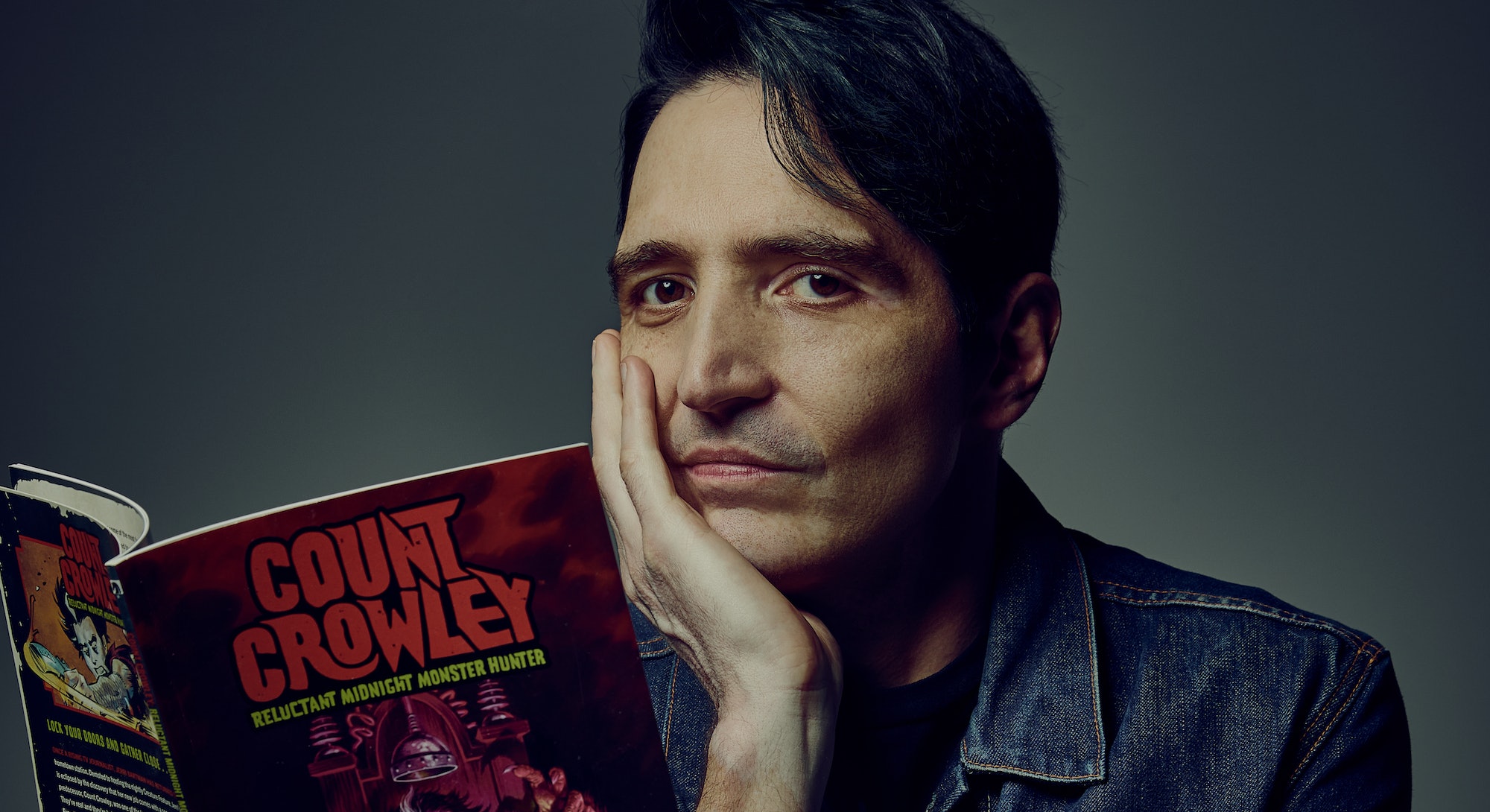 “They were the introduction I had into another reality,” the actor tells Inverse. “Especially when my reality became unbearable.”

Little did he realize, he was preparing for a future in some of the biggest movies of the 21st century.

Dastmalchian’s first onscreen role was playing a paranoid schizophrenic interrogated by Aaron Eckhart’s Harvey Dent in Christopher Nolan’s The Dark Knight. To Marvel fans, he’s known as hacker Kurt Goreshter in both Ant-Man films. He’s also captured attention as a tech in Blade Runner 2049, a villain in Bird Box, and most recently, as the human-computer Piter de Vries in Dune.

But Dastmalchian is more than just a memorable actor. In 2014, he wrote and starred in the acclaimed drama Animals, inspired by Dastmalchian’s life as an addict. And, on March 23, his Count Crowley: Amateur Midnight Monster Hunter for Dark Horse Comics — the second in the series — is getting released.

As a child, Dastmalchian suffered from undiagnosed mental illnesses and depression, and he witnessed a “pretty tumultuous divorce” between his parents that took “years to resolve.” He spent several years of adulthood addicted to heroin before undergoing rehab.

“I grew up and started to face real monsters, real demons in the real world.

“[Creature Feature] gave me the safe space on Friday nights to watch classic Lon Chaney and Boris Karloff and Ed Wood pictures in the comfort of my living room.”

Dastmalchian talks of Crematia Mortem as though she were a real friend — and, in some ways, she was. “She kind of led me into this otherworldly realm where I got to pick my imagination, and it wasn’t that much later that I discovered the power of comic books.”

Dastmalchian explicitly pays homage to Creature Feature in his comic book. Count Crowley tells the story of Jerri Bartman, a once-promising TV journalist who takes up a job hosting a low-budget horror show in her midwest hometown.

Jerri soon learns that the gig is a front for a more dangerous hustle: protecting the world from genuine supernatural threats.

“I would watch Crematia Mortem and thought, ‘How cool if there was a horror host actually fighting monsters?’” Dastmalchian says. “I grew up and started to face real monsters, real demons in the real world.”

“I saw so many manifestations of monstrous behavior that the story [of the comic] started to take on a more important life,” he says. “This weird time where anybody reporting facts people didn’t like was ‘fake news.’”

Dastmalchian imagined a scenario where the typical tools against the supernatural — like silver bullets and wooden stakes — were “fake news.”

“In the world of Count Crowley, you learn all this information has been spun into our reality, so we don’t know how to defend ourselves,” he explains.

The first volume, Count Crowley: Reluctant Midnight Monster Hunter, was published in 2020. “If you can imagine walking into a comic shop, as somebody shopping in comic shops for his entire life, to see the cover of a comic that says your name, it's hard to fathom,” Dastmalchian says.

The sequel, Count Crowley: Amateur Midnight Monster Hunter, was written during the pandemic as a way for Dastmalchian to cope with lockdown blues. Left with nothing to do, much like the rest of the world, he turned to his lifelong adoration for comic books, an art form he credits for helping him stay clean. When he got sober 20 years ago, Dastmalchian worked at a seafood restaurant in his hometown, Kansas City.

A quiet life with weekly comics and DVD rentals was how he envisioned his Hollywood ending. “I had barely survived,” he says. “I was so grateful to wake up in the morning and not need a fix. The ultimate joy was a good day at work.”

It was perfect. “Get a coffee every day, read comics and watch movies, and just live.”

Dastmalchian’s father (who passed a week before the actor-writer spoke to Inverse in October 2021) was his first hook-up for comics. His first purchase was The Avengers #249.

“It’s the Avengers against Maelstrom,” Dastmalchian raves with childlike energy. “If you look at the comic, you can see tracing lines. I would put typewriter paper over it and trace them to do my own drawings.”

“...he not only embraces his strangeness, he turns it into a superpower.”

That issue of Avengers is still one of his most prized possessions. In 2015, when the actor was on the set of Ant-Man, he had it with him for one very specific reason. “I brought the comic with me when we were shooting Stan Lee's cameo,” the actor says.

“We sat in a trailer, me and [director] Peyton [Reed] and Stan and Paul Rudd. Stan showed us a bunch of amazing early drawings,” he says. “I told him about my first comic. I just had a son, and he asked me what my kid’s name was. I said, ‘It’s Arlo.’ He took my Avengers and wrote, ‘To Arlo, your friend Stan.’ I’ve got it framed in my house.”

Sitting on a movie set with Stan Lee was just one step of a long, continuing journey. It was a path that began when Dastmalchian returned to acting in Chicago theater, performing in productions of Oscar Wilde’s Salome and Othello. Eventually, he had enough courage to audition for his first on-camera speaking role.

The budding actor saw his lifelong love for comics and his then-recently-renewed love for acting synergized by a single, must-land role as a masked member of the Joker’s heist crew. He didn’t get the part. “I was devastated. That was my opportunity to work in film. And the fact it was a Batman movie? Heartbreaking.”

But four months later, he got a different call. He was cast in the film as “Thomas Schiff,” a lackey who takes the fall for the Joker. With that role, Dastmalchian pulled audiences into his orbit. He appears pale and sweaty on the screen, with eyes so wide you could read his fear and fervor like a book. It’s a small part, but it’s the role Dastmalchian credits for changing “my entire existence.”

Dastmalchian’s more recent foray into the DC Universe is a role that’s closer to his heart: his Suicide Squad character Abner, aka, Polka-Dot Man. Abner’s abusive mother infected him with an alien virus to try to make him into a superhero, which left him covered in polka dots and pustules. He is mocked and ridiculed because of it.

Dastmalchian himself has vitiligo, an autoimmune disorder that affects a person’s melanin, resulting in white patches or swaths on their skin. It’s a condition that feels uncomfortably close to Polka-Dot Man’s ailments, where toxic shapes accumulate throughout the character’s body.

“I connected with Abner from his first line,” he says. Dastmalchian sees Polka-Dot Man as an avatar for triumph against one’s insecurities.

“I love that Abner came to a point where he not only embraces his strangeness, he turns it into a superpower,” Dastmalchian says. “That’s what we all can do. We have things about ourselves that make us insecure, that make us ashamed. We keep things locked up, and they end up eating us from the inside.”

“We can do the work, get therapy or connect with people that help expel those viruses,” he explains. “We can love ourselves and figure we are meant to be the way we are. We’re fucking superheroes.”